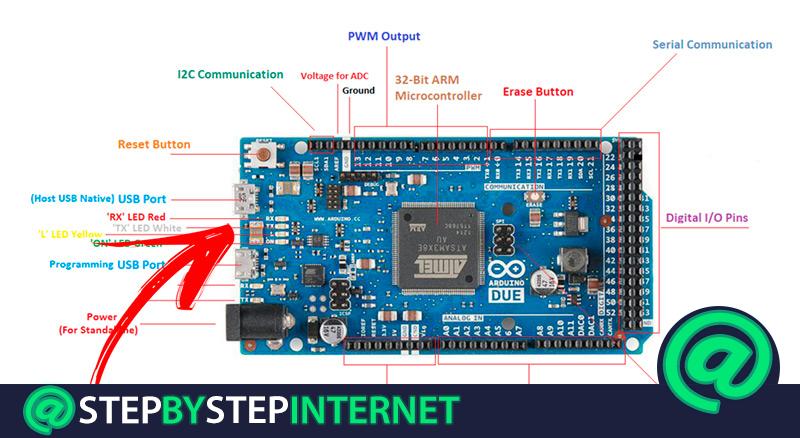 One of the most powerful boards that Arduino offers is the DUE version. Thanks to its microcontroller, its memory and the number of pins it has, it is one of the most sought after when complex projects are needed.

For this reason We have prepared this article so you can know what this type of plate is for and what are the main characteristics offered to users.

In addition, we will explain what you should take into account When working with an Arduino DUE, how does the development environment differ for the programming of the board. Check out.

What is Arduino DUE and what are these free development boards for?

Arduino DUE It is a board that has an Atmel SAM3X8E microcontroller, offering extra performance for large projects. This criterion is also supported by a more digital pins input and output and analog pins. Works with a voltage of 3.3V and has 4 ports for hardware, of which 2 are for cables MicroUSB which are used to connect the board with the computer. Arduino DUE operating systems can be used Windows, Linux and MacOS.

Characteristics of the Arduino DUE What are its most interesting features?

The main features that Arduino DUE has are:

What to keep in mind when working with an Arduino DUE board?

Read moreHow to create and add custom emojis in Slack to make your conversations more fun? Step by step guide

The first thing to keep in mind is that this board works with a current of 3.3V, so it maintains a great difference with most of the 5V Arduinos. Therefore, you must be careful not to burn the MCU, memories and other components due to an over voltage.

Another issue that you should take into account, although a little less, is its size and weight. By last, you should consider all the digital and analog pins you have available (By this we mean the need your project has for occupy everyone, since if less is required you could opt for another less expensive 5V plate).

Is the development environment (Arduino IDE) different for Arduino DUE boards?

The Arduino DUE environment is no different than the rest of the boards you just have to keep in mind that the SDI has configured for Arduino UNO board, so you must change the type of Arduino in the program.

For this you will have to follow these steps:

Usefulness of the board In which projects can the Arduino DUE be used?

You can use the Arduino DUE board in a lot of projects.

For example, you can create:

Further, If you want to know a project in detail you can create a game of Zeroes and Crosses. For this device you will need a DUE board, a 2.8 inch TFT LCD controller or led screen with touch and cables necessary for installation.

As for the assembly, you will have to do it according to the following drawing:

When you finish you will have to enter the Arduino IDE and write these codes: