Basically, computers are computers that have the ability to perform an infinity of operations and for this, they contain many components of support, extension and accessories. Which together manage to execute various tasks very quickly under the control of software.

In this sense, it is known that there is so much input peripherals, as well as those of departure and even some that serve both. So, in this post, we will specifically focus on the output peripherals who are the ones who receive the information processed by a CPU and reproduces it. Taking into account that, there are several types: visual, auditory and tactile.

Regarding hearing output peripherals, we found the speakers, headphones and sound cards. However, highlighting the great story behind the speakers, we will focus our study on them. Taking into consideration what they are, what they are used for, how their evolution has been, what types exist and their most common failures.

What is a computer speaker and what is this hardware for?

Generally speaking, speakers also known as speakers, cornets, or horns, are those devices that facilitate the amplification of sound. In such a way, function as electrical transducers they manage to transform the current of electricity into a soundtrack. Thus, being an electroacoustic transducer, an acoustic screen can be formed with one or more speakers.

Now on the computer, the speakers are defined as a way in which machines make sounds by means of analog or digital audio. Thanks to this, the speaker gives these teams a means of interacting with your users on an auditory level and / or through sound.

For its part, the computer speakers they are used to allow the reproduction of stereo sounds, recorded on two channels. Being this, an optimal feature that makes the listening experience for the user, it turns out much more natural. Well, computers usually have two speakers, each of which can output a different channel.

Regarding its operation and, in summary, we highlight that, within each speaker found a magnet containing a coil and this, is in charge of receiving the electric current. Thus, electricity is concerned with moving the coil and thus, the diaphragm membrane vibrates to generate waves at various frequencies, depending on the intensity of the movement of the coil in question.

Speaker Evolution How have they changed throughout history?

In 1861, Johann Philipp Reis He installed the first electric speaker on his phone. Which, quite simply, was able to reproduce light tones and after some revisions of interest, he was also transmitting muffled speech. In 1876, Alexander Graham Bell it was he who patented his first electric speaker as part of his phone and this one had the ability to reproduce intelligible speech. But later in 1877, an improved version of said speaker was obtained from Ernst Siemens.

So, Thomas edison was able to obtain a British patent for a system using compressed air such as amplification mechanism for your first phonographs. In 1898, when doing some studies, Horace Shot granted an excellent design for a speaker that would be powered by compressed air. However, after a while, sold and transferred rights to Charles Parsons, who obtained several additional British patents around 1910.

Between 1910 and 1920, some companies like Victor Talking Machine Company and Pathé, focused on creating disc players using compressed air speakers. But, due to the poor quality of the sound they emitted and their low capacity to reproduce the sound at low volume, were considered as very completely limited designs.

After more than 150 years of progress and thanks to the combination of all these advances over time, turned out what we know as computer speakers, today. Considering that, currently, the sound of a loudspeaker is transmitted through the double procedure called "Electrical-mechanical-acoustic" and it is divided into two phases: Electric waves are transformed into mechanical energy and this is converted into acoustic frequency waves.

Types of computer speakers How are these hardware classified?

Despite the fact that all the speakers have the main objective the reproduction of sounds by means of an electroacoustic transducer, where the electrical waves are transformed into mechanical energy and then are acoustic frequency waves; certainly, different types of them are distinguished.

Next, we mention the most used:

According to its operation

Around its operation, the speakers are divided into dynamic, electrostatic and piezoelectric:

Nowadays, are the most widespread and they are mainly characterized by the sound they reproduce is generated by the movement of the coil.

Thus, when the sound changes, it is not only due to the materials but also due to its structure:

These too are known as "condenser speakers", are characterized by being expensive, large and their operation is based on three metal plates with opposite electrical charges. Whereas, the central plate of those three It is mobile and usually changes position depending on the magnetism caused by the voltage it receives and thus, it vibrates the diaphragm.

Unlike other types, these speakers they work through the friction of quartz, ceramic or polyester crystals, as usual. Which deform after absorbing an electric current and thus, make the sound. Thanks to this operation and unlike electrostatic speakers, Piezoelectrics are very cheap and of great quality to generate high-pitched sounds. However, they are not as effective at reproducing low frequency bass.

According to your energy source 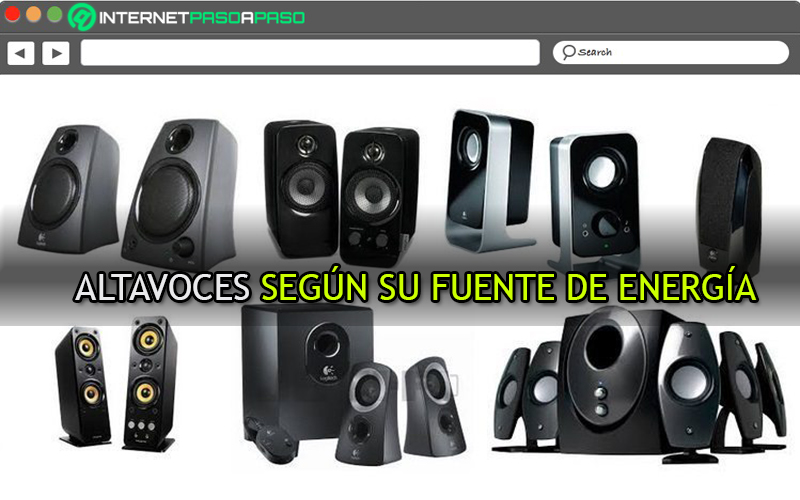 Due to its power source, two types of computer speakers are handled, and then we mention what they are:

According to its frequency 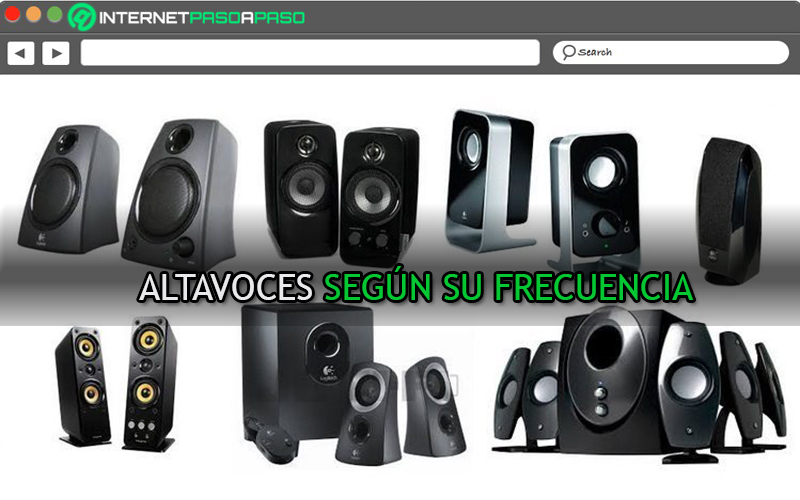 While it is true, the sound in a loudspeaker is classified by frequencies, which are issued from the drivers. But, considering that three main frequency classes are usually valued, various types of drivers are also cataloged, according to each one of them.

Here we name which are:

For their part, dynamic tweeter speakers they have a dome structure and due to this particularity, they are also subdivided into two more types. Thus, those of "Soft dome" who employs textile materials, emits very natural sounds and offers less resistance to waves. Besides the "Rigid dome" which are made with metals or ceramics and it affects sound more intimately.

Commonly, they are those that are in charge of simulating the lowest sounds in the absence of a woofer dedicated. Among its main characteristics, we highlight that have an intermediate size, they find each other cone or dome (depending on the manufacturer) and operates at frequencies of 1,000 or 4,000 Hz.

Specifically, these are the largest and, consequently, it is the heaviest compared to the ones mentioned above. Taking into account that, it is dedicated to deep frequency tones and, therefore, manages to further enrich the sound it reproduces. Usually, surrounds frequencies between 40 and 1,000 Hz.

Traditionally this guy recognized as a bass box and it is the deepest of the entire scale classified according to periodicity, so it moves at frequencies of 20 to 200 Hz.

In addition to this, it should be noted that both active and passive subwoofers can be found:

Common faults and mistakes What are their causes and possible solutions? 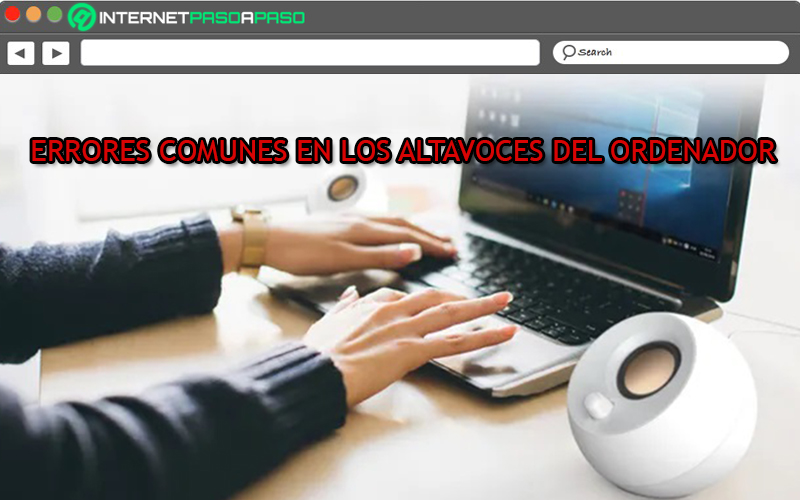 Now at the time of connect and use a speaker on the computer, it is likely that some errors will arise that are truly common.

So, so that you know how to solve them quickly, we invite you to read the following aspects of interest:

Unfortunately, their own updates of the system they can generate some driver failures, so these are uninstalled automatically. In such a case, the first thing to do is check if the audio drivers are reporting any significant errors.

In addition to that, it is advised reinstall the audio drivers on your computer. Which, in the case of Windows, can be carried out directly from the Control Panel and device manager, accessing the section of audio inputs and outputs.

It is also possible that Sound problems are generated when connecting the speaker to the computer. This commonly happens when users mute audio from your PC without realizing it and then they cannot receive any sound through the speakers.

For that, you simply have to right-click the speaker icon in the Windows 10 taskbar and there, you can open the volume mixer. Having done the above, it will be necessary to check that the volume of the speakers is not disabled or in "mute mode". If so, the solution lies in enable and turn up the volume.

Although it may be very obvious, the truth is that it also There may be some faults related to the computer speaker connections. Taking into account that, the principal cause of this corresponds to an incorrect connection or a fault in the cables.

In this case, the corresponding solution will be to check that all the connections of said cables are found correctly and thus, to be able to highlight that the problem is or is not due to a bad connection. Of course, to solve this problem, you will have to make a correct connection and check the hardware operation.

Among other common problems, we found that it is possible that the error is found in the audio formats that have been predetermined in the computer. Since they can cause a tradeoff between the sounds that the speaker connected to PC and in consequence, this will not work.

To solve this problem on a computer with Windows 10, we recommend you access the Control Panel menu. Then, enter the section of Sound and from the "Playback" tab, you will have to enter the properties of the device set as default, in this case, to used speaker.

After that, locate the Advanced Options tab and click on it, to then enter "Default Format" and change the settings adjusting it with respect to those formats accepted by the computer speaker (You need to investigate these data). By last, try again if the device plays audio correctly and otherwise, you will have to modify the settings again, as we explain.