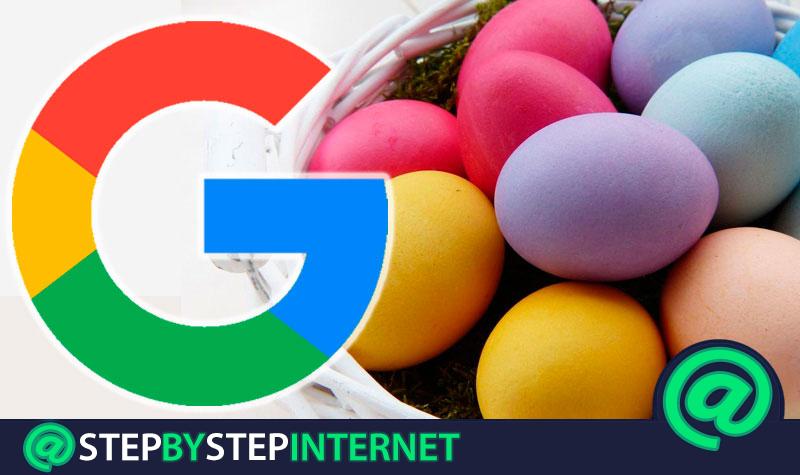 Google developers over the years have earned the reputation of being very creative people, so much so that humorous films have been taken in which this is perfectly reflected.

This is because in Silicon Valley, where this company is located, there is a strong culture of competitiveness and innovation rooted in the minds of all developers, that makes the Great G search engine hide many secrets in your code.

And since not all users are always alert to small details, we in this simple article have prepared a moderate list with a good amount of hidden messages on the giant search platform, Google .

What is a Google easter egg and what can I do with them ?

From the year 1978 the term easter egg became known, not as a traditional Easter holiday meal, but as a reference to a hidden object or event.

These events began first as a little secret, hidden in an Atari video game called Adventure, and from there it spread to many other video games , movies and shows.

An easter egg in computing can be a small code that, as we said, is hidden in a video game, which can include references on the universe of the game or on other topics outside it. In the case of the movies it is known as the famous cameo, of which we have seen a lot in the Marvel movies.

The concept originated thanks to a video game programmer called Warren Robinett, who in his Atari, Adventure, game includes a secret room in which his name appears indicating that he is the creator of the game and the hidden message. Then, in addition to making users stay alert to any hidden message, it makes the journey more enjoyable and entertaining. 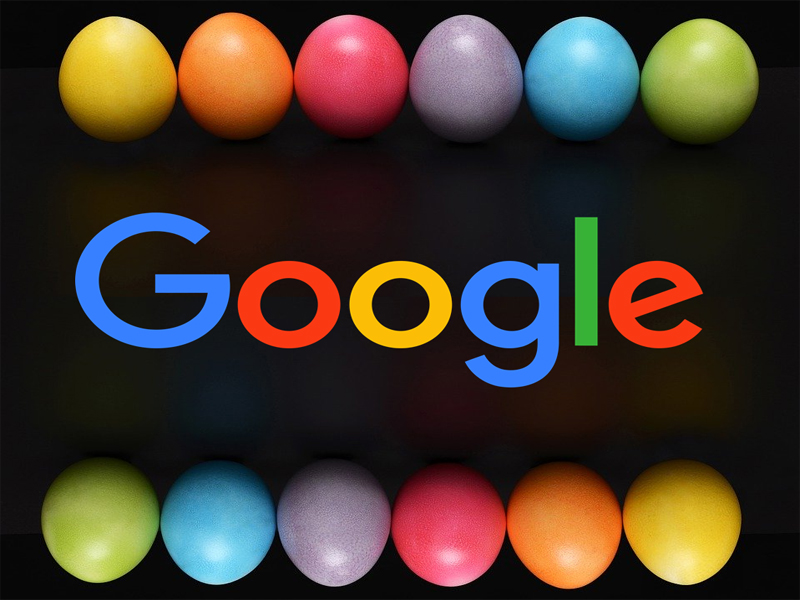 In the case of Google it is the same, only with some differences, since in this computer an easter egg can be:

These usually serve to entertain the user and to keep enthusiasts always alert for more.

Google developers have certainly wanted their platform to be one of the greatest exponents in terms of hidden messages. One of the clearest examples was when they took out the little dinosaur game, that it was not as well known first, but it became popular.

One point you should know as a user is that if any of these eggs are not working on your computer, you may have to close your Chrome email session, or you may have an outdated browser.

Next, let’s get to know some of the best secret messages of the great G search engine:

We open this list with one of the most entertaining animations you can find in this great search engine. In order to see what it is, you must write in the «Thanos» search engine, who is currently the greatest villain presented in the Marvel film universe.

In the Wikipedia box you can see its emblematic infinity gauntlet , and when we click on it, we will see the powerful click effect that takes control of our browser. 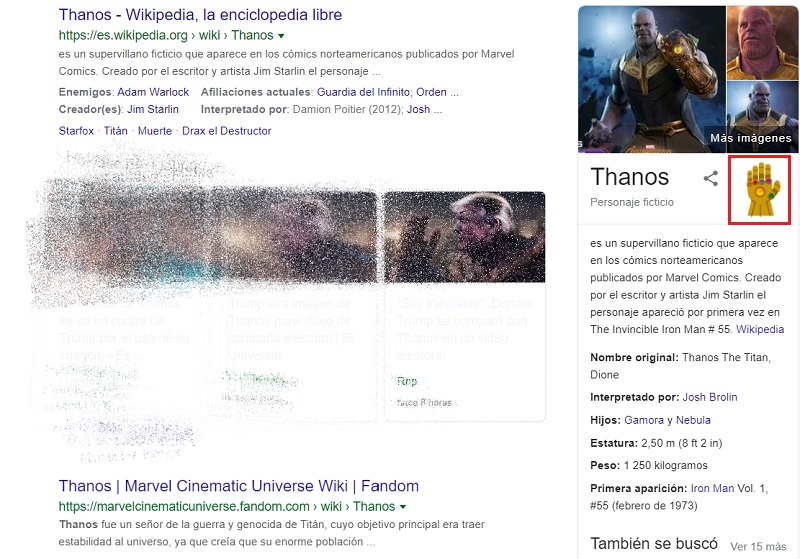 If we click on it again, we will see how through the time gem all goes back the damage caused by the click.

The meaning of life

The meaning of life is undoubtedly a very classic Easter Egg, that every Internet lover should know.

This refers to a saga of 5-volume novels called “The Hitchhiker’s Guide to the Galaxy” , in which the author with his particular humor says that the answer to all questions of the life and the universe is number 42.

So when writing the author’s sentence in English «the answer to life the universe and everything» , all in lowercase, we will get a calculator with the number 42. 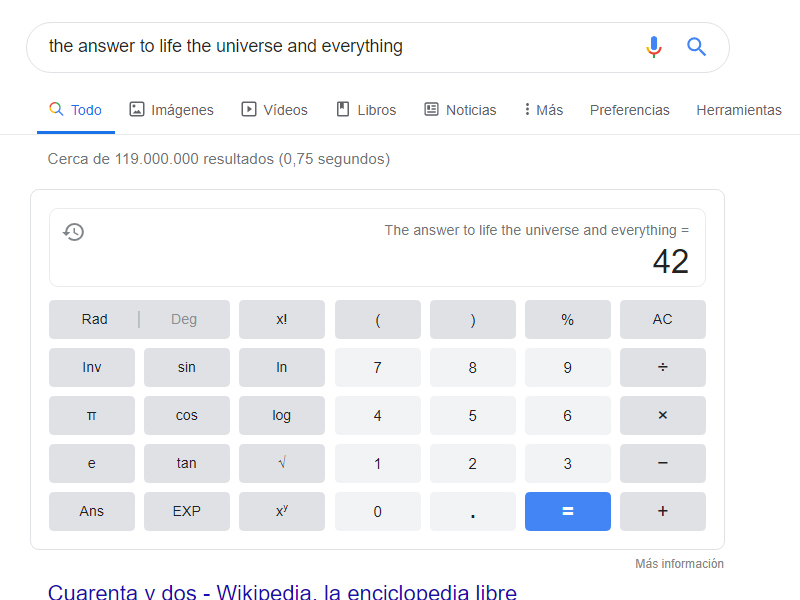 Breakout is a Atari videogame of the last century well known and remembered by fans. That’s why our search engine developers have decided to hide it in their code.

In order to trigger it, you need to type in the search bar “Atari Breakout” and then enter the “Images” section. 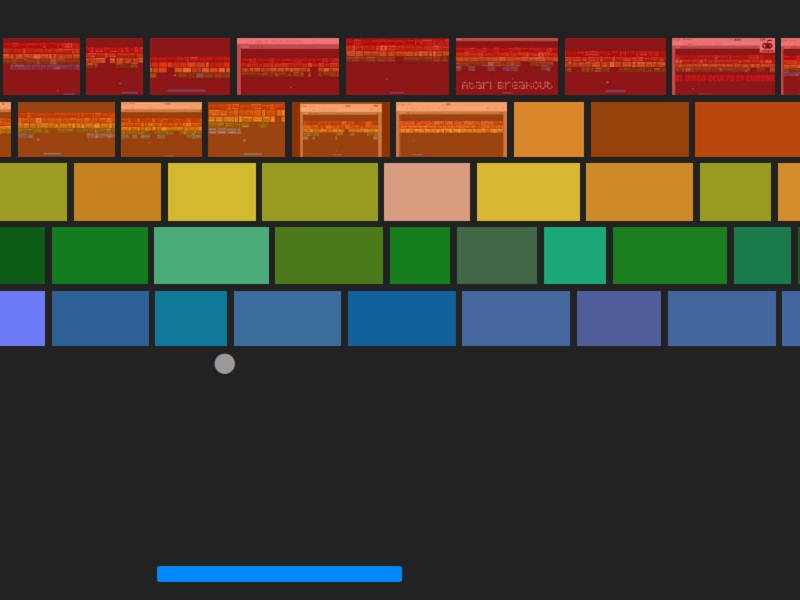 Just by typing the name of this little strategy game in the Google search engine, it will appear in a small green box as the first option. We just have to choose our symbol: “X” or “O” and start placing them in the boxes. 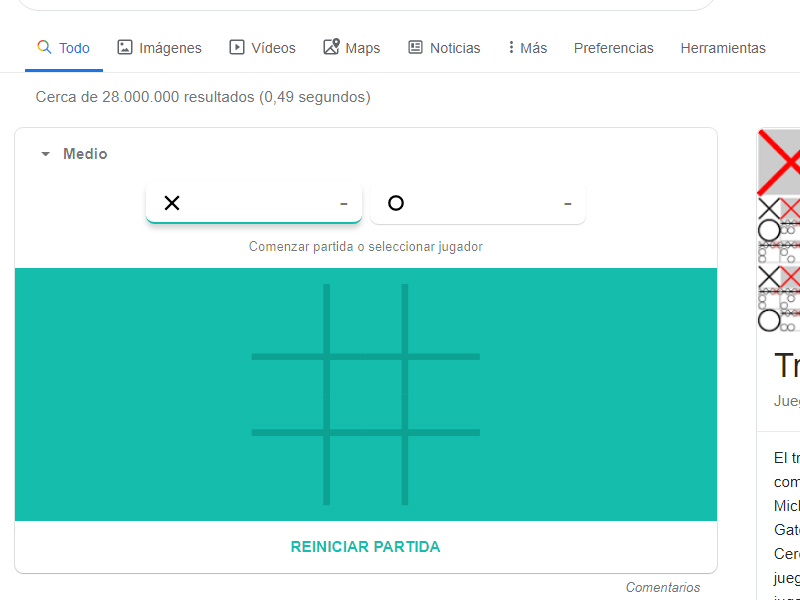 By writing the name of this simple but addictive videogame from the 80s , we can enjoy a modern version of it in the browser. 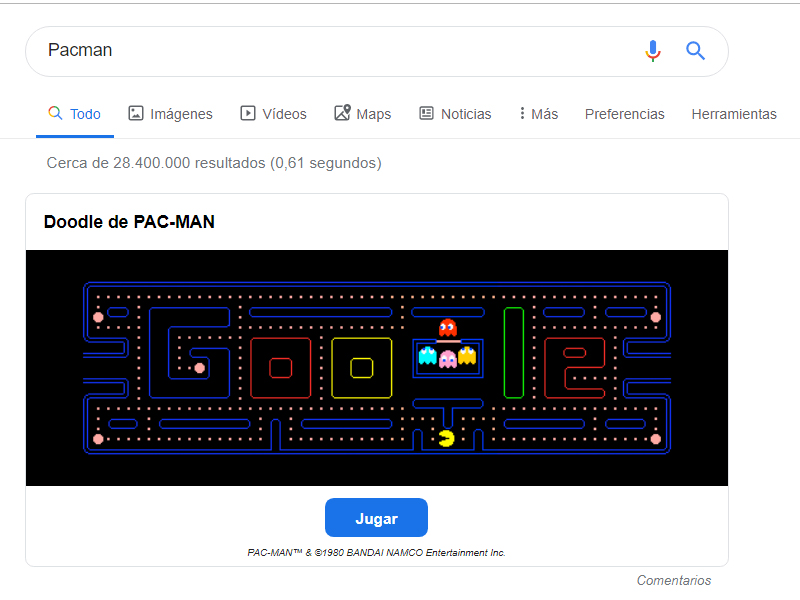 Face or Cross / Face or Seal

When you need to make a quick decision and feel overwhelmed to think about the pros and cons, you can use the old method of “Face or Cross” or “Face or Seal.” 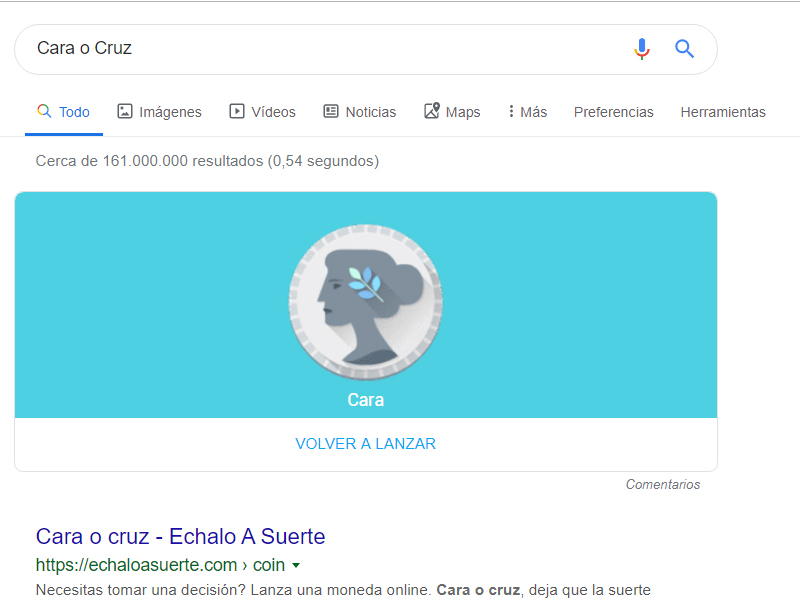 When writing the name of this ancient game of chance of Hebrew origin, we will get a small picture, in the we can try our luck. This is a simple game that resembles the European whirligig game of chance. 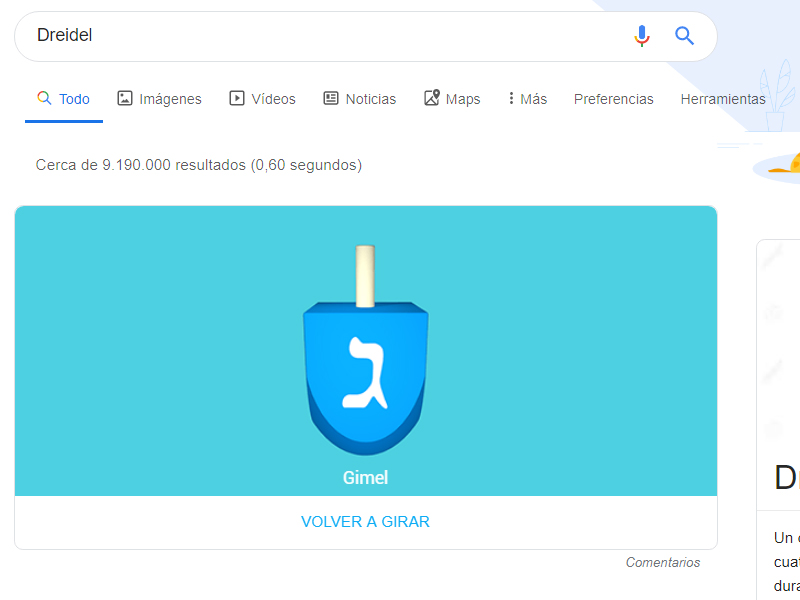 When you want to have a quiet time and develop your patience, you can type in the «Solitaire» search engine to start enjoying this simple card game. 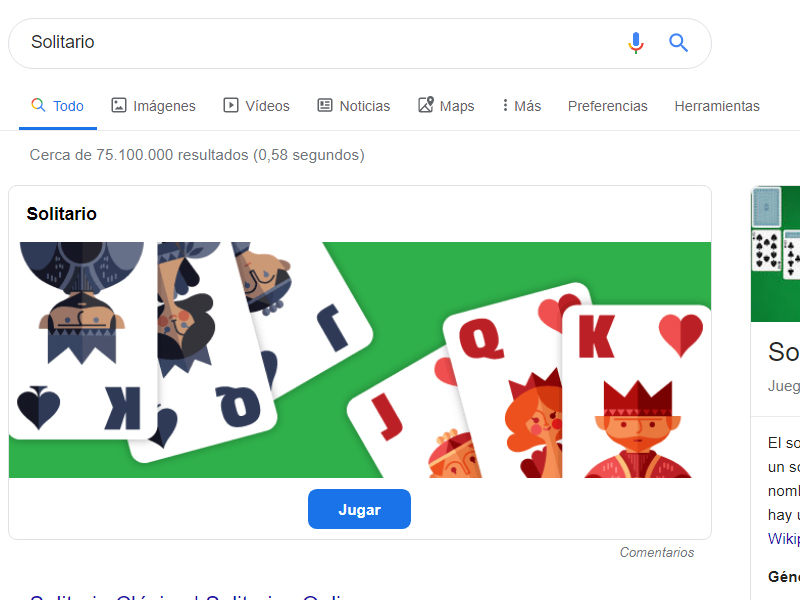 The most famous arcade video game of the 80s, if you type your name in the search bar you will notice a blinking box, in the information box on the right. If you click there you will find a small animation that will bring you many memories. 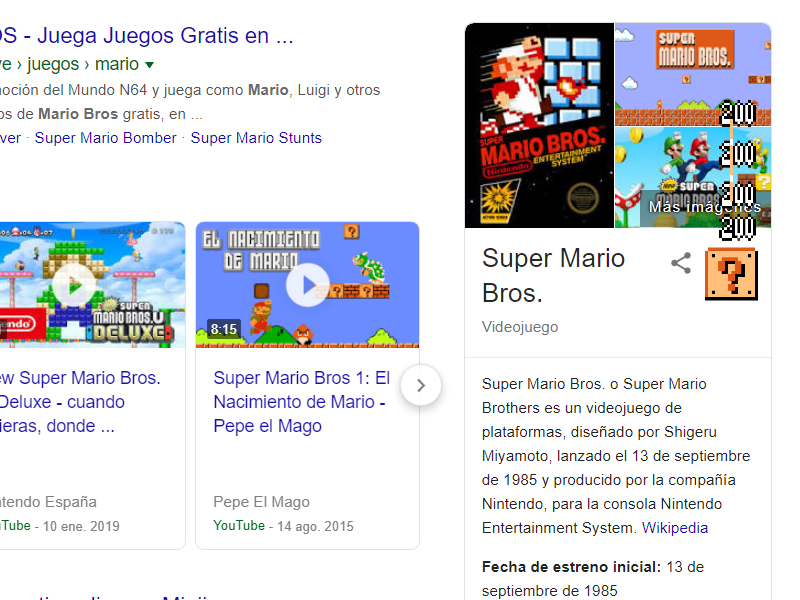 This simple tool allows the user to take the time of a musical composition. In this case you go from 40 to 218 beats per minute «PPM».

Just write the word «Metronome» in the search bar and calibrate it to the appropriate time, finally click on «Play».

This is a fun Easter Egg, in which the user can interact with all the search elements of the homepage. To activate it you must type Google Gravity in the search bar and select the first option that appears. 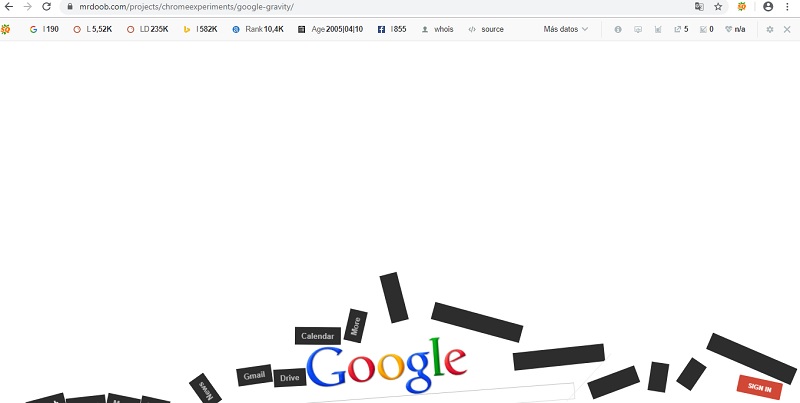 This is an insolent Easter egg, where the algorithm makes a little fun of its users. For those who do not know an anagram is a mixture or rearrangement of the letters of a word to form a completely different one.

Something curious is that when we look for the word Anagram in the corrections section we will get «Maybe you meant: frog range». But, if you click there it will take you to a totally different result than the one of the mentioned word. 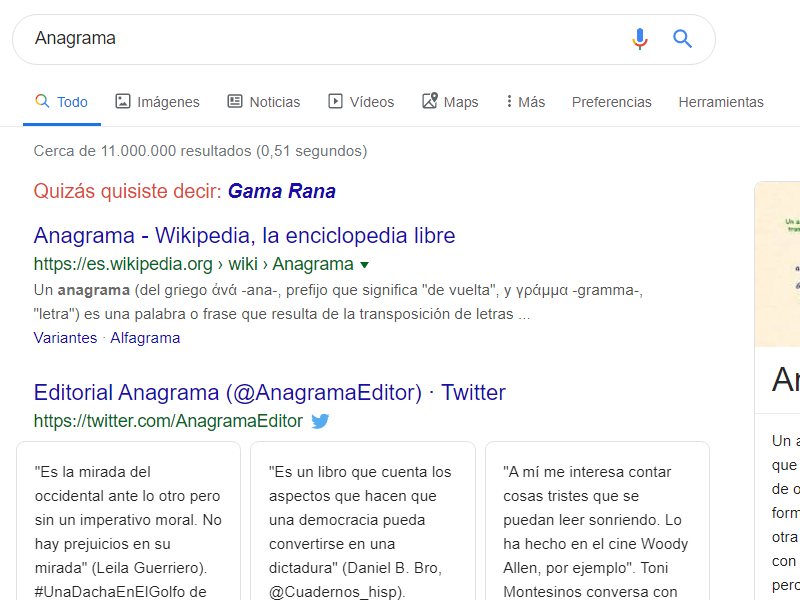 The same happens when you write the phrase “Define anagram”, the algorithm makes us the following suggestion: “Perhaps you meant: burst amendment”. 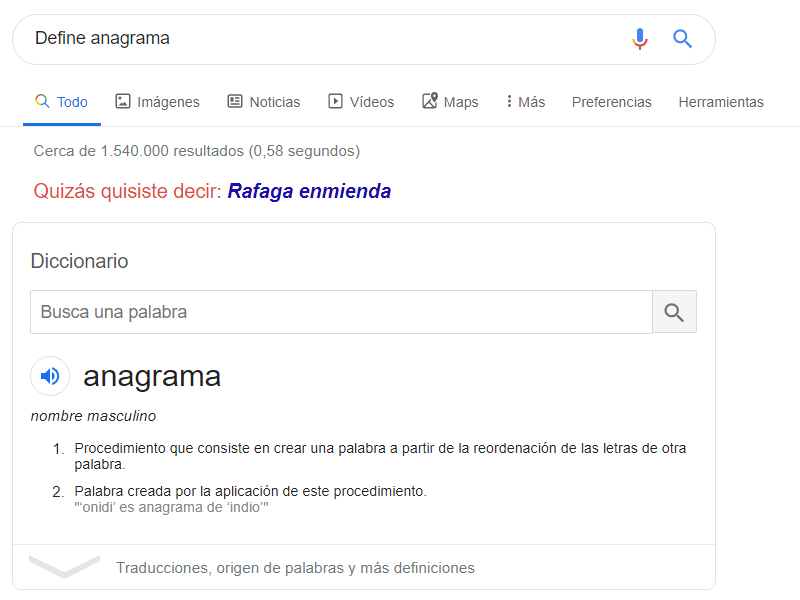 By typing “Google in 1998” in the search bar, we can enter the first option where we will see nothing more and nothing less than the Google beta version of that year. Even will seem to be using the obsolete Internet Explorer. 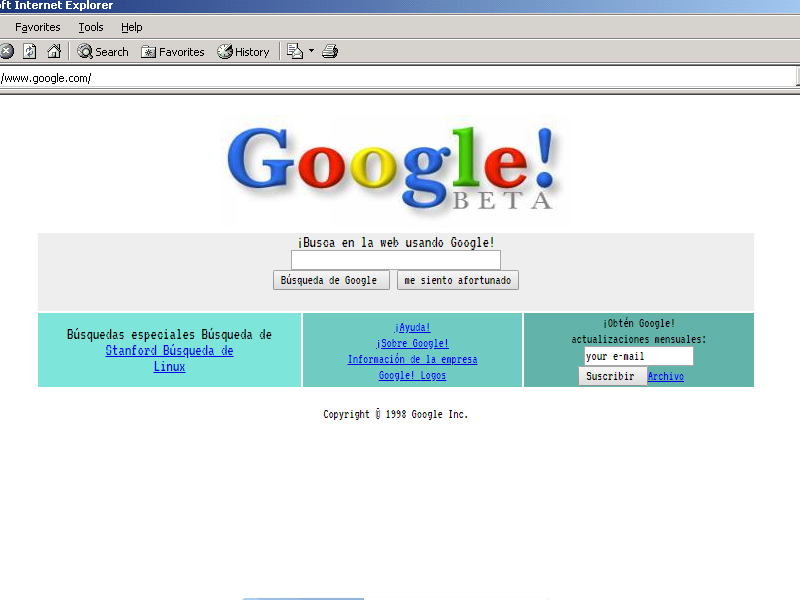 When the Internet was a novelty and the web pages did not have as many functions as now, there was a small code used in HTML that the developers used to highlight the searched words. If you write “Blink HTML” in this you will see this simple visual effect.

This is another of the simple visual effects that page developers used in the early years of the Internet. If you type “Mark HTML” in the search bar you can enjoy scrolling the total results section.