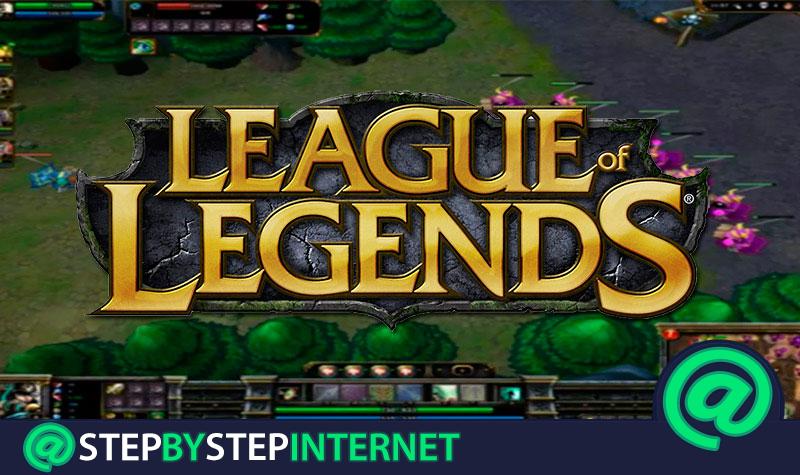 Developed by Riot Games, now owned by Asian giant Tencent Holdings Limited, League of Legends is one of the biggest milestones in the video game industry . This title, belonging to the genre MOBA , moves a legion of players that does not stop growing every year that passes to the point of having become one of the games with the highest number of users in any type of current platform.

Also known as Lol , this is an online multiplayer proposal in which several teams of players compete with each other. Simple, fun and with a set of mechanisms that reward the practice and knowledge of both characters and other elements, its fame has catapulted it to such an extent that it is considered one of the precursors of the phenomenon of e- Sports .

Therefore, and for those who want to start in it, we will explain how to create an account in Lol, or rather, how to open an account in League of Legends . You can also join this mass phenomenon capable of filling stadiums like any other sport or event of great caliber, as well as to verify why it has achieved that reputation attributed to it. Its original release took place in October 2009 , but since then, it has only grown in both content and community .

How to register a new account in League of Legends?

And best of all, what it offers is completely free . To play League of Legends you don’t have to pay a cent, since you can download it, run it on your computer and start enjoying the games it offers. The only items that require payments are some characters, which can also be obtained for free by accumulating game currency. In short, in addition to wide and fun, it does not make you go through the box if you do not want.

As we have just said, to register a new account in Lol you do not have to pay absolutely anything , the registration process is far from complicated and the typical step of paying to be able to perform is ignored Download it or install the program on your PC. It should also be noted that is only possible to play League of Legends if you have a Windows or Mac OS X operating system , since they are the only ones with native support for the Riot Games game. The registration procedure, as you will see below, is simple to rage:

The first step is extremely simple. Open your preferred web browser and enter the official Lol portal , which will depend on your territory (https://play.euw.leagueoflegends.com in the case of Europe).

If you have problems, you can search “League of Legends” on Google and you will see how, in the first, results, the address to enter or access directly from here appears. and choose your zone and language from the drop-down menu in the upper left.

Once on the official videogame website, you will see a message in the center with the text “ Join League of Legends. Become a legend ”. Below it is a button (“ FREE PLAY ”) that allows direct access to the registration form. Click to enter it and start creating your user account .

3 – Fill in the registration form

This step is still quite simple. You just have to fill in the indicated fields with truthful data so that the Riot Games team can verify your identity . It is very important that the email is a real one, to which you can have access, to receive notifications and confirm your account, in addition to using a unique username and a personal and non-transferable password.

In the region section , although it is usually automatic detection, it is vital to indicate the appropriate territory so that the games work properly and there are no connection problems, in addition to making sure that the language is yours . On the other hand, it is also important to accept the terms of use and the privacy policy . Otherwise, you will not be able to proceed with the registration.

With an account already created, the last step is to download the League of Legends client to start playing . Once you have finished the registration, the game website sends you directly to the download option so you can start doing it. At the time it was downloaded, the next step is to start the software that will install the necessary data on your computer and, in addition, will look for recent updates to have the most current version.

As we have commented, when making the registration process in Lol, we will ask for an email address , this must be real and with access from you, since when completing the previous steps, you He will send us an email welcoming us and asking us to confirm our email address by clicking on the link they provide us , a detail to keep in mind is that sometimes these emails arrive at us at Spam folder and may go unnoticed and therefore not complete the registration process, so don’t forget to check it!

This has already completed the process of account registration, downloading and installing Lol . Always remember that it is a free procedure and that, in case some type of payment is required somewhere in this procedure, you should stop proceeding since its legality is doubtful.

On the other hand, Linux users can also perform all these steps and even play League of Legends . However, since it has not been developed to offer native support, the penguin operating system has to resort to emulating the Windows environment to make the game work , which provides a decrease in the performance and can tarnish the gaming experience.

Problems with the “smurf” accounts What are they?

The phenomenon of “smurf” accounts is something that has been accentuated in recent years with this popular game . This term, which in Spanish would be translated as “ smurf ” accounts, is used to talk about those accounts that are generated to start games with low-level users or little experience in the game.

As a general rule, they are created as secondary accounts to start over or to play with friends without pairing problems. League of Legends has a system of levels that, depending on the experience, the victories and the total number of games played, match their players according to their abilities. And this can be a big problem when smurf accounts come into play .

The main inconvenience that is generated is the loss of balance or too much unevenness between users. If in a game they are all rookie players and enter one or two with accounts of this type, their level is much higher than that of the rest, even though in that account it is not visible to the naked eye. His mastery and knowledge of the game makes the balance completely unbalanced, spoiling the experience to the rest .

However, this is just the tip of the iceberg, the other task of the League of Legends smurf accounts is to do business . Professional players have dedicated themselves to charging money to others to level up these accounts, with the consequent negative impact for both the community and themselves. At present, there are countries in which this movement is punishable by economic fines and community services , making the penalties much worse in case of acquiring accounts registered to another name for phishing what this means.

It is true that it can also be something positive , especially in the competitive field. The most professional, who register them in their name and with total legality, usually use them to experiment with other characters and perform all kinds of tactics without the community knowing that they really are, thanks to the anonymity of using a nickname in the game . Thanks to this, can surprise in the highest competitions and break all the schemes of the rival teams .

Even so, when this barrier is crossed and a business of raising levels in accounts begins to arise (what is known as “ Elo Boost ”) is when the real problems begin. Both Riot Games and its owner, Tencent, fight hard against it and, as we said before, in certain countries there have already been cases of legal sentences that have been harshly charged against those who carried out this bad practice , especially in South Korea, cradle of e-Sports.

Generally, punishments that restrict access to the game are usually applied. The most scandalous case in this matter had as main implication one of Riot’s founders, Marc Merrill , and the member of a professional team in 2012. Graphic tests and testimonies corroborated the accusations of having made this illegal practice both inside and outside the game, leading co-founder Merrill to donate $ 10,000 to a Californian organization for charitable purposes as a fine.