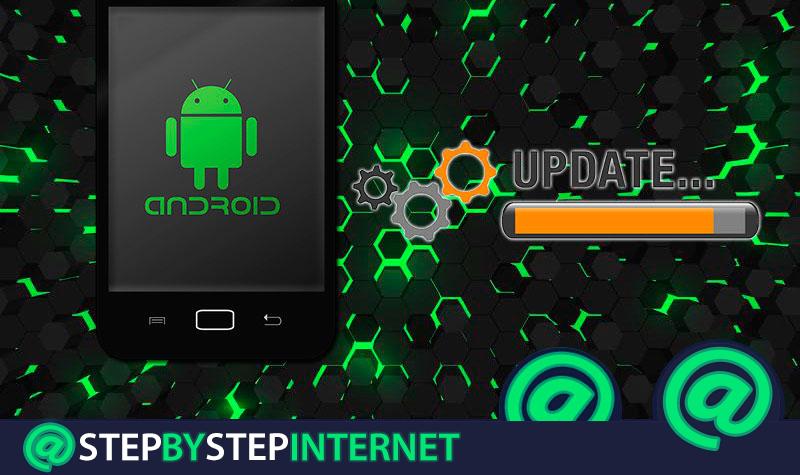 is a very widespread operating system in recent times and that is based on Linux . Initially, he worked for mobile phones or tablets with a touch screen , supporting Google for all his creations. Phones based on this technology are counted by hundreds of millions, which makes it totally common that at this time you are looking for how to update Android to the latest free version .

, although there is also the possibility of being able to download softwares externally written in Java programming language . This ensures that it is not an operating system with a risk of containing malware and that these external applications are as suitable for your cell phone as you find in the Google Store.

According to studies, it is shown that, compared to the iOS platform, Android is a less vulnerable system in terms of security. This data is affirmed on the basis that 13 serious vulnerabilities for Android have been found for 387 for iOS , although, of course, both systems continually strive to be safer in their official markets.

was an operating system designed to use with keyboard and cursor to navigate between applications. Today it is much more customizable, so that it has now become tactile and can thus compete more easily with the iPhone. All the applications you are looking for for the system are in its version in APK , although you can also use Google Play to download other similar apps.

has multiple different systems for each type of device, it is true that they have created a way to make the updates quite simple . Throughout this article we will explain what that means of “ update your Android mobile or tablet to the latest version ” and how it should be done. We will explain the official way and other alternative methods .

Official update without the rooted cell

This section is where we will introduce the concept « OTA «, which is a software update made wirelessly; that is, without any cable connection. This is the easiest method that can be used to perform the update . Through OTA, the firmware is downloaded and installed using a wireless connection so that the tablet or cell phone does not have to be connected to the computer.

I begin by explaining the manual option without having the mobile rooted . What you have to do is simply check if there is a new update for the system.

This process is carried out in a similar way in the different types of mobiles, but as more steps must be followed, you have to pay close attention in each section.

. These methods are not official , but they may be equally valid. Don’t forget to make a backup of your data before starting the process; You won’t want to find unexpected surprises once you have your cell phone updated. There are several ways to improve the operating system of devices from all brands.

You can get the latest Android update

Simply with an SD memory card, let’s see what are the steps to follow:

for almost all devices. Let’s see the steps to follow to perform it successfully:

Using the computer or PC

To be able to install using this method you need to have the Android SDK installed and the terminal drivers or drivers (this will vary by brand and model). Remember also that it is very important that you make a backup of all the data you have on your phone to prevent them from being lost. This includes photos, videos, audios and any type of file.

If you have a device of the Samsung brand you will have several ways to update your version of Android . The easiest would be to do it according to the OTA method that we have explained in the first section of the publication. But there is also the possibility of doing this through a KingRoot, applications or with an SD .
Although the easiest and fastest way could be to do it from the computer, let’s see it:

The most recommended way to perform this type of update is through the official support that gives us the OTA route . It can also be done through KingRoot and other applications and SD. Of course the other safer option is do it from PC .

If you have a LG brand device this is the section you should consult. In order to upgrade your cell phone or tablet to a higher version of OS you can use the steps explained in the first point about the OTA route . You can also update LG smartphones through KingRoot, an SD card or certain applications.

If you want to make a secure update using your own computer , you must download the program that corresponds to you according to the operating system you have:

If the device you want to use is of the HTC brand you can do the update of Android using the most direct way that is the via OTA >. Another very direct way is using your own computer, although for this you have to download a specific program called “ HTC Sync Manager ”, which serves both Windows and MAC and that It allows you to do the update. If neither of these two options convinces you, you can use other ways of downloading explained in previous sections.

I imagine that you have located this section because you have a Xiaomi brand mobile phone and want to update it to its latest version of Android . Well, do not despair because it is something very simple. In addition, you can use any of the options I present below.

Personally, in my view, I think it is best to update using the OTA or the computer . The steps to do this are detailed in the first section of the article. All you have to do before carrying out this update is download the software “My PC Suite” . Surely you already have it because it also serves to manage the files on your device and Xiaomo invites you to download it when you open your account with them.

Do not forget that you also must have backed up your information and terminal data to prevent them from being lost. If you prefer to use an alternative method you can use an SD card or King Root, which are other ways that we also comment throughout the post.

Do you have a Lenovo mobile or tablet? Well, it’s time you learn how you can upgrade to the latest version of Android . It is very simple because you have many methods to do it: through applications, from a computer or PC, via OTA, KingRoot or an SD card; All methods are for Lenovo phones and tablets .

If you use the update method with the help of your computer or PC you must download an application that is only enabled for computers with Windows operating system . If you have a MAC computer, you cannot use this update method. This simple software is called « Lenovo MOTO Smart Assistant «.

Now it’s the turn of the users of Motorola-branded mobile phones . For them the update system is the same because they have the means indicated above.

If you are looking for the security of using an official means, it is best to perform the update using the service via OTA . But what is recommended from our website is to use the update using a computer using the “ Motorola Device Manager ” program, which is available for both Mac and Windows . You can also use the other options such as the update via KingRoot or SD card.

Finally, but not least, we have users of devices of the Alcatel brand . These can be updated using an SD card, KingRoot or exclusive applications .

They will also be able to do it through the via OTA, which is perhaps the most intuitive. But from the web it seems that the simplest is to use the necessary application and do it from a computer. If the decision is to use this medium, you must download the specific application for Alcatel devices .

Best Roms to have the latest Android update

, as discussed above, is a Free operating system with open source code, so anyone can download it and work on it to suit their needs. Each of those versions created is called ROM or fork . These versions would be available to download and install on other devices. Next, we talk about the most popular different versions in case you are interested in trying them. If you want to know how to update your mobile phone ROM click here.

This is the most popular Android ROM . In addition, it has a large community behind it to guarantee the power of this system. It has been fortunate to be supported by some manufacturers to install it by default on their devices. Their goal, according to the creators themselves, is to free Android.

Many people think that it is the most complete ROM that Android has , although it has been less years in the market. But perhaps its fundamental characteristic is that it has focused on improving the small details of the system. It has developed three user interfaces between which you can change and a mode that allows you to take advantage of all the screen space by hiding the system bars.

It is an alternative system to CyanogenMod , but without worrying about aesthetic improvements . It carries some extra functionality such as launching apps from the date and time buttons, notification counter in the status bar and a quick menu to launch applications from any of the desktops.

It’s a reduced version of Android so it can take up as little space as possible. Lets you choose the Google Play Services elements that we want to be located in the terminal. It has support for fifty devices.

This is one of the most interesting of all existing ROMs . It is compatible with a large number of devices and includes many features relevant to customization. It allows you to modify the colors and the way in which the notifications flash. You can edit the permissions of the applications they contain inside as well as the processor performance.

This is a very good option to to have several ROMS is the same device . So you can use the features that you think are best for each of the ROMS that we have been talking about throughout the post. PAC-MAN ROM still needs to become more popular among Android devices, but has the best features of CyanogenMod, AOKP and Paranoid Android . In this case, add options for games that can be installed on the device.

If you are waiting for the update to arrive, you do not have it yet and you do not want or can not do the update as we have said before, there is still another option. Follow the steps below:

As you can see, there are multiple ways to update Android to the latest version ; you just have to look for the option that best suits your tastes, needs and device where you want to perform this update.