Smart TVs or Smart TVs have displaced the position that traditional televisions had in our homes, leaving them behind to take the place of the most used device in the home.

Due to all its functions, this painting not only represents the new way of watching television, since Smart TV have also been conceived with the idea of simplify tasks in a single computer that you could previously only do on a computer or Smartphone.

According to the applications you use, you can get the most out of your smart TV. That is why in this case we are going to reveal to you how you can use Skype on your Smart TV to communicate through this big screen.

Nowadays Skype is par excellence one of the most popular applications in the world to make video calls, either from your Smartphone, computer, laptop or Tablet, all this as long as you have Internet access. Although you think that this is only limited to the mentioned equipment, the truth is that Smart TVs also have the ability to connect to the network, which makes it possible for you to download any app in the Google Play Store to make video calls.

In relation to Skype despite its popularity to make video calls from the computer or mobile device unfortunately it did not have the same results on Smart TVs, for this reason, Microsoft announced that it would not continue to update the tool for this type of equipment. Since June 2016 the provider of this service refused to continue supporting Skype for Smart TV.

In his statement he stated that this measure would affect the management of new accounts and resetting of password or passwords, being possible only by Skype. Although this decision by Microsoft is due to the little user demand on this platform, Because in their opinion they prefer to use the app from other laptops, there are still people like you who are looking for information to integrate into this form of communication from their Smart TV.

Today there are video communication platforms, programs and applications that you can also use from your Smart TV. As I mentioned before, Skype for now can be downloaded and installed on laptops, computers and smartphones. But there are other alternatives so that in the same way you can use the screen of your smart TV in a video call and appreciate the image in the dimensions it offers you.

You can achieve this action using your Smartphone by doubling the signal of your mobile device on your smart TV, we explain how below:

This device serves for wireless audio and video transmissions. To do this, you must verify that your Smart TV is compatible with this protocol to use the option to the maximum “Share screen” that will allow you to project video and audio from your iPhone, Mac or iPad to your AirPlay compatible Smart TV, for example: Vizio, Sony, LG and Samsung.

If your TV supports Chromecast you must install the Replica app. To begin, you must open it on your iPhone so that it detects compatible devices and you can duplicate the content of your device on it. In the case of video calls, For people who have Android phones there is no difficulty because it is compatible.

Follow this step by step to share the video call from your phone to the TV using the Skype App or any other platform.

To better understand the process of video calls from your mobile (iOS / Android) to the TV using Google Chromecast, the first thing you should do is: 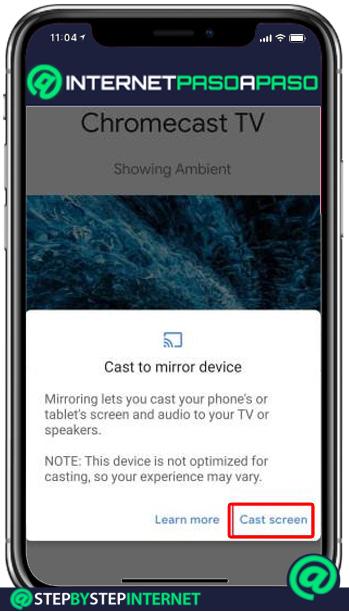 In the store of the device you use you can choose the best rated applications to make video calls, in case you cannot download them directly to your Smart tv, here we already explain how you can use them from your smartphone. Before it should be noted that some of the latest TV models may be able to receive videos and audio wirelessly. Anyway, if you want to know if your TV is compatible with the Chromecast protocol, use the Xcast App.

This tool has gained fame since the pandemic and is considered one of the best media for real-time video conferencing, although it is not available in a TV version, you can share from ApowerMirror from your mobile to Smart TV.

It’s not just messaging, the app was updated and now also has the function of video calls. Notably You do not yet have the ability to make group calls.

In most countries WhatsApp is being used to make video calls, so as we have explained to you throughout this article you can use it from your mobile and replicate the transmission on your television.

You can do this without using an external tool. On your TV you can watch video calls on Skype, Messenger or WhatsApp without any problem. It should be noted that this is not a wireless option, Since to use it you must connect the cable of your mobile to the port of your Smart TV.