Watching TV online is one of the best things for all fans of television, and what better way to enjoy it from the Internet. All this has been achieved thanks to the technological advances that have made this kind of thing possible.

In such a way, that being able to enjoy your official stations, channels or websites to be able to watch television has become one of the best things for users, where they can have extra entertainment just one click.

While it is important to mention that there are many channels today that are paid. However, we can also find free online TV services and which offer you music, novels, movies, games content, among others.

List of the best channels, stations and official websites to watch TV online

It should be noted that there are currently many people who, for reasons of time, do not usually spend time watching television, but rather, the little free time they have use it using Internet , either to find information, check your social networks , or just to watch TV from there.

This being the main reason why most television networks have decided to implement their platforms on the network, where they offer certain programs for paid subscriptions such as FOX and HBO.

Therefore, if you are looking for how to start watching free or paid online TV with HD content to be able to watch your favorite series, novels and games, you can do it in a very easy way and fast, that is why here we present the main channels, stations and official websites of Spain so you can start watching your TV online. To see the full list of websites to watch free internet television click here. 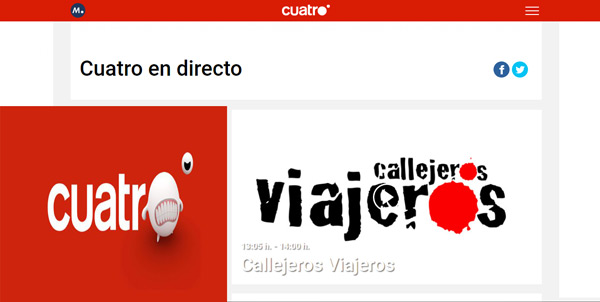 It is now possible to start enjoying all the programming of Four through Internet online. Please note that it does not matter if you are outside of Spain, therefore, leaving will no longer be a problem so you don’t miss any of your favorite shows. A platform that has great programming and a à la carte menu for all its users.

On its platform you can find all the great successes of the television, including the great triumph of the season: “The pillars of the Earth”, as well as the revelation series worldwide “Ken Follet’s best seller adaptation” which broke sales record.

We will also find the most famous television programs such as the “Big Brother or the anthill”, “House” and “Frank de la Jungla”, everything this and much more can be achieved in Four online. 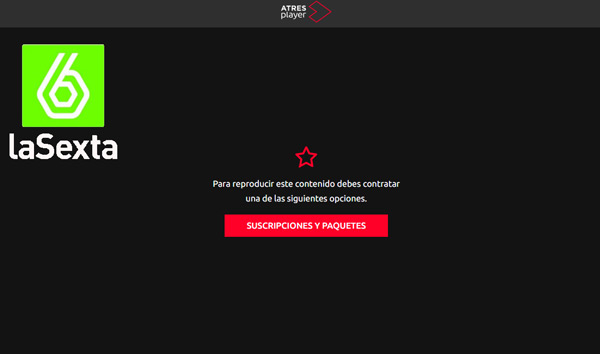 The Sixth Streaming already gives you the opportunity to start enjoying all its live content on the Internet, there you can start watching all your favorite shows at the time you make yourself decide, keep in mind that through this online platform you can see all the content of the Sixth, where you will also find a a la carte menu.

In this television network you will find humor programs, American series, sports broadcasts, entertaining, series and movies, among others. La Sexta has become one of the most prominent television networks in Spain in recent years, especially for having broadcasts of Formula 1, series like “The Mentalist ”,“ Bones. ” Without a doubt, a very good option to be able to spend some fun while browsing the Internet.

Go to the Sixth Live 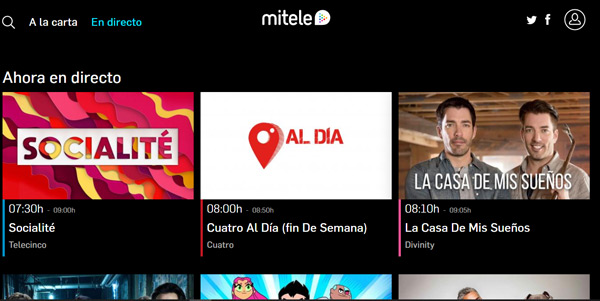 Another of the television networks that have made the decision to share their content live over the Internet. Mitele is currently one of the channels with the most varied content for all its audience, where it has sports programs, entertainment, the most successful series in the United States, among many other programs . Without a doubt, Mitele is an online channel for all tastes.

You will also find programs from the Mediaset chain, such as Telecinco, la Siete, Divinity and Energy, also has the best Spanish and foreign series, programs for the smallest of the house, thus offering a large number of featured programs and original content so that its users can spend a very entertaining and warm time.

Mega TV is another of the television networks in Spain that has been passed to the world of the Internet and through this platform you can start to follow all its programming live at any time you want. This channel of Mega TV belongs to Atresmedia Corporación.

Here you will find very good quality programming and the best in all of Spain, where you can enjoy programs such as “ Crazy cars” “. “ Ghost Seekers “, “ Police in action “, “ Dangerous of the world “, “ Formula 1 ” , “ Ghostbusters ” among others. However, it should be noted that all this programming is only available for Spain.

If you have been looking for a place to watch all your favorite series and at the moment, then Mitele Series is your favorite option, here you can watch all the episodes of the most popular and sought-after series of the moment, you can also follow the series broadcast by other television networks such as Telecinco, la Siete, Cuatro, and others.

Here you will find both Spanish and foreign series, which you can access at any time and at any time. It should be noted that this web platform is available worldwide, so being away from home will not be a problem in order to be aware of all your favorite series.

With Telecinco you will find a perfect place to start watching your favorite shows from both series and movies online. In addition, you have an à la carte menu for that you can watch all your favorite shows in an easy and fast way. Simply by entering the official Telecinco portal you can start enjoying totally new content.

Telecinco offers you a great broadcast of national series and productions, where it has hits like “Felipe and Letizia, duty and love”, “Angel or demons”, “Aida”, among many other high quality content that you can enjoy from the online Telecinco platform.

This television network already has a online platform for several years ago, where its users can already see all the programming of the 13 TV signal live, a channel belonging to the majority shareholder of the Spanish Episcopal Conference .

It was born with the aim of offering people a wide variety of programs that foster the values ​​of Catholic churches . In such a way, that through 13TV you will be able to see Masses live, classic movies and own production and meeting programs .

Among its most popular programs and with more audience we find “El Cascabel”, where it is a debate about the political situation that Spain is going through, you will also find programs like “The missionaries for the world. ” Without a doubt, a very good option to be able to watch religious programs and promote a little more the Catholic religion in Spain and the world.

Pluto Tv is an online platform that basically works as a television antenna that will allow you to enjoy US channels live and that you can also access it for free. On this website you will find channels such as CNBC, Fox Sports, CBSN, Bloomberg, IGN, Nasa TV, THC, Food TV, Cracked, among others.

The best thing about using Pluto Tv is that you don’t need to create a record to be able to enjoy its services, simply by entering the official site you can start enjoying all its content. Among its main advantages we find that it has applications available for Android and iOS mobile devices, as well as for Amazon Fire TV, Xbox, Android TV, PlayStation and Apple TV .

How to watch TV online from an Android or iPhone mobile phone? Best apps

If what you want is to visualize all the television content from the comfort of the sofa directly from your Android or iPhone device, watch out, because here you go the most outstanding applications to do it.

This Spanish channel is currently operated by Atresmedia, and is one of the most popular in the country. It has excellent programming that has led it to be located among the leading channels of all Spain , constantly presenting original and national programming. In addition, you will have productions of entertainment, entertainment, news , among others.

Due to all the success achieved in Spain, Antena 3 has an online platform which will allow you to enjoy its content at all times through an Internet connection and which has a mobile application for both Android and iPhone and which you can download for free to your terminal. In the case that you are a user subscribed to this channel you can enjoy channels like Mega, the Sixth, Nova or Neox .

RTVE or La Corporación de Radio y Televisión Española SA, is a company that will indirectly organize the public service management of television and radio throughout the Spanish territory. It was founded in 2010, and is financed from the general budgets of the State , along with all taxes of telephone companies within the Spanish territory.

This Spanish television is one of the best known and one of the most active viewers, she is grouped into two general channels and three themes. In addition, it has mobile applications for Android mobile devices and iOS , which allows its users to be aware of all their transmissions at any time and moment.

This Spanish television channel is from an open system and which can be used over the Internet worldwide, belongs to the Atresmedia Corporation and was created in the year 2005. In Nova you can get a lot of programming of all kinds and very attractive, ideal for those who like to have a good time behind a TV screen.

However, it should be noted that the majority of Nova programming is directed to the female audience , where you can find a large number of cooking, decoration programs , fashion, beauty shows, novels , among others. But, this does not mean that there are no programs for the male audience , you can also find action series, sports, among others.

Nova you can download it for both the Android operating system and iOS for free. This will allow you to see each of its contents at all times through an Internet connection.