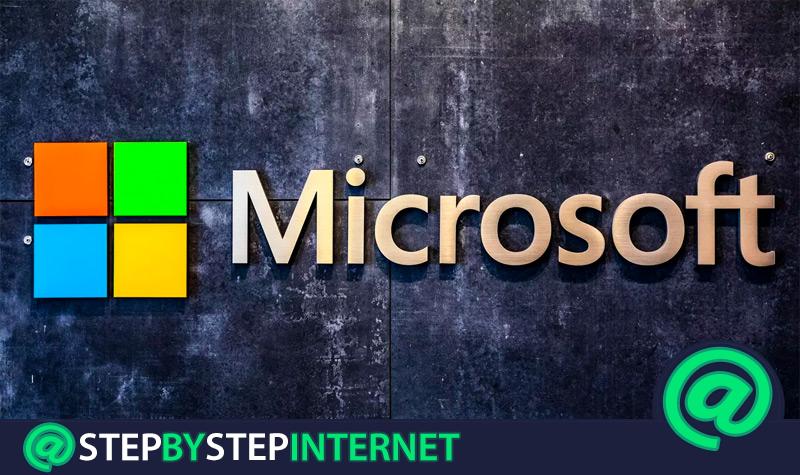 Microsoft Corporation is an American company that appeared in Washington dedicated entirely to the technological area . It has been one of the industry’s highest-earning companies in history, leading the market for many years. Surely we have all used a tool devised by them, highlighting the well-known Windows operating system but noting that there are dozens of products of the company.

The beginnings of this software company are one of the best known, it  was created in 1975 by Bill Gates and Paul Allen in a garage in the United States. Its best known development is the Windows operating system, whose current version is number 10. It is based on multiple users, with a window-based graphical interface and quite simple to use.

In addition to  Office , today you can find Microsoft products such as the Edge browser  , the Visual Studio graphical editor  , the Outlook mail service   and the  SQL Server database manager . It is one of the most important technology companies that exists today and its main founder Bill Gates is one of the most famous billionaire philanthropists in the world.

What is Microsoft Corporation? Origin and history

Microsoft Corporation , as we have said before, is a technology company. Its name is obtained by reducing the terms ” microcomputer ” and ” software “; that is, it calls itself something like software for small computers.

It has a large number of elements to its credit, but the most notable are the Windows operating system, which is the most used in the home environment . the Office suite, the Internet Explorer browser (native to your operating system) and, more recently, the Xbox game console.

As for the origin of the company, we must talk about the union of two giants, Bill Gates and Paul Allen . They both founded the company in 1975. Initially, they wanted to create a BASIC instruction translator for the Altair 8800 machine , although as time passed they also released compilers for Fortran and COBOL .

The company’s expansion began to arrive internationally in November 1978 , making its way into Japan, with what is now known as Microsoft Japan . A year later, they decided to move the company’s headquarters to Washington, where it is currently maintained.

Although they had previous operating system attempts, such as Xenix , the company released its first big hit in 1981, known as DOS (Disk Operative System) . Microsoft rose in market shares against all of the competitors that MS-DOS had . In fact, this system was one of the predecessors of its most renowned system, since Windows is nothing more than a graphical extension of it.

In 1985 Windows goes on the market to be acquired by retailers and, with this, in 1989 the Microsoft Office office suite appears , with a lot of applications necessary for all users. Just a year later, Windows 3.0 . Appears , an operating system that quickly becomes a sales leader, due to its new user interface, new functionalities, and protected mode for the Intel 386 processor . Within six months, it became the leading system, gaining even more renown as an expert company in PC solutions.

In 1995 , the reference system called Windows 95 went on sale , which brought great innovations, such as compatibility with plug-and-play hardware , increasing the size of file names, multitasking on 32-bit systems , Start menu and better game support. Within four days of its landing on the market, more than a million copies had already been sold. That same year, the MSN network launched on the Internet .

In 1997, the company acquired Hotmail , what is now Outlook, and at that time it was renamed MSN Hotmail . A year later, Bill Gates, named Steve Ballmer president of the company, although he would continue to remain as the Chairman of the Board of Directors of the same.

The operating system, the great success of the company, is still under development and Windows 2000 is launched , which stands out mainly for the introduction of Active Directory , which allows companies to work with teams globally, in a that they can all be managed from one place; it is the beginning of what we know as a cloud today.

The year 2001 was tremendously important for the company as they released the operating system that has been a sales leader worldwide, with more than 400 million copies sold. It’s Windows XP (eXPerience) , which was so noted for the twist on its user interface. The only problem has been the large number of security breaches that came standard. That same year, in addition, the company entered the video game market with the appearance of the Xbox, a product that makes it the most direct competition to the well-known PlayStation.

After several years of legal battles, and changes in power in which the company was not able to bring anything interesting to market, in 2007, Microsoft Corporation released several different versions of the Windows Vista system , trying to turn the product into a solution for any type of user. This goes on to include several more controls at the security level, such as parental control and Windows Defender .

Very famous was the company’s mistake when trying to buy the great Yahoo! , which is facing serious financial problems, but who does not think that the offer is appropriate, ending up declining the attempt.

The last and pleasant novelty comes with the most current version of its OS, which was free for those who had the previous operating system by obtaining a license. Its new features include the Microsoft Edge browser , which helps wash the image of what many consider a disaster due to the slowness of Internet Explorer , the Cortana assistant and a better virtual environment.

Next, we are going to present a list of all the dates that have been important to this company in chronological order:

The Microsoft Corporation company had a great success in terms of creating electronic tools , as we indicated in the previous section. That is why in this part of the post it would be interesting to relate everything that is known, at the level of both software and hardware and other devices, to know the scope that Microsoft Corporation has had (and maintains) within the technology market.

Operating system par excellence and band-logo of the company . It has been, from the beginning, a best seller in the market, in continuous struggle with Apple . Its ease of interaction with the user has been a direct weapon in its proliferation on PCs .

We have seen different versions, some similar to each other and others that gave a total turn to the interface that the user knew. Always with constant updates , its worst blunder was the breach in security that the XP version presented as standard.

Indicate, again, that it is a considerably improved version of what was another successful product at the time: MS-DOS , which we are already using.

Web browser created by the company that can be installed on any type of Windows, Macintosh or Unix operating system (Free Software) . After a few years of use, and knowing other alternatives, the user has made the cross to the point that it has gone down in history for its slowness, including an endless number of memes that are extolled with it.

However, it is fair to mention that the latest improvements have been very aimed in this regard , making the product become somewhat more used due to the few resources it consumes. Even so, it is far from being among the top browsers most used by the current user.

It is an operating system that is integrated into certain smartphones and PDAs. Successor to Windows Phone , which, in turn, took over from Windows Mobile .

This is at the level of other mobile OS in terms of functionality, however, it is not as successful because of the limited models of devices that mount it. It has its own browser, the Cortana assistant, a multimedia system for TV, music and movies, a browser, calendar and various other applications.

It is the office suite that has brought the most joy to the company . Any user uses its tools to be able to do a multitude of jobs, both in companies and in the simplest tasks carried out at an educational level or at home.

Several different application packages have been created so that each user is the one to select the ones they need and not need to purchase extra products. The most used are the Word data editor , the PowerPoint presentation editor , the Excel spreadsheet and the Outlook email manager . In addition there is also Microsoft Visio that allows you to create flowcharts, organization charts, floor plans and construction, etc., in addition to Microsoft Access .

It is a search engine that had some success a few years ago and is still used as the main solution in some countries , although compared to Google , such use is ridiculous.

It is a computing platform that the company has in its own cloud, the success of which is increasing and integrating an ever greater variety of solutions for the user. Azure AI is making it easier for any company to use artificial intelligence AI in their projects in a much easier and cheaper way.

Sixth, seventh (Xbox 360) and eighth (Xbox one) generation video game console , also created by the brand. It has managed to bring together a large gamer community due to its good connection to online gaming over the Internet . Of course, the company has created accessories for this and exclusive games that cannot be enjoyed on other consoles (sometimes even on a computer).

Email server that has been used for many years in large companies . It includes a calendar and an internal messaging service. In addition, it integrates perfectly with Office so that it can be used in any of your office automation applications.

It is a database platform with the incorporation of a multitude of tools widely used in the business world.

It is a Q # programming language that also includes a simulator and other resources. The objective of this product is that each programmer is able to develop his own quantum program.

Platform that provides many tools for computer application programmers, such as Visual Basic, Visual C ++ …

The Skype tool allows you to make calls and video calls through its own platform. It can be downloaded on mobiles, tablets and computers. It works through the network or by recharging money over the line, so you can always count on this program to communicate with other users.

Messaging client that has been discontinued , although it was admired by many companies that even integrated it into their systems.

Electronic encyclopedia that many people had in their home. It has also been discontinued, but was highly acquired by customers years ago.

It is a store that includes a series of products such as portable media players, Zune Music Pass (streaming music by subscription), music player for Windows Phone and another for Windows devices. Disappears in 2012 . Its current variant, after various modifications, in ” Movies & TV “, a utility that we find on the brand’s console.

Part of the company dedicated to programming video games that can later be used with the XBOX. In addition, he is dedicated to creating applications, streaming games and an online help service known as XBox Life.

It is a line of devices that includes tablets and small laptops . They have good benefits although they do not stand out especially in the market.

LinkedIn was born in December 2002 and opened its doors in May 2003. Its purpose was, and is, to build a network of users totally oriented to business, employment and, of course, the companies that populate the planet. A formula totally based on the possibilities of the Internet and that took little time to capture the attention of the giants of the sector. In fact, in June 2016 Microsoft decided to take the big step and buy it for an exaggerated amount of money .