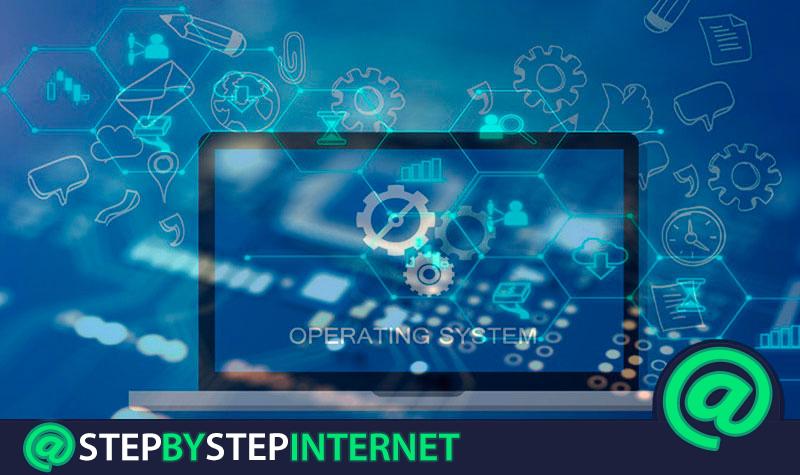 The operating system is the heart of your computer ; well, rather a part of it, a very large one that makes it work in every way that is possible.

Of course, we no longer speak only and computers. The operating systems have reached industrial machines, telephones, televisions and even watches , so that a large part of the technological devices we use today include our own.

Do you want to know exactly what it is and what it is used for? You will discover them in the following lines, along with other information such as types, examples and frequently asked questions about this type of software.

What is and what is an operating system for? Definition

This is the base software of any computer system . That is, a set of programs, with their corresponding information, that executes tasks acting as an intermediary between the hardware and the user .

It is , along with other data, in ROM , a chip with the essential information for a computer and its system to start working . Its execution is therefore privileged .

Functions and features of an operating system

An operating system has several functions, such as:

We see that it includes utilities focused on:

Basic components and parts of an operating system

Any operating system that, honoring its name, allows us to operate, will include the following:

We can classify the OSs according to various points, finding:

It is also noteworthy to communicate that there is what is known as network operating system , a special type of OS that, as we can deduce from its own name, is the software on which the equipment networks.

We can also perform another type of classification that categorizes these softwares according to the device to which they are integrated. Let’s see, in this case, the most famous and some of its features.

For computers and PCs

There are, released and / or patented, almost half a hundred OSs for computers, which is logical, since they are the equipment to which this type of software is most attributed, although we currently find SOs on many other devices. The best known are:

In the case of mobile devices we find a couple of tens, among which are:

In effect, smartwatches also require an OS to make them work and offer us their functionalities.

SmartTVs are now a reality and, of course, they need operating systems to work. The main ones are:

Types of processing in operating systems

We find six types of processing that are not exclusive, the same OS performs one or more of these:

Finally, let’s look at some aspects that make up the bulk of frequently asked questions about operating systems that we often have.

What is the most used OS on computers? < / span>

Since its launch, the operating system that we see the most, if we consider the total number of computers on the planet, regardless of the use we give them, is Windows, with Windows 7 at the top and followed by the versions 10 and 8.1 . These three versions already make up more than 80% of the total OS installed and in use today.

Then we have the latest version of MacOS and Windows XP , with percentages that almost reach 5% each . Another 5% is covered by the two previous versions of MacOS and Linux . The remaining installed OS (other versions of Windows, Mac OS, Linux distributions and others) make up the remaining, less than 5%.

What is the operating system most used in mobile devices ?

Again, we have one winner per win, Android in this case. IOS follows. Both make up 99% of the OSs installed on mobile devices. With tiny percentages are followed by Windows Phone, BlackBerry 6 and Symbian .

Can you have more than one operating system installed in a computer?

Indeed. Depending on your main OS, you can:

How do I know what OS I have installed on my computer?

In general, system startup involves the display of various screens, including a in specific that shows our operating system, with only its logo as with its name and even with the version of the OS executed at the time. This varies, of course, from the software in question but it would be odd that when you start your computer you do not find a screen that tells you, at least, the base OS.

In any case, if you want to find your type of OS and its version, you can do so by accessing the system information.

Going live, with a Mac:

We take Windows for granted.

In the case of Linux:

For the rest of the operating systems, the base is the same, find the system information folder , but, of course, the way to access it depends, in turn, on the same , so it is different in each case. Surely you better than anyone know how to move between menus and access “Control Panel”, “Equipment”, “System” or the equivalent option .

What is the best operating system?

There is no better operating system than another . As you have seen in their characteristics, they share some and differ in others. Therefore, we can say that one OS will be better than another to cover one or the other needs. Thus, you will have to consider exactly what you are looking for in order to determine which one is best for you.