Between 2016 and 2018, this mini-computer company launched the market Pi 3 series which would have two updates later, which on the one hand included news and on the other, a product was presented at an economical price sacrificing performance.

Each of the variants opens the possibility of establish different projects, taking into account the architecture they have. This has led to the popularity of Raspberry increasing when they present a new version and from now on his fans are eager for the features his next board will bring.

In what we have to do, Let’s get right into the Raspberry Pi 3, through its characteristics, performance, comparison with other models and some of the projects that can be considered with this development board.

What is the Raspberry Pi 3 and what is this development board for?

The Raspberry Pi 3 in his first two presentations (B and B +) improves speed, wireless internet capability and other devices. Also presents good RAM, faster processor and improved power regulation that allows it to fulfill different functions.

This mighty little plate It is capable of processing texts, playing videos, shooting high definition games and starting different types of Linux, in addition to Windows 10 without paying anything. Another fact that is worth adding is that if you connect it to an HD television it is feasible view video with BluRay quality.

What are the characteristics of the Raspberry Pi 3 and its main functions?

As indicated above, apart from the initial presentation it had two updates after, so let’s introduce the characteristics of the original version and the additions that the successive ones had.

These models are much more basic than the two described previously. Instead of adding benefits, it subtracts in terms of speed and performance. It was the closing cycle of the style, to give way to superior characteristics. RAM is half of the previous two with 512 MB, it does not have an RJ45 port, which is the same as a network cable port and features a single USB port. The design is similar to the previous ones with the limitations already described.

This update increases processor capacity to 1.4 GHz, but that is not the only novelty. It also has a new 300 Mbit / s Ethernet port, tripling the speed of its predecessor. Apart from this, it has Bluetooth 4.2 low power consumption and a dual band 2.4GHz and 5GHz when it comes to wireless connectivity.

Raspberry Pi 3 performance How superior is it to other models of the brand? 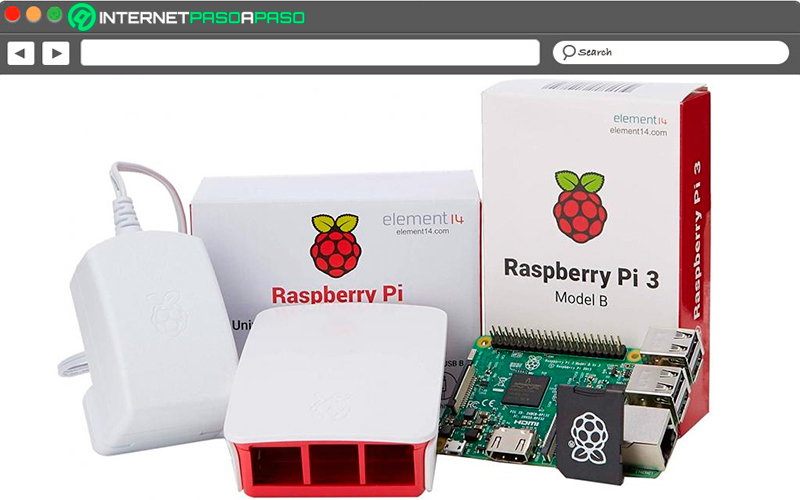 The answer is yes. Compared to the previous versions, the 3 B and 3 B + come with a higher performance processor, while keeping the memory capacity at 1GB RAM, an update that is seen in the most recent models that the foundation has launched.

It should also be noted the number of USB ports, the speed for wireless connections and the Ethernet port that they give it a significant place among those that had been released on the date of its release. Finally, it offers the possibility of feeding it from one of its ports.

Utility of the Raspberry Pi 3 What can we use this version of the classic single board computers for?

Their performances are diverse, starting with being a small computer that can be carried anywhere in your pocket. And when it is analyzed in depth it is concluded that it fulfills practically all the functions of a conventional computer, either desktop or laptop. But also, It can serve as a wifi point, storage system, external services controller, multimedia center, to take the first steps in programming and to create a home surveillance system.

Raspberry Pi 3 versions What are all the ones that exist and how to decide the best one for my project?

The three versions that were launched on the market were the B, B + and A. Due to the technical characteristics and computer advancement, If we have to opt for one, we stick with the Pi3 B + for its speed, processing capacity, Full integrated HDMI, its easy mounting and as an addition it is suitable for use with demotic purposes.

Before choosing one of these plates for your project, we recommend that you analyze elements such as software compatibility, connection ports, processor speed, and Bluetooth. Of course, it must be borne in mind that each new model brings more power, so there will always be a brand ahead.

We will show you below some of the projects that you can carry out with your Raspberry Pi 3 board:

One element that will help to carry out this project with ease is the GPIO panel. It is true that they can be a bit difficult to program, but with these characteristics you take a step forward. The idea is that the sensor also carries an alarm, for which you will require to complete the task apart from the Raspberry a piezoelectric speaker, an infrared sensor, the resistors and the wiring that is little.

Lovers of this kind of card, one of the frequent uses they give it is create a retro console together with an emulator . Once it is programmed with some development, it can be installed and played without any inconvenience. Arcade games from the 90s.

Looking for the proper documentation, assembly becomes a simple and fun project. Precision is one of the elements that are needed because the pieces must each be in place and well aligned, but in the end the work has its rewards for the amount of things you can do.