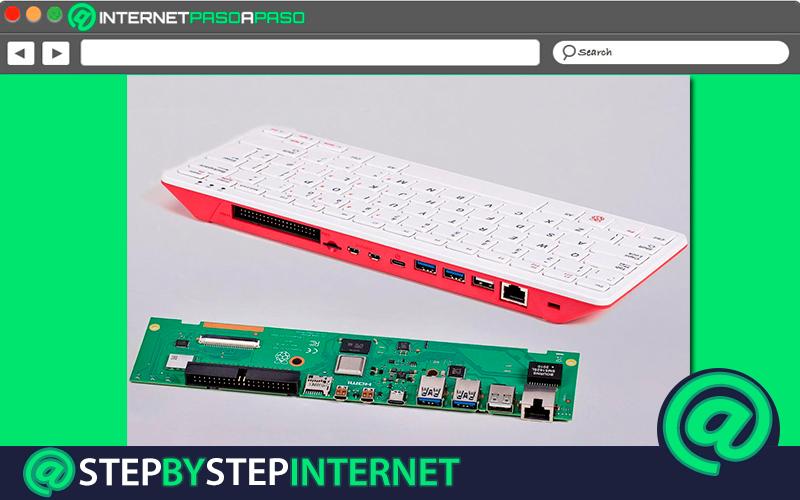 The british foundation in charge of Raspberry Pi project has created a new alternative that will allow users to get much closer to their products.

This is how the new Raspberry Pi 400 which is the complete opposite of the previous models, and now it is a Desktop PC complete built in a form factor of compact keyboard.

This means that it is a project for those people who do not want to do projects, but use it like any other computer. Therefore, here we explain What is it, what is it for and what are its most interesting features?

What is the Raspberry Pi 400 and what is this desktop computer for?

There is no doubt that Raspberry Pi has surprised and revolutionized what is the world of mini computers, now with the appearance of the Pi 400, has managed to attract as much attention as possible, and it is that all the components of the Raspberry Pi have now been added to a keyboard. Now you can have a keyboard that will actually be a fully configurable computer and that you can use whenever you want.

The main idea of ​​all this has been to offer an alternative to all those people who want is a desktop computer and not a miniature board to do experiments and projects. That is how this keyboard has its own internal board and different ports that will allow you to cover the minimum needs. The specifications of this new computer will cover the basic needs of file browsing and management that users will need.

In addition, it will have the same processor as the Raspberry Pi 4, so it presents a ARM Broadcom processor 1.8GHz quad-core, 5GB RAM memory, USB 3.0 and 2.0 ports, USB-C for charging, Gigabit Ethernet port, Bluetooth 5.0 low energy, WiFi 5 and with more than enough hardware performance to decode video in 4K and 60 fps using the H.265 codec.

Where the dimensions and design of the keyboard are the same as any other, except for the thickness that is due to the need to include components and connectors for its funtionability. Like any other Raspberry Pi model, it also supports a micro SD card where the operating system and applications run.

In this way, those who need a basic desktop computer at a low cost, then the Pi 400 is one of the best alternatives, where its main advantage is that it is already prepared, so you only have to do the respective cable connections and connect to power and ready for operation.

Features and Benefits How powerful is this Raspberry desktop computer?

It can be said that it is the Raspberry Pi 4, but now with an improved version, where it is clearly a much faster and more complete version than the previous version, where it has included its own heatsink in order to help release heat from unit, which will allow to achieve a higher speed without having to resort to mechanical ventilation.

In accordance with all this, it should be mentioned that it has included new features that are very important for everyone and which we are going to show you below:

Taking into account what are some of the most important characteristics of this keyboard, the following will show you what all its features are, for this, follow in detail everything that we will show you below:

As you can see the Pi 400 is much more powerful than Raspberry Pi 4, but it should also be mentioned that it loses some connectivity options, since lower the number of USB ports and you also lose the composite video connector, the headphone jack, the DSI connectors for the camera and the DSI for the touch screen. As for everything else it can be said that the desktop Raspberry outperforms its predecessors.

Operating System for Raspberry Pi 400 What is the best that can be used in it according to the use that I will give it?

Just like occurs on all Raspberry Pi models for project use, both the operating system and applications are stored in the Micro SD card, since these plates lack an internal storage. The Pi 400 comes with an extension of GNU / Linux based on Debian, which is optimized for ARM processors. It should also be mentioned that it has a very friendly graphical environment for those users who are just starting out.

So on a visual level it will be very similar to as if you were using a Raspberry Pi with Windows. This means that they will be able to enjoy windows and many other options present in the Microsoft operating system. Although it should be mentioned that all this will vary depending on the functionality that you want to give your Raspberry Pi 400 desktop, so you will be able to choose other alternatives such as LibreELEC or Ubuntu Server if you want.

What do I need to build my own miniature Raspberry Pi computer? Main materials and components

Keep in mind that the Raspberry Pi in a computer like any other only that it has a much smaller size and does not have a case, screen, or other common accessories that are obtained in any desktop computer. Thus, thanks to all their functionalities, these boards have been used to create laptops housed in an aluminum briefcase, design 3D printers, to create video consoles, mini servers, among others.

As you can see, the possibilities offered by these plates are infinite and as a measure to give a new push to all this, it has been launched the Raspberry Pi 400, a project that departs a bit from the already known project for these boards and that is much closer to that of ready-to-use mini computers. So they are programmable, with a very good performance, comfortable, low price and size and easy to transport from one site to another.

Be able to build a Raspberry Pi 400 desktop It is very simple, you can do this either by purchasing the complete kit or the keyboard by itself. Keep in mind that the price of this keyboard is 70 euros from the web of the form, and the kits have a value of 100 euros. In the case that you choose only the keyboard, you will have to add other components for its operation, such as mouse, monitor or TV, USB charger, among others.

While by acquiring the kits you will be able to enjoy all the following accessories, so starting up this PC will be much easier:

How you can see it is better to buy the kit, since this will offer you greater ease of use and installation, so you only have to connect it to a monitor or TV via HDMI cable and start enjoying it. In addition, the kit provides you with a usage guide that will help you with any questions you may have in your first beginnings.