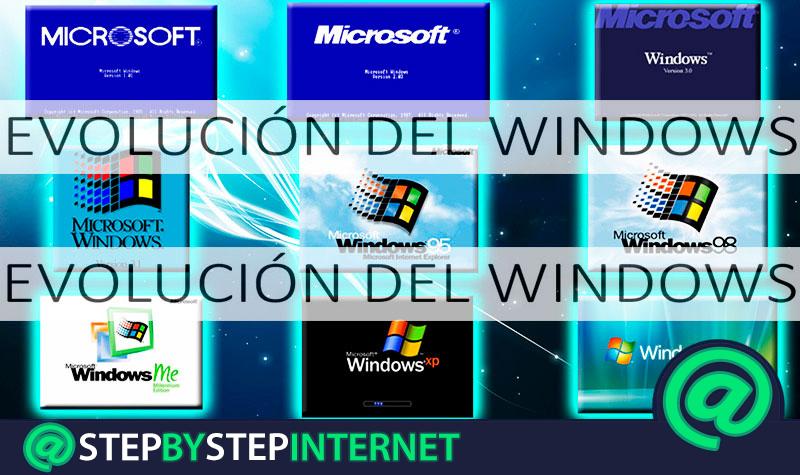 Over time, Microsoft Windows has been listed as one of the most complete operating systems . Therefore, it dominates this market with great comfort and thanks to it, it is installed on more than 90% of the computers with Internet access.

In this sense, such an operating system can be defined as a set of programs that simplify the administration of the resources of a PC. Especially, for the extensive development that has shown during its 36 years of existence . In that way, it is considered of great relevance to know what are the versions of Windows to date.

That is why, in this post, we will focus on detailing the most important aspects around the origin and evolution of Microsoft Windows . Apart from that, chronologically, we will indicate the known versions of this OS, naming its most interesting features.

What unique features did the first version of Windows come out?

To start learning more about how Microsoft Windows was in the beginning, it is necessary to narrow down the main features that its first version exhibited. Which, we can exemplify by explaining a little about the origin and history of this renowned operating system .

First of all, it should be noted that the OS in question owes its name to an English word which, in Spanish, means “Window” and of course, is associated with the way in which The system presents the resources of your computer to the user. Simplifying thus, the execution of the most common tasks to be performed on the PC.

Now, this computer system was developed and marketed since 1985 by Microsoft, which was founded by Bill Gates 10 years ago. That is, in 1975 and initially, it began distributing the old MS-DOS operating system.

In this sense, at first, Windows was only created as an MS-DOS add-in . However, in view of the novel Graphical User Interface (GUI) that it showed to the public, it was estimated as one of the best computer proposals.

Although, certainly, it had some limitations and among them, the impossibility of including a recycle bin or guarantee the overlapping of windows . Put, this was prevented by Apple to protect its operating system and thus prevent Microsoft from plagiarizing its product.

In reference to its history, Microsoft Windows did not have as easy beginnings as the public believes. Since, this OS was highly criticized and accused by launching unfair competition against Apple and with that, it was involved in a great controversy.

However, after this and thanks to its popularity as a free software in constant growth and development, it took a notable boom and attracted many manufacturers and buyers. This, as of version 1.0 in which around 55 programmers were used and went on the market on November 20, 1985, specifically.

This version, originally called “Interface Manager” , but one of the marketing managers of the Microsoft company, said it would be better to name it “Windows” to attract more to the entire market. Basically, it supported the use of mouse, screen graphics and printer independent of the device, as well as drop-down menus.

Timeline of all versions of the Windows operating system that exist

Now, we have reached the section of the post where we will detail each and every one of the versions that have existed of Microsoft Windows. Which, of course, we will do chronologically and accentuating the characteristics of greatest interest , below:

As we indicated earlier, the first version of Windows became known as the 1.0 that had the possibility of being called “Interface Manager” , but when analyzing certain aspects of marketing, they decided to call simply “Windows” .

Among all, this version was distinguished by the criticisms it obtained when being a kind of “copy” of the Apple interface . Indeed, it could not include certain native Apple ideas, such as the recycle bin. Which, he added some time later when reaching an agreement with the apple company.

Taking into account some other details, we need that Windows 1.0 emerged as a graphic complement to the DOS operating system. In addition, its best novelty was simply the incorporation of the Control Panel .

Two years later, the second official version of the operating system in question is launched. Which, while also designed to operate as an MS-DOS add-on, gained a bit more popularity than its predecessor .

In this sense, its success was thanks to the incorporation of new applications to facilitate certain tasks to its users, among which are: Excel and Word . In addition, it also added overlapping windows, icons and PIF files for Microsoft’s DOS operating system.

It should be noted that, this version received updates for 14 years , so it was only until 2001 that it had technical support from the company.

Before the publication of Windows NT, apart from version 2.0, others were also known as: Windows / 286 2.10 and Windows / 386 2.10 . Which were launched around May 27 of the year 88 ‘and were characterized, for using the memory in real mode and for the first time supporting HMA or High Memory Area (high memory area, in Spanish).

However, in that same year, Windows NT emerged once the company hired “Digital Equipment Corporation” , a group of developers led by Dave Cutler. Thus, it was considered one of the most important at that time due to the fact that it works on multiple sets of computer architectural instructions and on multiple hardware platforms. In addition, it was the first to introduce the Win32 API.

But, only until 2001, this version of Windows is publicly demonstrated. Which, at the time, was called “Windows Advanced Server for Lan Manager” at a developer conference.

In 1990, the Microsoft Windows 3.0 operating system is released and launched, which had more notable changes compared to previously published versions. Although, at this point, still belonged to the graphical user interface of the MS-DOS operating system .

Through this version of the OS, the File Manager and the Program Manager were put to use for the first time. Taking into account that, from this, one of the most important versions was designed (specifically, the 3.1 that we detail below).

With the emergence of version 3.0, the design and development of Microsoft Windows 3.1 began, which, in original code, was known as “Janus”. In this, thanks to the TrueType font system that is cataloged as a set of highly readable fonts, Windows was considered a viable platform , for the first time and also worthy of being an independent Microsoft operating system TWO.

In this sense, Windows 3.1 showed great success for its use of TrueType fonts and in addition to it, for other graphic additions of great relevance . Because of this, Windows managed to outperform the IBM operating system in terms of sales and started the design of a new update called “Windows 3.11” that had even more sales.

Initially, this version of Windows was known under the Chicago code name and was completely consumer-oriented . Given that it was an operating system designed to have support for preventive multitasking and one of its biggest changes, it was evidenced in the 32-bit code.

However, Chicago left some parts of the code in 16 bits, but without directly using real mode for reasons of performance, compatibility and development times. Now, shortly before its launch, they decided to call the version as “Windows 95” and it exhibited three advantages of great interest:

From this version of the operating system, excellent graphic improvements were made, which were much more noticeable than in the older versions. Standing out, in addition, for include the input of DVDs and the incorporation of the USB port . Taking into account that, at this point, software and hardware requirements were increasingly demanding.

However, due to some errors caused by the Internet Explorer browser, the company decided to launch a second version of Windows 98, but in 1999. Which, operated under the name “Windows 98 Second Edition” and in addition to eliminating these errors, it had the ability to allow several computers to connect to the same Internet connection, simultaneously .

It should be noted that, the Windows 98 version only had support from Microsoft until July 2006 , that is, for eight years in total.

During this year, users began buying the full version of Windows 2000. Which, was based on the NT technology of one of the versions of years ago and was considered an operating system more sophisticated.

Subsequently, specifically on September 14 of the same year, a new version called “Windows Millennium Edition” was released and only a few days later, on September 29, it was published “Windows 2000 Datacenter Server” which was a version with support for 32 processors and thus, was aimed at large computer systems.

Only one year later, the Windows XP version was released, which remains one of the most recognized so far. Since, he starred in a great change that Microsoft had with Windows due to the extraordinary graphic improvements, greater agility and a great increase in speed .

In addition to this, Windows XP is characterized by being the first Microsoft operating system to add a 64-bit version . It also incorporated excellent functions such as encryption of system files, remote assistance, support of WiFi networks and in view of this and many other features, it was able to make a huge explosion in the market of operating systems worldwide. / p>

Six years passed, so that a new official version of Microsoft Windows will be released. Which, concluded its development process on November 8, 2006 and was put on sale in volume licenses for large companies on November 30, 2006. However, it was published until 2007 for users in general.

Among its particularities of greatest interest, we highlight that this version could be obtained directly from the Microsoft website, where they facilitated its purchase and download. In which, graphic improvements were added and the upgrade system to higher versions with the Windows Anytime Upgrade. But, it was not the most successful OS, since it is even considered one of the worst failures of the technology company .

This failure, resulted from the large number of errors that showed in the interface, although the company had high expectations with him. So, it only ended up being the slowest operating system and the one that suffered the most from overloads .

Although its development was completed on July 22, 2009, it was published until October of that year. This development took two years after the Vista version and through it, Microsoft wanted to correct everything bad that its predecessor had shown .

For this reason, with Windows 7 it was possible to obtain an operating system with much more efficiency and excellent improvements in terms of security, performance and the most important system requirements . In addition to this, it is a proposal of Windows completely adaptable to its use in systems with touch screens.

Among other details of interest, through this version, an improvement in consumer assistance was also promoted. To do this, to solve the most common problems of the operating system and also showed a new design of the taskbar along with a system of more elegant icons and, in short, a better interface.