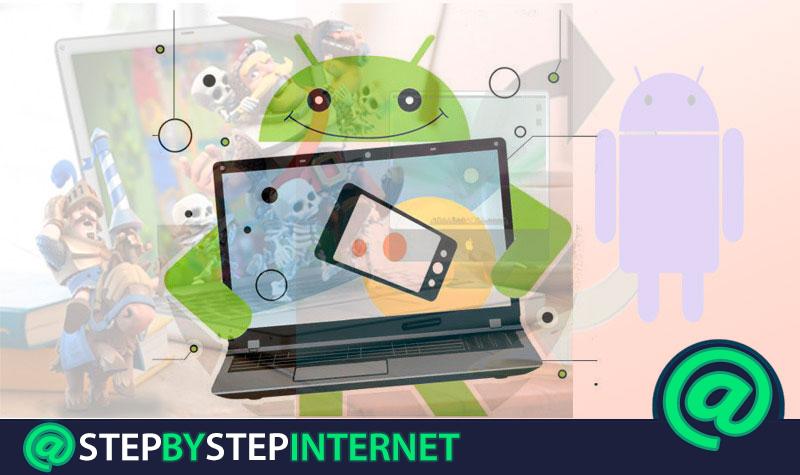 The Android Operating System is today one of the most important and advanced in the world. It has a lot of functions and features that have led it to become one of the most popular.

In this way many users choose to install softwares that are capable of running the Android operating system from the Mac computer . This in order to work with the operating system of Google for mobile.

In order to run this system on a computer it will be necessary to make use of an emulator . It is important to mention that today there are many softwares of this type that will help you carry this out. However, not all of them are really effective. That is why here we present a list of the best emulation programs.

In general, the Android operating system is one of the most sought after in the world, it is characterized by being highly customizable and having a wide range of technology. This is how many users especially iOS or Mac, want to start testing this Android system on their computers.

For this there are emulators that can help you run Android on your Mac computer in a very simple way. They are characterized by presenting all the functions of Android, even many emulators already work with the latest version of the Android operating system .

However, there are many softwares available of this type, but not all of them are able to meet the needs of their users or simply do not have all the necessary features to be placed among the best programs of this guy.

In this way, here is a list of the 10 best emulators to install on your Mac PC:

It is important to mention that these emulators are capable of running both applications and games of all kinds and with them you can do whatever you want. Most of these softwares are characterized mainly by being very simple to install and manage as is the case of Android Bluestacks Emulator . It currently has more than 130 million users currently and is integrated with Layercake technology to make its operation more optimal.

In addition, Bluestacks Android Emulator is backed by the investment of Samsung, Qualcomm and Intel , which ensures you a very well designed and very professional software with which You can get really good results. All this has made many users of Mac or iOS interested in trying or managing a bit what is the Google operating system, which they can use directly from your Mac computers.

Andyroid emulator is a software that has open GL hardware support. It is characterized by its easy operation and is very easy to install. Ideal for those Mac users who want to start using Android from their computer.

In this way, you can start turning your PC into a phone to start enjoying all those Google Play apps , be it games or some special tools . It should be mentioned that Andyroid Emulator has a customer service with which you can interact to clarify any doubt you have about the program and its operation.

Therefore, if you are looking for software that is able to help you get results from another level and far superior to those of other emulators, then your best option is Emulator Andyroid.

Another one of the most interesting Android emulators on the market, it specializes in the games area. Therefore, if you like gaming applications Android operating system, KO Player becomes a very good alternative to be able to use them from your Mac computer .

However, despite being especially focused on games, this software will also allow you to install any other application that is available on Google Play as long as it is compatible with the version of the emulator.

Usually, the most prominent applications within the emulator are the Clash of Clans, Super Mario games, messaging apps like WhatsApp, Telegram, among many others. It also has features that will allow you to record games in case you want to use them without the need for the emulator.

Among its main features we find that it is almost compatible with all Android applications . In addition, KO Player has a completely free download and that will allow you to live an excellent experience when using the Android app on the Mac .

Genymotion is another of the most important emulators on the market, it has a lot of functions and tools that will allow you to have the best experience within of the Android . This is how it gives you the possibility to test how a device and a Android version would work with a specific app, this will let you know how the application works before installing it.

In this way, with Genymotion you can start running the Android emulator directly from the Mac or the cloud computer, being this a characteristic that very few softwares of this type can carry out, which gives it an advantage before the competition. This allows you to share the operation of the application with other users.

However, it is important to mention that Genymotion is not free, therefore, you will have to subscribe to some of their plans to start using it and each of its tools.

This emulator is not one of the most popular in the market when compared to other softwares . However, it has very important features that lead it to be located among the most attractive emulators for many users, and it has a system of update frequently that allows is always updated with the latest tools.

Android Studio is designed primarily for those users of Mac or other operating systems start testing the different Android applications from their computers, which can be downloaded from Play Store . It has all the necessary tools to start enjoying all these apps on the PC.

Other alternatives that you can find on the internet to start getting Android games from your Mac computer. Therefore, if you are a fan of games of this operating system you can start to make use of the Nox Player emulator, it has a number of very attractive features and functions.

In this way, you can start enjoying all the games available on the Play Store from your Mac. Among its main features we find that it allows you to create different accounts in the event that your PC is familiar.

This will allow you to have your own user with your favorite games privately. In addition, it also allows to record favorite games and in turn share them through social networks. A software that is specialized for games which can be very useful for those who they have heavy graphics and makes their speed a little slower than the rest.

Many of Mac users are unaware that VirtualBox can be used as an Android emulator. It will allow you to use almost all available applications in this operating system and which you can download from Play Store . It is considered as one of the most efficient emulators that allow you to play any type of game regardless of whether it is very heavy or not.

VirtualBox is responsible for controlling the amount of resources and hardware necessary to maintain excellent performance on the computer, this will prevent the computer from being damaged or inconvenience while running the emulator Android in background . It is recommended that at the time of installing this emulator you have at least 8 GB of RAM on your computer , it can be installed completely for free.

An emulator that has been designed so that it can be used by all people without the need to be a professional in this area. It has a very sophisticated interface and has unique and very professional tools.

This is how with YouWave you can start having your own Android on your Mac computer , where you can start running any application and in turn have background the desktop of the operating system simultaneously.

This software is ideal for running those Android games applications downloaded from Play Store, and in turn you will create a folder where all downloaded apps will be stored. It has dynamic controls and volume buttons that will help you have a better experience.

However, this emulator is not free , therefore, to be able to use it you will have to purchase one of its subscriptions and that way start enjoying its services.

It is worth mentioning that ARChonte is an emulator very different from the rest, and not only because of its interface, but basically it is not a software that you have to download and install on your computer , it is an extension of the Google Chrome browser with which you can start working with Android from your Mac computer.

This becomes a great advantage for those users who have little space on their hard disk or do not like to be downloading programs to their computer. However, since it is not a program, it does not have the same number of functions and tools that can be found in such software.

But, in the same way it allows you to develop Android applications on your Mac in a very simple way, where you can start enjoying Android games, as well as of other apps of your choice. ARChonte you can install it in your Chrome browser completely free and which stands out for its easy operation.

Finally, we present this emulator called Windroy , it specializes in representing Android applications and functionalities on a Mac computer. This software is mainly used by young people, since it has a fairly youthful interface and where you can use almost all the Android games apps on your computer.

Windroy works with the Android 4.0.3 operating system and stands out for its great speed when running any program, which makes it one of the best Android emulators on the market for Mac . Currently competing with softwares such as YouWavw and BlueStacks, so its use is highly recommended.