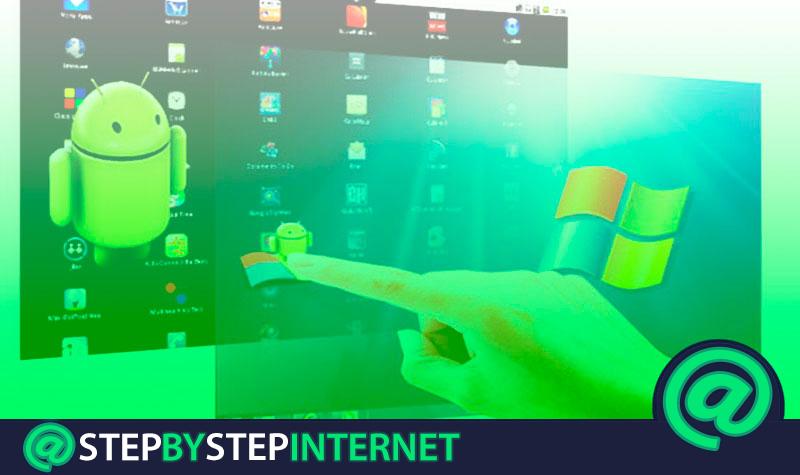 Over time, programs that emulate being another device, an operating system which are commonly used in computers, have become popular and improved. In this case we will talk about Android emulators , which mimic a computer covering virtually all the features they contain, but from a computer.

The same allow its users to install any app of the Play Store practically without restrictions, added to this, these emulators can be adapted so that the user can use them with the cursor, the keys on your keyboard and even the touch screen of your computer if you have one of this type.

For these and many more reasons Android emulators are a great tool to use, then we will talk more about them and we will give you a list of the best you can find.

What is really an Android emulator and what can we do with them?

An emulator is basically something that mimics something else without really being that. An Android emulator is that, a program that seems to be a system or computer, with Android in this case, used from a computer with Windows 10, 8 or 7.

What we can do with them depends on the purpose or configuration that the emulator has, as well as the capabilities of our team. Its functions range from, install social networks, Facebook, Twitter, Instagram, Whatsapp, etc., as well as games. Commonly these emulators come with a preinstalled version of Android.

It may not be the last in the market, but it is the most recent. This is because its programmers decided to place this version for compatibility and performance on computers, although over time they have been updated and improved to provide a better user experience.

What are the advantages of using a low resources in your Android emulator? Windows 10, 7 or 8 computer?

There are different advantages that you can use in Windows, among them we can name the following:

There are many Android emulators currently on the market, some better than others, due to how they are designed or depending on the resources requested from the host system (ie the computer).

Next, we will present a small list of the different types you can use and a brief explanation of their characteristics, so if they attract your attention you can try them and choose which one you stay with.

It is a rather peculiar Android emulator, This version allows its users to install this OS directly on their computer, as if it were a new system. That is, when you start the computer, it will turn on as if it were an Android device and not as a Windows computer.

Therefore its users are recommended to install it on a separate hard disk or on a new partition, in order to use both operating systems simultaneously (Windows and Android).

The installation of this can be somewhat complicated, because of this it is best to be guided by tutorials to perform it correctly.

It is one of the most popular Android emulators today, although the same turns out to be one of the heaviest in the list that we present to you. But of course, this does not prevent it from being able to work on somewhat older equipment or with little processing capacity.

However, it is advisable to overcome the minimum requirements of the program. It is easy to use and is primarily designed to play Android games using your computer.

It allows you to configure the keyboard and other peripherals of your computer to be able to use them with the emulator and thus improve your gaming experience. Just download it and follow the steps dictated by the program to be able to use it without problems.

Memu is a very basic Android emulator, its use is simple and it does not take much process to install it, just download the program, run the installer and take a few small steps to configure Google account Basically what is done the first time to get a device with it.

The program is designed primarily for games, allowing for quick and easy configuration of controls for it. Its interface is not problematic and has a great advantage, and it facilitates the fact of opening multiple rooms from different accounts.

This is a bit different from the others, it is designed for any user since its use is very simple, however, has different options designed for users with more experience, allowing a free development of applications or more in it.

It is fully paid and has different versions of the program. Its price varies depending on the functionality or extension of use. It has a desktop version and a cloud version, each designed for various procedures. In case of not knowing which one to choose or want more information, the web has an email service where you can communicate and know more about it.

The designer company of describes this program as the best Android emulator for games. It has a very simple use for anyone who comes to use it, so it seems not to be complicated. It can be configured in different ways so you can use it and enjoy all these that are your selection without problems.

This program is very different from those explained above and those that will be explained later. This is because it runs as a Google Chrome extension.

Its configuration may be somewhat slow, but the program is very useful if you have a decent computer to use it, is a tool that will be interesting to use.

Simple and quick to use, does not require many steps to install and much less to use. You can quickly configure the controls, so you can play a wide variety of games in this without waste virtually no time.

This program is fully functional and very easy to use, lightweight and with a very fast interface, which translates into one that consumes few resources, which makes it an excellent option for computers with low capacity. It is available for Windows 7 and 8, but can be used in Windows 10 only in case of failures during installation or during execution. If an error occurs, it is best to use another program.

There is a very important fact that must be taken into account and that Andy was accused of mining Bitcoin on the users’ PC without his consent, so he is presenting legal problems for said exercise. Therefore, this emulator should be the last option for users who wish to use it, and if so, always at their own risk.

It is a totally free and reliable emulator, which allows you to use the touch screen of your computer, if you have one. It has a quick configuration for use in games, has a gamepad, you can create custom settings of your controls and others, something that very few have or simply do not have. Droid4X allows you to capture the emulator screen, so you will no longer need other programs to record it.

VirtualBox , as the name implies, is a virtual box. A program that allows virtualizing another program within itself. For example, if we use it to reflect the Android system within Windows, we will run the Android operating system from scratch and not as an emulator, as the cases previous.

Its configuration can be somewhat complicated, the requirements for its use are the following: You have to download the Android iso image on its official website, (the version of Android you want to use) and a Once you have it, with the use of the program you can install Android on your computer virtually.

This program just came out recently and was created in India. Lets use Android natively What does this mean? That for its use it is necessary to create a new partition or use an alternate hard disk drive. Since the Android system will be installed as new on the computer and will not be used in a linked way with Windows or other .

Its official website has a wide variety of program information, such as installation processes and even program features. We recommend that you use a translator to fully understand the information it contains.

This program is aimed at experienced users, since it can be used as developer functions. It contains an emulator to program the applications and games that are developed in it. Although it is obvious, it is only recommended for programmers or very experienced users with Android open source and programming.