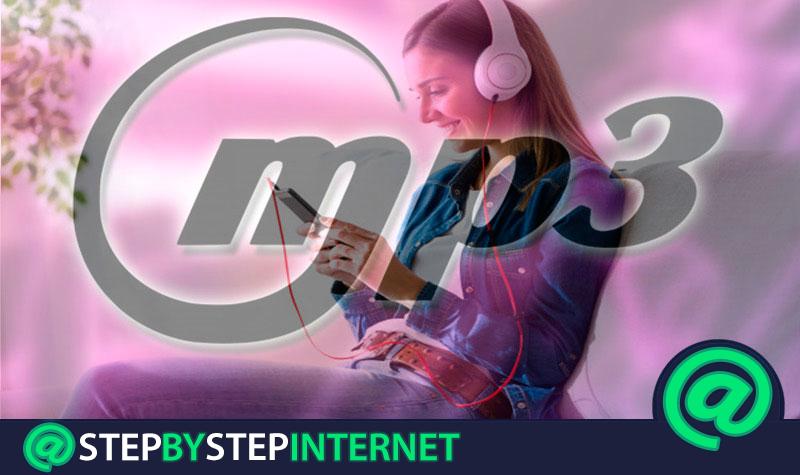 Commonly, mobile and Tablets users use their devices to download music of any genre and enjoy it wherever they want. Even to connect them to your car, since the famous CDs and the memories that were especially used for it have gone out of style. However, those who own iPhone or iPad , think that this is not a simple task to perform, given that iOS can generate certain inconveniences .

But, fortunately, there are currently applications that simplify this task on any device and of course, also on all iPhone and iPad. The best thing about it is that these are apps that are very easily found in the App Store and a lot of them, provide absolutely free service .

This is why, we have made this post for you, if you are a user of one of these devices, so that you can download the MP3 music you want and at any time . Highlighting that, most of these softwares have revealed excellent results on iOS over time.

To start, we announce this app with many downloads on iPhone and iPad devices that in addition to being free , exhibits the great advantage of having instant access to your audio and video files in the cloud, whether in OneDrive, Box, Google Drive, Dropbox, etc. And with that, you can save space on your device .

It also allows to listen to audiobooks directly from the cloud (with narration and marker speed control), as well as play MP3 music and other types of formats (aac , m4a, wav, aiff, m4r, mp4, caf, mov, mp4, avi, ffmegg, etc.). It also makes it easy for you to create music playlists in cloud services. It is definitely one of the best options for those who have devices with 16 GB of storage capacity .

The great boom that has taken this application to download music is extremely remarkable, starting because now it is very recognized in various social platforms. Since, is estimated as the best way to listen to music and podcasts on mobile devices and Tablets , so it is compatible with iPhone and iPad, in addition to getting for free in the App Store (with ads).

Now, among its features we distinguish that you can find any track, artist or album on the platform. Also make and share fully customized playlists . Even Spotify has with thousands of Podcasts (even originals that you can’t find anywhere else). It is valuable to note that also exhibits a Premium version .

Shazam is available and free in App Store , this is one of the most popular apps worldwide to listen and identify music , in addition to being used to get the lyrics of the clues. Taking into account that, during each month, the application is used by around 100 million people .

In this sense, its main features are based on the following parameters: You can listen to song previews with Apple Music and include them in the playlists of that same platform or Spotify. It also allows you to download YouTube videos and with its “ Auto Shazam ” function, the same app will find songs of your choice. Everything you get from this platform, you can share it on WhatsApp, Line, Facebook and Twitter .

With more than 9 million songs in MP3 format , this app available in the App Store is another good solution to get free downloads on iPhone and iPad. Additionally, it has the characteristic that it has more than 200 genres and thus allows its users to explore among multiple options.

Added to this, it contains the option of organizing playlists completely customized and designed to your liking , which can be adapted to any occasion, activity or mood. Among other things, the application issues recommendations and new releases constantly.

This is another ideal application to download and listen to music in MP3 format, since it has a library with more than 20 million songs of practically all the genres that exist until today. Bearing in mind that it is considered one of the best mechanisms to transmit music quickly and then download it to your iPhone and iPad. One of its advantages is that the concept of Beats Music is quite interesting .

On the other hand, among its cons we highlight that the interface is somewhat confusing and you can also find several songs of low quality. Now, in reference to its operation, you just have to select the track to listen to, click on “ Play ” and the music will load in the background and to download it, just press the button “ Install ”.

It is one of the most complete solutions for downloading music in various types of formats, including MP3 . Which, is compatible with iOS devices and is free in the App Store. In this sense, it is considered complete because it also provides other functions such as several video players, video clip downloads, photo viewer and even an integrated web browser.

Display multiple management options and among them, features to share on other platforms stand out. Which means that, in a nutshell, is an advanced alternative . But similarly, it has problems such as slow download speeds and unexpected app closures.

It’s free and one of the apps with the best features to download MP3 music on iPhone and iPad . In it, you can browse and search songs of any genre and unlimited. Thus, it presents options such as music streaming with just one touch ; which translates into a quick fix.

In short, Musify Pro + contains a complete media player, an excellent playlist manager that you can adapt to your liking, just like a music player in the background and also has lock screen playback controls . It even displays playback of complete Top-Charts tracks continuously and automatically.

It refers to another alternative widely used by iPhone and iPad users to download music for free. In Tidal you will be able to reproduce and discover tens of millions of songs and clips, without commercials even if it is the free version. And for the benefit of its users, it integrates a function through which you can listen to offline music .

Among its most interesting features, we highlight the following: add 56 million songs and around 225,000 videos that you always have at your fingertips, its sound quality is extremely high, presents exclusive content that you don’t find on other platforms and works with music experts to make original playlists, video series, documentaries and podcasts .

It is also considered one of the most used apps to listen and download MP3 music on iPhone and iPad , as it allows you to access millions of songs and countless playlists that can satisfy all Tastes of its users. You can even enjoy the songs that best fit your location and your emotions , thanks to Google technology.

This application contains a free version and a subscription version . The first one, stands out for allowing storing and playing streaming up to a total of 50,000 tracks from your personal collection . In addition, it sends you recommendations that are based on your activity, tastes and humor. However, the paid version allows access to 40 million songs , works offline, does not broadcast advertisements and adds YouTube Music Premium services .

It is an app to play and download lists, hits and albums ; highly recognized worldwide and thanks to this, it refers to an excellent option for iPhone and iPad users. To detail Deezer, we indicate that contains 53 million songs in streaming of all genres and constantly, the same platform issues recommendations chosen especially for each of you.

Among other functions, it presents an option known as “ Deezer Flow ” that mixes your music with new discoveries that are based on your greatest preferences and so, with just one click you can listen to your favorite songs . In addition, you can count on unlimited MP3 music downloads , listen to it offline and without advertising .

It is a free app that offers purchases within the application and you can download it directly from the App Store. This is based on a music and download player that works perfectly on any iPhone and iPad. But, in addition, adds audio equalizer , id3 tag editor, playlist manager and bass amplifier.

For the benefit of its users, it has the function of listening to music without an Internet connection , that is, it emits a good offline operation. Therefore, it is only necessary to download all the tracks you want to listen to them whenever you want. As another of its good features, we highlight that contains audiobook player with very useful functions .

This other application ideal for downloading music on iPhone and iPad is widely used worldwide, given that constantly presents numerous downloads in the App Store . One of its best features is that it is completely free and also has cloud storage support (compatible with Google Drive, OneDrive, Dropbox and iCloud Files Which allows you to save a remarkable space on your device.

Among other details, this app contains virtual folders that enable the grouping of files from various sources , that is, from both local and cloud sources. Additionally, it has bookmarks and file manager, quick search bar , browser with multiple tabs, pin to protect folders, among others. Finally, it has offline operation.

This list could not miss the famous iTunes that, for many years, has been used as an ideal platform to download music of any genre . Although, unfortunately, it is not completely free. Since, you can enjoy MP3 music through iTunes but only with the purchase of the single or album you want .

Among its benefits, we find that it allows all users, immediate access to music content in digital format for an absolutely affordable price. On the other hand, it contains a function called “ single of the weed ” in which, the renowned platform promotes a certain song and iPhone users can download it for free.

As another good alternative, we present this option to download music for free on your iPhone or iPad through the App Store. Napster gives you the simplicity of playing your favorite songs and saving the ones you want on your device very easily , in addition to creating, in just seconds, playlists with all the tracks you want.

It has a wide variety of over 40 million songs and best of all, you can listen to them unlimitedly and without commercials . Added to this, it adds fast playback and has the ability to stream to hundreds of devices . As a social feature, this app allows you to find your musical match, in order to discover new music from people with similar tastes.

To conclude, it is advisable to use this application with more than 6 million downloads and totally continuous evolution , because it has had more than 17 updates during the last two years. In reference to its details, it is necessary to accept that allows offline or streaming playback , once you store all the music you want in your favorite cloud. Thus, it can be in Google Drive, Box, OneDrive, Yandex Disk, Dropbox , etc.

For its part, the application handles all kinds of genres that exist to this day , in order to satisfy the tastes of all iPhone and iPad users. Among other details, he adds: playlist organizer by title or date, supports MP3, FLAC, M4B and M4A formats; contains search bar, automatic shutdown to listen to music when you go to sleep, “ Force Touch ” for iPhone 6s and 7, background playback with controls on your headphones, etc.