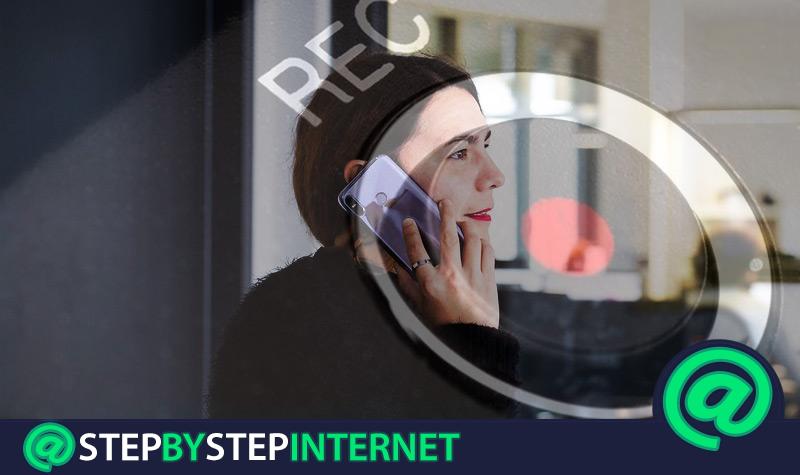 UPDATED ✅ Do you want to Record the voice of your phone conversations on Android and iPhone and you don’t know how? ⭐ ENTER HERE ⭐ and discover how to do it ✅ EASY and FAST ✅

Even though the means of communication have developed in an impressive way, calls are still one of the main methods that people prefer to communicate. This because it is a more direct means at the moment of wanting to transmit the information and that allows us to ensure that it was received correctly.

The good thing that the equipment has advanced so much is that they offer you the tool to be able to record the conversation of any call you make or receive from your mobile. It is something very useful since it can even help you in various things, be it for self-defense, for work or because you want to save valuable moments. But it often happens that many times when we look for this option on the device it does not appear, the reason is that this function is still not updated on some. However, we can choose other methods that will also help us to do it.

Currently the easiest way to take advantage of this feature is by downloading external tools that you can find in the Play Store or App Store. It may be difficult for you when choosing the best one, but that is why we have compiled some of them for you, so that you can install the one you like the most.

Read moreHow to create a welcome and farewell message on Telegram to improve the user experience? Step by step guide

List of the best phone conversation recording apps on Android

There are people who prefer a thousand times to use email or instant messages as a means of communication, so that there is already a previous record of the conversation.

But like everything else, there are always others who prefer to talk over a call, because they consider it to be a more immediate method. Although taking a record is sometimes difficult, in this part you will find a directory with some platforms that can serve you when performing said action with your calls and video calls. CallRec is a platform that gives you two methods to use it, automatic mode and manual mode. With this you will be able to synchronize your recordings with Widget and Google Drive, so that you have them archived in a cloud. You can even configure it so that you receive notifications when a call recording begins and ends.

In addition to filtering recordings, either by number or by contact. Its disadvantage is that it does not work in all countries because some of them have legal restrictions when it comes to recording them. It works with various formats like AMR, MP4 and WAV. With this app you can record all the calls you want and choose which ones you like to save and/or share. Carrying out the process is very simple to do, in addition to the fact that at the time of executing it it tells you where the call is being made from, the type of telephony and other things, since incorporates a search system. It even allows you to set the time limit you want it to last.

In turn, you can synchronize them with Google Driver or Dropbox and store them in 3GPP and MP4 format. Best of all, it is completely free. If you want to record your voice calls or video calls, whether normal or from a social network, you can do so without any problem with this app. Not only can you record calls but you can also use it as a normal recordersince it will allow you to record any audio you want, such as a class, an interview, conferences and more.

It accepts you to save them in PCM or AAC format for higher quality and AMR to save space on the device. One of its biggest advantages is that you can use a Bluetooth microphone. In turn, users have the possibility to use it in the background and use it by controls through a widget from the home screen. You can find it in two ways, in its Premium or free version. Unlike other apps, the latter is very complete when it comes to recording conversations, in addition to having extensive configuration when storing it, you can choose some of the formats that she handles like MP3, WAV, MP4, 3GP and more.

It allows you to adjust it your way; you can choose if you want old recordings to be deletedif you want to record all the calls you receive, activate the option to ask if you want to archive, among other things. In Premium gives you other alternatives, such as uploading them to Google Driver or Dropbox. It should be noted that in both you can also do it with those calls you have for whatsapp or skype.

What are the best applications to record calls from your iPhone?

There are times when you can come to love record a call from iPhoneor you feel the need to do it and you don’t know how, or in some cases your mobile device doesn’t have such tools. One of the reasons why certain teams do not carry it is because in certain countries it is illegal.

However, as we said, developers have other options, you just have to knowing how to choose the best one for you.

It is one of the best applications to make recordings, because with it you can record not only your outgoing calls but also the incoming ones without any time limit.

All are safely stored in MP3 format and you can share them on some social networks, either Facebook, Twitter and WhatsAppor if you prefer to upload them to Google Drive or Dropbox. Although it has a paid version and a free version, the latter is not complete and has limitations when it comes to recording. This is one of the platforms with the most reputation among Apple users. With this you will be able to record your calls, but not only that, but also other types of audio that you want. To use it you must open an iPadio account, at the time you do so, one will be created on its official page ipadio.com. At first it can be a bit tedious and difficult to configure, since once this is done, you will have to call one of the local numbers on the interface and enter your PIN.

At the time of recording these will be merged, that is, both conversations will be saved and uploaded to the app’s cloud (your account). Notably allows you to record up to 60 minutes of high-quality audioplus they each come with their own selection of embed codes. this app allows you to record your calls with legal coverage and obtain the recordings with optimal quality. It has a legal security function, this means that the platform manages to obtain a certification of the conversations you have, integrates with the contacts of your mobile device, helps you locate people and saves their geographical position with the recording history. In turn, it gives you the option to store them in your email.