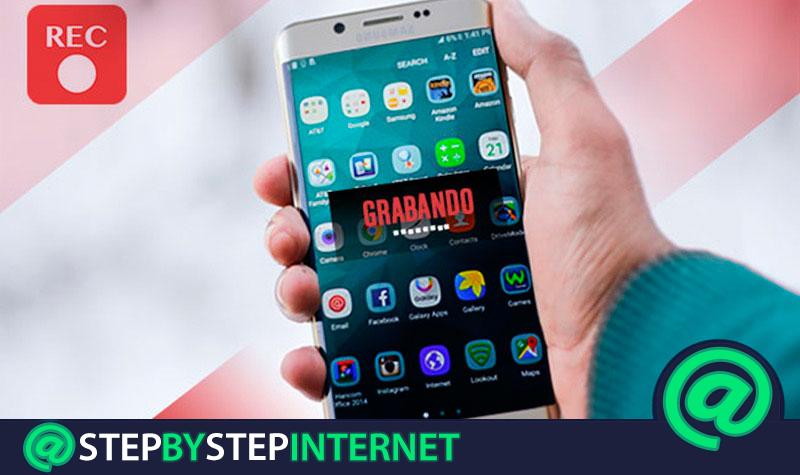 Applications that have the functionality of recording our mobile screens have gained importance in recent years . This is due to its great utility, which allows users to be able to make videos of everything that is displayed on the screens of their smartphones. Thanks to them you can get videos that are impossible to download.

These applications are many, and new ones are always being created that exceed their competition. Its main function is that the user has the facility to record what happens on the screen of his phone , and can use that recording for the purposes he wants, such as make some tutorial for Youtube, explain something to a friend or maybe make one of those famous gameplays that are currently so quoted.

In this article we present a list of the best applications to take and copy the screen of your Smartphone . You will know which are the most powerful and everything you need to know about their features, so you can choose the one that best suits your needs and get the best possible videos.

List of the best applications to record your Android screen

Android is the platform that offers the greatest alternatives when it comes to applications. In the Play Store you can find tools for what you want, including these apps to capture the screen of your mobile that are the best available today.

Read moreSecurity and privacy in Slack How to make your account much more private and secure? Step by step guide

This application has a not very complex interface which makes it stand out among other platforms , this is due to its easy use and simplicity when using it. It is capable of recording videos, audios, etc. It has a free version and a paid version depending on your needs as a consumer. In general it is a very complete and useful app for the user to make simple recordings.

It is an app used to perform the screenshot that allows you to obtain very good quality (Full HD or QHD) . It also has a feature that makes it much more striking and allows you to pause and resume recording at any time.

The app allows you to record audio with the microphone of your Smartphone, choose the visual quality of the video and other recording options that make it very striking if what you are looking for is quality for your recordings.

If what you want is to record the screen of your mobile to show the recordings of your video games. Game Screen Recorder is the best option for you, the way of using it is very simple which will allow you to get the most out of your recordings .

It has a high intelligence operating system that allows to identify all the games that are in your mobile device . Also with this app, you can record all your game sessions you want.

It also has a special feature, which allows you to create prologues to your favorite games by giving a touch of drama and dynamism to all your games , becoming the creator of your own virtual worlds. On the other hand, it has an integrated button that allows you to pause the recordings as many times as you prefer, letting you decide the rhythm in which you want to record all your adventures in the digital world.

This application was created so that you can save what we are seeing on our mobile screen in 720 HD or 480SD qualities . So you can record, the first thing you need is to touch the button that says transmit; then choose one of the two definitions mentioned, select the application or videogame you want to document in the video and finally edit the work.

Among its most important functions are: document everything that appears on the screen, get audio from the microphone, record your face simultaneously with the screen recording, add royalty-free music and publish the content Direct to YouTube .

It is characterized by being totally free , something that is currently very important for those of us who prefer to save money for other apps. In addition, does not weigh more than 5MB, which leaves us enough space on the device, which will give you more freedom to make longer footage.

DU Recorder allows you to record the screen with quality up to 1080P at a speed of 60FPS . Best of all, this application can record without time limits, something very important for many consumers. It also has other features such as: own editor which allows a lot of freedom when creating our content.

It is a free app that has no ads , which considerably improves the experience of those who use it. It has other important features such as: Video quality options (240p to 1080p). Let us record external audios to use in our screenshot from 64 kbps to 320 kbps . In addition it also allows us to record our video games in (Game Launcher) mode giving an appeal to people addicted to games.

ADV Screen Recorder has a wide variety of functions that make it a very practical application, among them are: You can record external audio for recording, it includes some features of visual effects (3 seconds count before starting to record) , does not have watermarks, something that sometimes obstructs the view of the visual material, allows us to add our own logo designs, etc. All these aspects make it a very complete application for anyone.

This app has features that place it in a good place among the applications we have mentioned. One of them is that allows screen recording at 1440p, with a frame rate of 25 FPS to 60 FPS. Another important thing is that it allows you to add Premium options for very cheap prices, something that should be taken advantage of.

It’s another screen recording application, with a resolution that goes from 360p to 720p , while the bit rate varies in a range of 2Mbps to 10Mbps . You can set up a 1 minute countdown to start capturing. It has a disadvantage that bring many of the apps that are free, which is that it brings ads that can easily be removed when you buy the paid version.

It’s one more application of this type, is super easy to use . It allows us to record anything on our phone to eliminate watermarks, it also has different video resolutions and many other features that make it very easy to use.

To end this list of applications we will talk about Super Screen Recorder, a very good Android screen capture , it comes with different options for anyone to use it and edit the videos they prefer.

An important part is that it has no time limit on recordings , a feature that many will appreciate and so no one will have to worry about the weather, it also has a wide range of video quality for different preferences and does not integrate watermark to our projects. In general, a very complete and well worked application to record our screen.