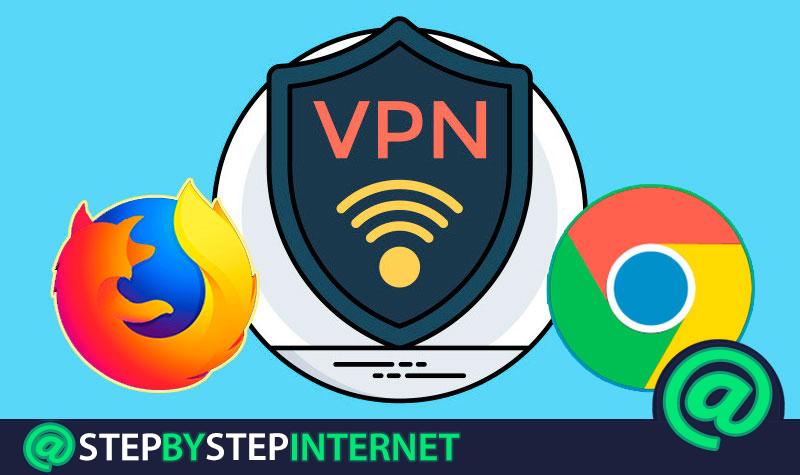 To surf the web with much more protection it is recommended that you experiment with installing a “VPN extension” , this being a private virtual network that assists you when you need privacy when connecting to a network public.

When installed, your connection will be encrypted, preventing anyone from knowing your IP address. In addition, you can also use in case you need to access the websites of a country where there are restrictions for some pages .

There are many types of VPN connections , so all you have to do is use the one you think gives you the best protection. Here are several options, which you can use with confidence in your browser Google Chrome .

What are the benefits of using a VPN to browse online the Google Chrome browser?

Users currently believe that browsing through the anonymous option of Google Chrome, Mozilla Firefox and other browsers is not a fully effective method, which is why more and more people are looking for the option of a VPN to connect securely.

When you use a VPN it is not necessary that the computers are connected to each other. Using this form of connection gives you endless benefits, within which you can find:

Operating through these extensions means that we can navigate with more protection, so we will also have a double function, because we will hide and, as stated above, our data will be secure before any unwanted breakthrough.

In this sense, the best options you have without a doubt are the following:

This product has many years in the market and can be obtained from the official website of Google Chrome. Through this VPN you can see restricted pages and its way of handling is very simple, since at downloading it, an icon is placed in the navigation bar that should only be clicked and choose the country to which you want to connect. It can be installed on Android.

You can download it for free using Google Chrome. This VPN has different servers that have no limit to be used or to download data. As in Unlimited Free VPN, you must click on the green icon that will appear in the browser bar , and thus access any country that has any blockage in its pages.

It can be downloaded from the official Google Chrome store. It is one of the newest VPNs, so it does not yet have a large number of users. It has an easy-to-use server with great speed and reliability . We can choose the location of the server we want to connect to and be able to activate the VPN. It is another option to avoid geographical blocking when surfing the net.

This VPN has a high level of security, since it protects the IP address, in addition to not allowing any type of advertising that may contain some kind of threat to your device. It can also be used to encrypt military information. It also offers the option of connecting six devices at the same time and allows the installation of apps and web extensions.

It is an extension that allows access to websites that are restricted and thus be able to navigate in a secure way and without any inconvenience. It is easily accessible and is used quickly as it is activated by simply clicking on its icon. In addition, is one of the best options to avoid all types of cyberattack, as well as to encrypt the connections of our servers and easily unlock the place we want to access.

ExpressVPN is one of the most used private virtual network services on the market. Its extension for Chrome and Mozilla is quite efficient, it does not have special functions as an ad blocker, but it is a perfect machinery without IP leaks and with one of the best browsing speeds.

This VPN is new, and yet it already has many users around the world given the security guarantees it offers with the incorporation of innovative tools for the service. It has compatibility with mobile devices with iOS and Android systems . We must also point out that it offers plans that have very competitive amounts compared to other VPNs for payment.

It offers affordable prices, but you only have the option of contracting for 1 year. Like any VPN, it can be installed in the browsers of the different devices or through an app. In case you want to use the free version, you should know that it only allows you to connect to countries like Holland , Canada, Czech Republic and France.

Goldenfrog is a company that gives the choice to use its VPN in a technical way, motivated to grant different choices for companies with fundamental or Premium packages. It is aimed at satisfying different needs of its users. It has about two hundred thousand IP addresses, which provides the option to download everything you want since you can choose the server you want to connect to .

It is a complete option, where the plan chosen is indifferent since up to 5 devices can be connected to several servers. It is able to make you choose between almost 300 different locations, which already gives an idea about the guarantees of anonymity that you acquire when using it. This VPN is compatible with Android, Windows and Linux .

It is a VPN of Swedish origin, where several devices can be connected at the same time so it is very much in demand by those who constantly work in the technological area. While keeping your information confidential, some users complain of lack of speed when they browse . But don’t worry, if you are not satisfied with the service you have the option to request a refund.

This VPN was designed by the Zend Guard company. Through it you will navigate safely both on the PC and on mobile devices. It can be used in Google Chrome, Firefox, Opera. Through this extension you can achieve the greatest possible protection, to complete your procedures freely . You can also access countless pages that are blocked, while your connection is encrypted.

On the other hand, this VPN hides your IP address so that you can be on the web anonymously, and you can also modify the address where you are at the moment you connect, because it has its 30 international servers available .

Thanks to the protection provided, nobody can steal your data or follow your movements. It offers great speed when downloading any file or application , also having a function called ‘Smart Price’, which allows access to online stores and see which has the best rate in the market .

It has around seven hundred servers and is one of the most used . It can be achieved in sixty countries and allows up to 5 devices to be connected simultaneously with just one account and with only one subscription. It is highly recommended to download P2P , motivated that you can browse anonymously with your IP address, by using an encryption under which it does not fully consume broadband at the time of downloading.

Your platform can be used at:

In case your expectations are not met when you use this VPN, you have seven days to request that your money be refunded. In addition, you can pay for the subscription through a traditional transfer or with bitcoins , at a cost of about $ 10 per month, $ 26.99 quarterly or $ 77.99 annually.

Provides a high level of security, having several important characteristics that have led it to be one of the preferred by users. Thanks to its identity-saving function, can be used in case you need to use military encryption to protect against people who steal information online .

It is not required to have any type of extension because it can be used with any type of program, including Android and iOS. It has an excellent blocker to avoid ads. It has a demo version, but with several options that cannot be used . Its paid version can be hired at around 49.92 euros per year in the Premium category, while the Premium Plus for about 79.92 euros per year.

It is mostly used in Hong Kong , having 256-bit encryption and has 500 servers that can be found in 140 countries. When using it, it does not save any information, but in some cases they have admitted that they have saved some connection records on their servers, as well as the broadband used.

They indicate that they have done so in order to improve and develop the function of their servers. It should be noted that it has its own DNS. It also has a split tunneling , which is used to routinely route certain applications to access the Internet when using a local connection or when connected to the VPN. Their prices are around € 10.40 per month, € 54 every 6 months and about € 70.8 for using it for 2 years.

Gestionar el consentimiento de las cookies
To provide the best experiences, we use technologies such as cookies to store and/or access information on your device. Consenting to these technologies will allow us to process data such as browsing behaviour or unique identifiers on this site. Not consenting, or withdrawing consent, may adversely affect certain features and functions.
Manage options Manage services Manage vendors Read more about these purposes
See preferences
{title} {title} {title}