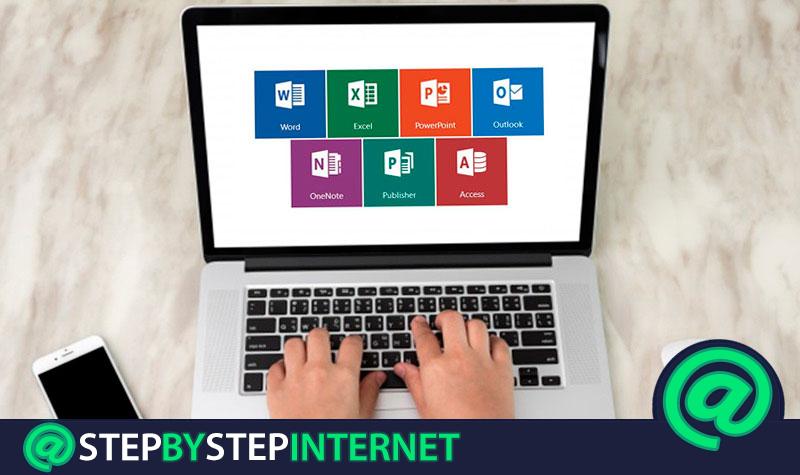 Over several decades, Microsoft Office has positioned itself as the largest market leader in office suites . This, mainly, because all its released versions have always shown the best in this area and thanks to this, the service is well above other options that provide similar assistance.

However, Microsoft Office costs a lot of money and today, it is presumed that it is abandoning local versions in favor of focusing on a purely subscription model that, Logically, it may be less attractive to the particular user.

Indeed, it is valuable to know and take into account other solutions that have similar characteristics to the famous Microsoft Office . Given that, although this service reveals a magnificent operation, it is not the only one that exists in the market. So, later we will introduce you to other alternatives to create documents, create large numerical accounts and much more.

What is it, what is it for and how does Microsoft Office work?

While it is true, Microsoft Office or “ MS Office ” refers to a software package that was created especially to carry out office activities and, therefore, integrates a set of applications that allow you to perform office tasks . These tasks give the possibility of automating and perfecting the usual desktop activities .

For its part, it should be noted that Microsoft Office was developed by Microsoft Corp . Being this, a company native to the United States that was founded in 1975. Also, the first version of the service and now, the oldest; was published in 1989 and only included two basic packages. The first one was made up of Microsoft Word, Microsoft Excel and Microsoft PowerPoint ; the other package added programs like Microsoft Access and Schedule Plus .

In this sense, both Word, Excel and PowerPoint are the most popular to date . Thus, Word consists of a word processor with many functions and fonts, Excel is made up of a spreadsheet that allows you to do arithmetic operations automatically and PowerPoint allows you to create and display visual presentations from the development of multimedia slides.

Among other details, it is valuable to mention that Microsoft Office is based on a licensed program . Which means that those who want to use it and take advantage of its benefits, must buy the service and added to it, respect the conditions of the contract. One of them and the most prominent, is the prohibition of making copies for profit .

Because this service dominates the office suite market, it reveals many advantages that are important to keep in mind when using any of its programs. Therefore, below, we detail the most distinguishable benefits around Microsoft Office :

In view of the fact that all services of this type may exhibit problems or points against them, Microsoft Office is no exception . In this regard, it is important to also know the disadvantages that exist around this service and these are:

As we indicated at the beginning of the post, it is essential to have other alternatives to Microsoft Office on hand for different reasons. Either by making use of a cheaper solution or better yet, a free program or, for operational reasons. As a result, we immediately announce 10 of the most optimal options to carry out desktop activities , whether on your Windows or Mac: 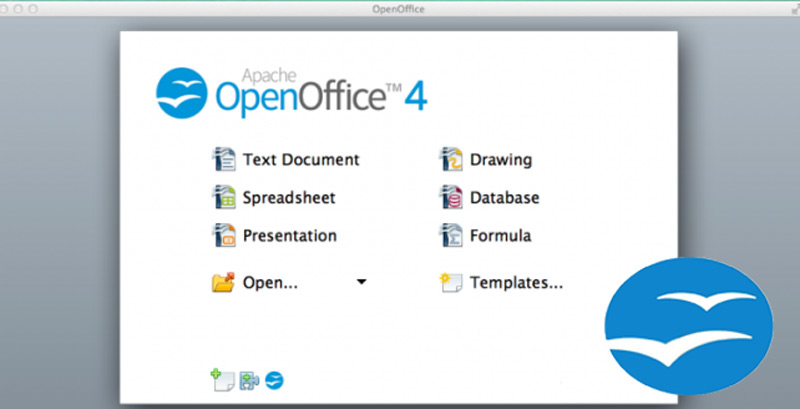 This service for many years was the great reference of free office suites. Thus, it is an open source software that, fortunately, can be downloaded for free from its official website and is based on four freedoms: To use it for any purpose , to modify it and match it to the needs of each user , to distribute copies and to handle it .

Also, is cross-platform (supports Windows, Linux, Mac OS X and Sun Solaris) and has a very common user interface. Display multi-language support (over 40) and enable file compatibility . In OpenOffice you can get: text document, spreadsheet, presentation, drawing, formula and database. 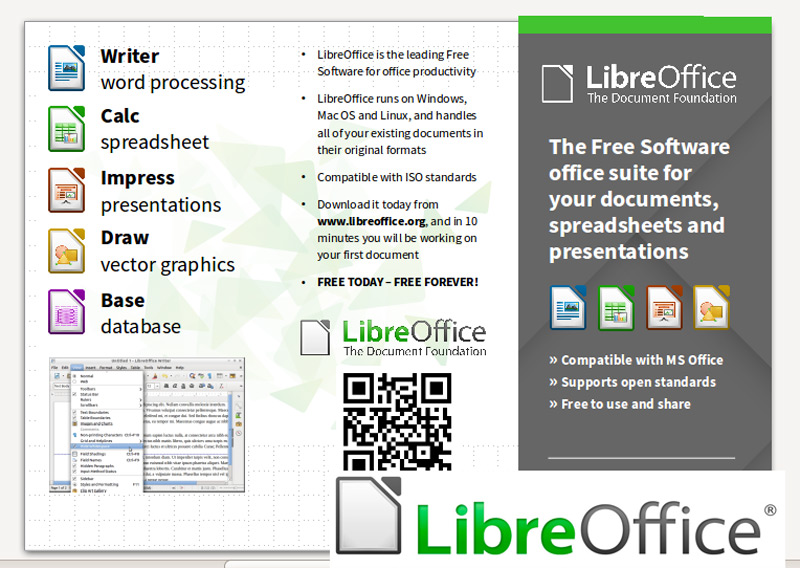 It is estimated as one of the most famous alternatives to Microsoft Office , mainly because it is a free and open source office software package, which was developed in 2010 by The Document Foundation . This, as fork of OpenOffice. In reference to its interface, is totally clean and adds powerful tools that stimulate your creativity day by day. In addition, increase productivity .

Among the main applications that it incorporates, we find “ Writer ” as the word processor, the spreadsheet identified as “ Calc ”, the presentation editor that call “ Impress “, the drawing app known as “ Draw “, the function “ Math ” to edit mathematical formulas and a base of data. In sum, LibreOffice is easily extensible from its powerful extension mechanism. 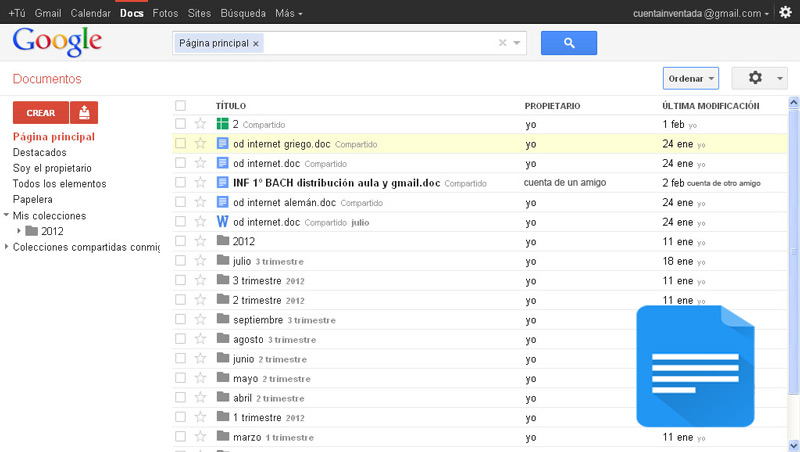 As the use of an office suite that works over the Internet can be a good alternative, Google Docs is a great solution for office activities. Starting because, it is available to millions of people thanks to the fact that the majority of users, have at least one Google account . Achieving this way, edit documents anywhere and even across multiple devices .

Thus, it offers a word processor, spreadsheet, presentations, web creation, survey software, map overlay editor, database administrator, code editor for the G-Apps Script language, etc. . To have a simple use of this tool, it is advisable to manage it through the Google Chrome web browser and the documents generated, uploaded or shared are saved in Google Drive . 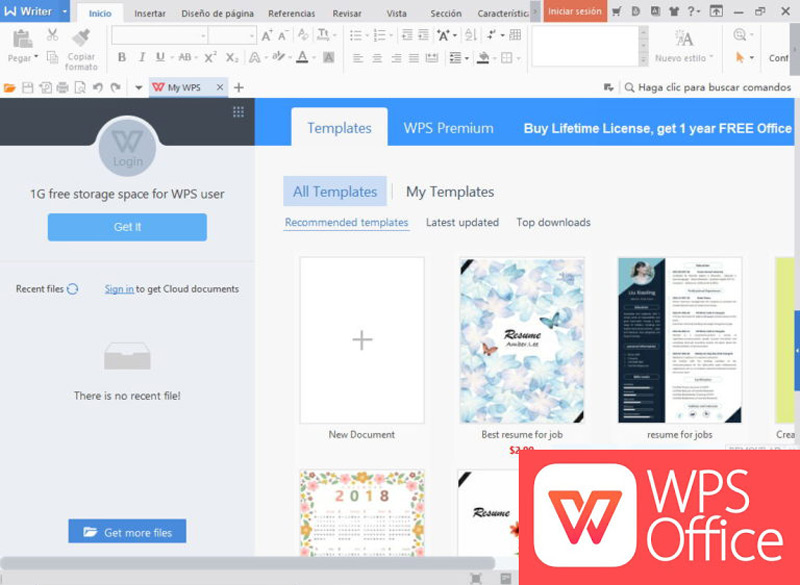 It presents support for Windows, Mac, Linux, Android and iOS, and it is one of the alternatives to Microsoft Office with better features . That way, WPS Office is completely free and a few years ago, it was known as Kingsoft Office . The first version of this software was published in 1988 and therefore, it can be considered an old and very veteran project in the field of office suites.

One of its greatest advantages is that supports documents very well under Microsoft formats , thus having the lead around OpenOffice and LibreOffice. However, among its main applications, the following stand out: word processor or Writer, slides and spreadsheets . This means that, unfortunately, it does not include software for data management or manipulation of vector graphics or mathematical formulas. On the other hand, it has a paid version that has more advanced features. 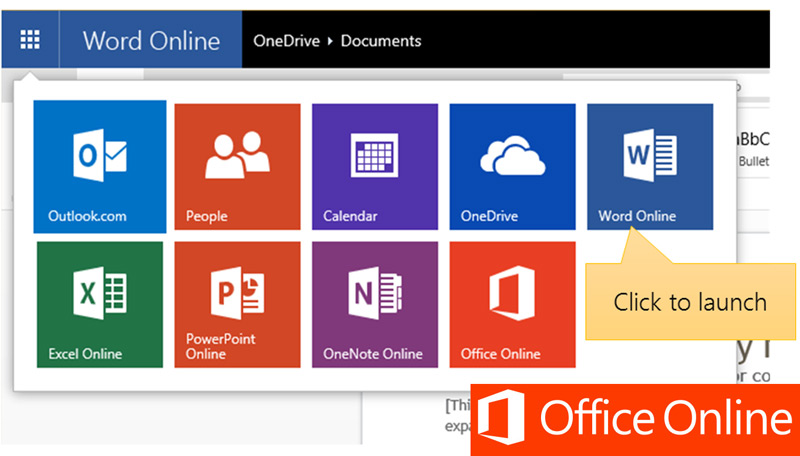 This is a free suite launched by Microsoft itself , in order to compete directly with Google Docs. Since, the success of the latter and the great power that free office suites have taken, have caused negative results for Microsoft Office. Thus, the support offered by Office Online is available in Spanish and contains all Office applications for free . Be it Word, Excel, PowerPoint, Outlook, OneNote, Contacts, Sway, etc.

For its part, Office Online works in the cloud and, in effect, partners with OneDrive to ensure complete assistance. Therefore, all documents that you handle will be automatically stored in OneDrive . Being able to enter them from any place and equipment. However, these apps are very limited , since the most relevant tools of each program are not available (it only makes it possible to read documents, modify some things and the option to share them). 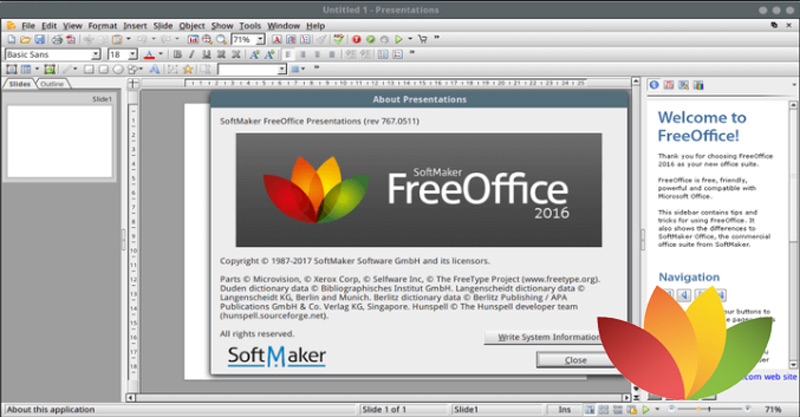 Free and available for Windows, Linux and Android , this alternative is an office suite that is based on SoftMaker Office technology. That is, it also integrates a paid version that includes other additional features. However, in reference to the free version, it presents applications such as a word processor or “ TextMaker “, presentations and spreadsheets or “ PlanMaker “.

For its part, FreeOffice contains a Ribbon-style graphical interface and best of all, is optimized for use on touch screens . Which, at present are the most used. In addition, the service provides support for more recent document formats from Microsoft (DOCX, XLSX, and PPTX) , and also manages its own. 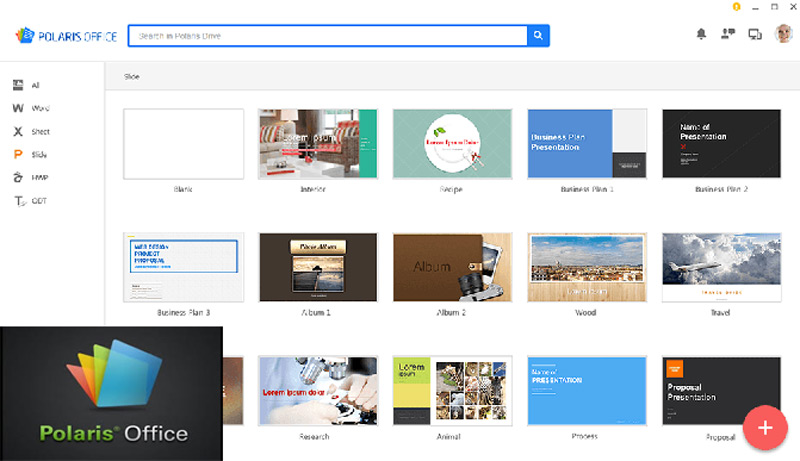 Another free alternative to Microsoft Office is Polaris Office, which has been designed primarily for users who prefer to manage their office work through their mobile phone or Tablet. Well, every now and then in when you can use it on your computer (contains version for Windows and Mac). Thus, it allows you to create, read and edit documents wherever you want . As for its free version, add absolute compatibility with office and offer all the essential tools.

In this sense, it contains a word processor, spreadsheet, presentations and a PDF editor . On the other hand, it has a paid version that focuses on collaboration and most of all, it is recommended to use it for commercial use. Which means that, in short, is a freemium solution . 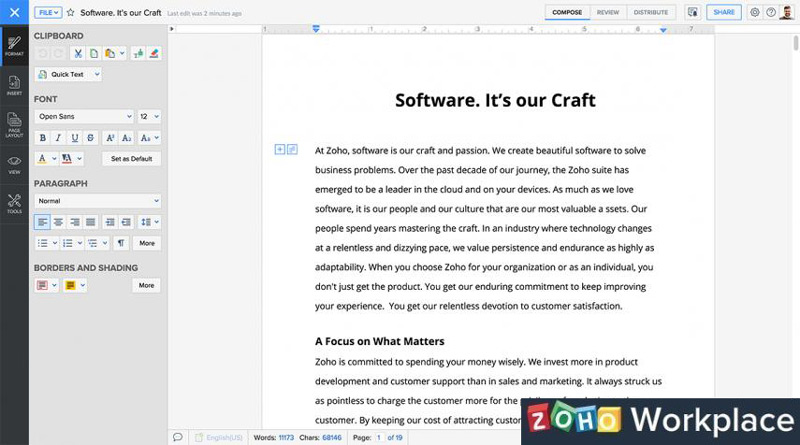 This service goes far beyond a free office suite. Since, it refers to a workplace in the cloud , which enables group work and provides additional tools to communicate with friends, colleagues, fellow students or a project. This, because adds an email manager and a chat . In sum, it provides a large number of mobile applications, with which you can access this virtual work site from any location .

Additionally, Zoho Workplace presents options for controlling slides , video streams and even organizing meetings of any kind. As well as all other options, this application facilitates word processor, spreadsheet and presentations. In addition, it can be ratified that exhibits an operation similar to Google Docs . 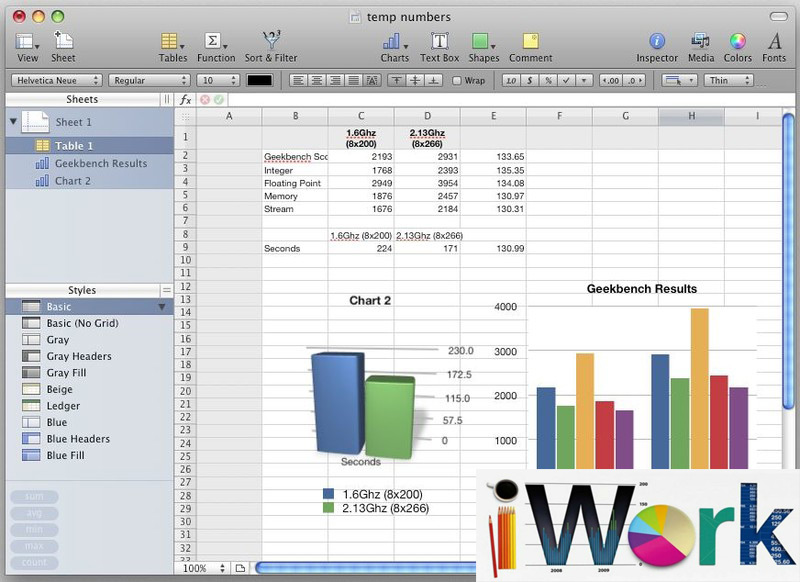 It is an alternative especially for Mac users . Which, was developed by Apple in order to provide high functionality around the import of files from Microsoft Office and also gives the facility to edit them in Pages, Numbers or Keynote. As for its operation, it should be noted that iWork is designed to work with iCloud and thanks to this, it is very easy to share documents in the cloud.

In that sense, it allows you to select a template and make use of tools to customize your documents . You can also add graphs, tables, images and categories based on any theme and, if that were not enough, simplifies the design of totally original devices with cinematic transitions.

To conclude, we announce this office package that is compatible with Windows, Mac OS X, Linux and FreeBSD . Thus, Calligra Office is based on an ideal solution for those users who handle this type of services for creative purposes . Since, it consists of a perfect program to design presentations and also includes a word processor and an application to create tables in the style of Excel .

Added to this, it presents distinctive elements of the other solutions and these focus on creative applications . Such as “ Krita ” which is a drawing program developed as main opponent of GIMP ; Krita adds various types of brush and has an interface that can be adapted to the editing window of the project you want, quickly. However, although Calligra Office has the ability to open Microsoft Office file formats, cannot save them .