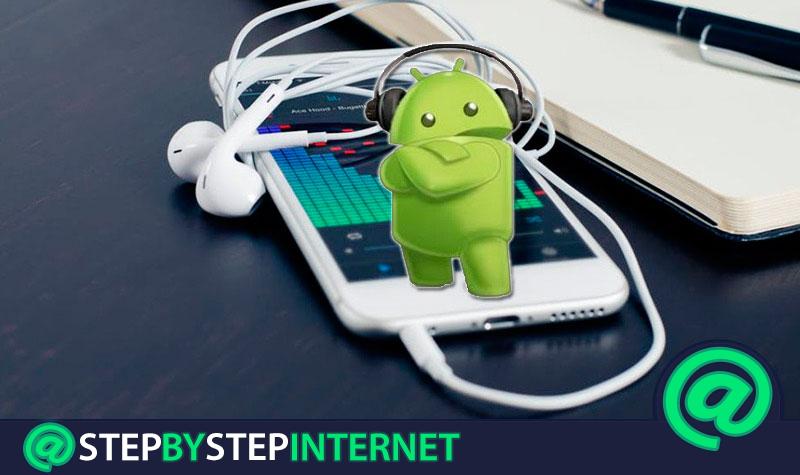 Many years ago, listening to music wherever you wanted, meant walking with the Discman or the famous MP3 players. But this has changed thanks to the appearance of the Smartphone , which offer various functionalities and among them, the ability to play high-fidelity audios . Especially, because listening to music is one of the most common tasks with these electronic devices , today. In addition, the more functions they offer to their users, they will be able to meet the requirements of many of them worldwide.

For its part, the best selection you can make to run a music player on your mobile, are those that you can use for free and without ads on Android , since otherwise, They cancel the sound quality. Thus, much more attractive to have music on the cell phone, wherever you are and enjoy absolutely the tracks you like the most.

Taking into account that it is much better to use applications that are specifically dedicated to it, than to use the mobile’s native music player. This, above all, because these programs ensure that the sound is of great quality . That is why, below, we provide a list of the best free music players and no advertising for Android phones . Which, were studied thoroughly and well qualified, to ensure the most optimal functions when it comes to sound.

After analyzing very well all the particularities of each music player that we present below, we can confirm that they are the ones that can offer you the best options on your Android mobile .

Taking into account from quality when emitting sounds, to its design and its different functionalities . Thus, we will announce the apps that you can use on your cell phone to play the music of your choice: 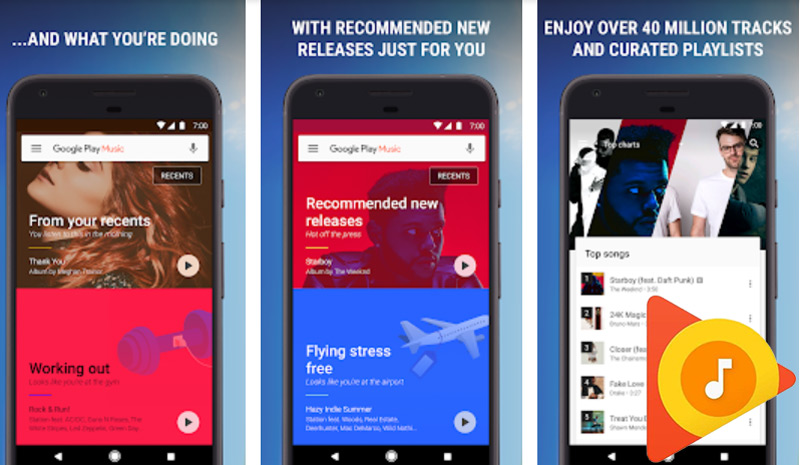 It is listed as one of the best players that you can download and install on Android, for various reasons. The first one and the most logical, is due to the rapport with this application , which makes it much faster and more convenient to handle .

Now, at the interface level, it is not the most notable but is simple to use . It is certainly not as complete as that of other music players for Android but similarly, fulfills its mission very well .

In addition, if you use Google Play Music exclusively locally, you will not have any inconvenience of advertising , so do not subscribe to the service. In short, it is a functional music player, which is not the prettiest in design or the most complete, but is one of the most famous alternatives for these mobiles .

This is one of the audio players preferred by many Android users, since it is minimalist with a Material Design design, which exhibits various functionalities .

Thus, as for its operation, once Shuttle Music Player has quickly scanned your mobile for music, has the ability to organize them into several categories >, thanks to the option of browse through folders . In addition, it offers other alternatives such as edit tags , send to a TV with Chromecast and many others.

This program has more than 6 equalizer bands for playback , as well as the functionality of supporting embedded lyrics, listening to music without pauses, downloading covers, listening to radio, timer, Widgets and themes for customize.

This is one of the most veteran programs of any ecosystem, which is compatible with Android 2.1 or later. . VLC Player is open source, with the ability to play any video and if you are looking for a music player, it also shows a good performance.

For its part, this player can play any multimedia format, it has an integrated library with optimal search functions , as well as selection of audio tracks and multiple subtitles. As if that were not enough, it presents support for streaming over the network, adding HLS . 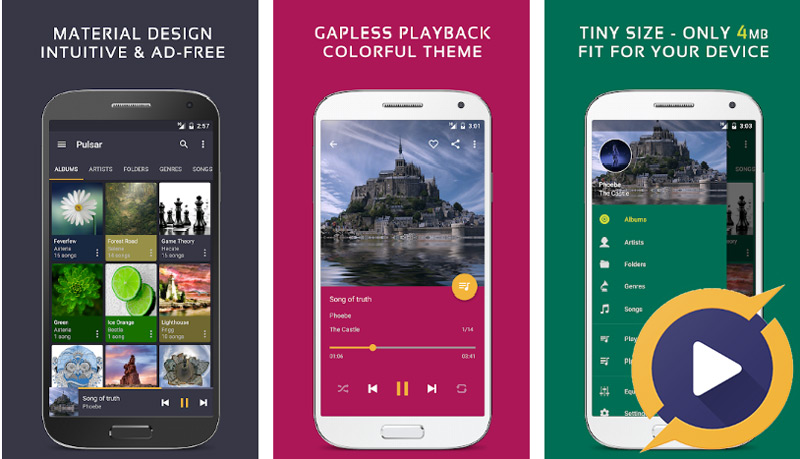 This is one of the best free music players for Android and without ads, which has excellent features and a minimalist design . In addition, it offers a quick search engine with filters by criteria , it can be played from the lock screen and exclude folders to prevent it from scanning audios from other applications, such as WhatsApp.

Added to this, Press Music Player displays an interface with lines of Design material organized by tabs, whether for albums, folders, genres and songs. And from the playback interface, it is possible to change the playback speed , include a Playlist list, set as a tone, edit tags and also has a stop time. 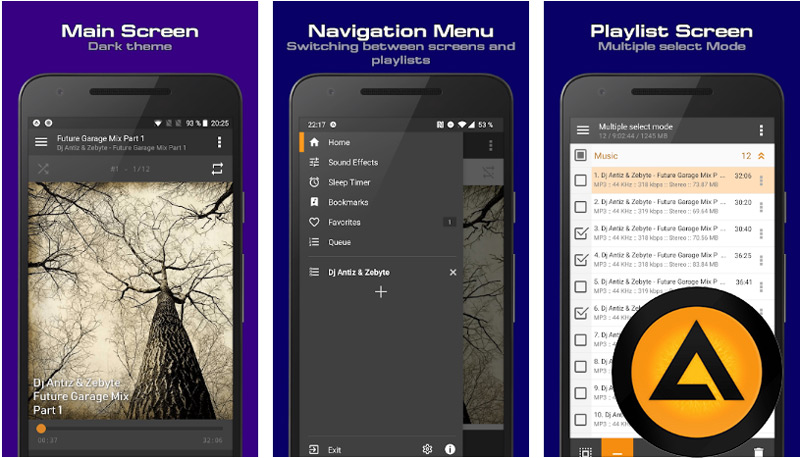 This is an audio player with limited resources, that is, for low and medium ranges . Although these types of applications are not very heavy, they are also ready to work on very low power terminals .

As if that were not enough, the application is compatible with virtually all audio formats and has a 10-band equalizer to adjust the music as you prefer. In addition, AIMP, has a support for the covers of the discs, ability to place markers on the audio itself and smart lists . As for its interface, it is acceptable and has several very comfortable widgets to use on the home screen of your mobile .

As a curious fact, we tell you that the developers of this app, keep it constantly updated , so it is something that is valued absolutely well. And in short, it is a player that can be classified as lightweight and distinguished by consuming few resources . 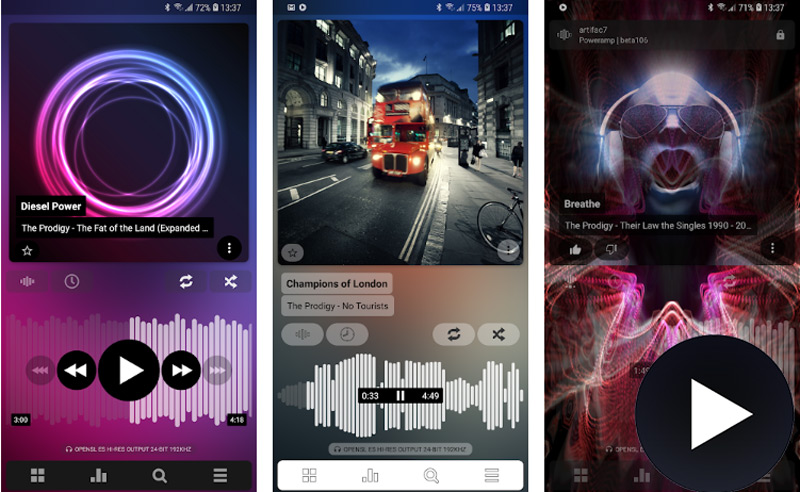 Although it is one of the most complex . In reference to its interface, it is not the most attractive or pretend to be the most intuitive player for Android.

For its part, Poweramp is presented as an excellent option for the most audiophiles , that is, for those people who show a special interest in the reproduction and audio recording systems. Since, it allows them to adjust each parameter of the pitas with a complete equalizer and aspects such as the audio output itself to be able to control the distortion . Indeed, if you are looking for a very complete and efficient audio player, this is the one you need.

In addition to this, the player gives you the ability to add plungis to see the lyrics of the song while you are playing it, for example. Taking into account that it is software that has almost 5 years in operation and its experience is noticeable if you use it day by day. The best thing is that you have a completely free version .

If you are an Android user who looks much more at the design of an app than in any other aspect, to decide whether to use it or not; Phonograph is the most attractive audio player and quite advantageous. It can be ratified that its design is extremely spectacular, in addition to 100% integrated with the Material Design lines imposed by the renowned Google and also with a very well maintained interface . < / p>

In this sense, the operation of the application is clearly simple and allows you to play different lists of songs, in addition to synchronize the software with Last.FM , among other alternatives.

On the other hand, Phonograph is totally dynamic , so the colors of the UI are changed automatically, depending on the type of content you play .

In short, this music player is one of the most complete options for your mobile device. Which is focused basically on good design and optimal functionality , in addition to being totally free and without ads . 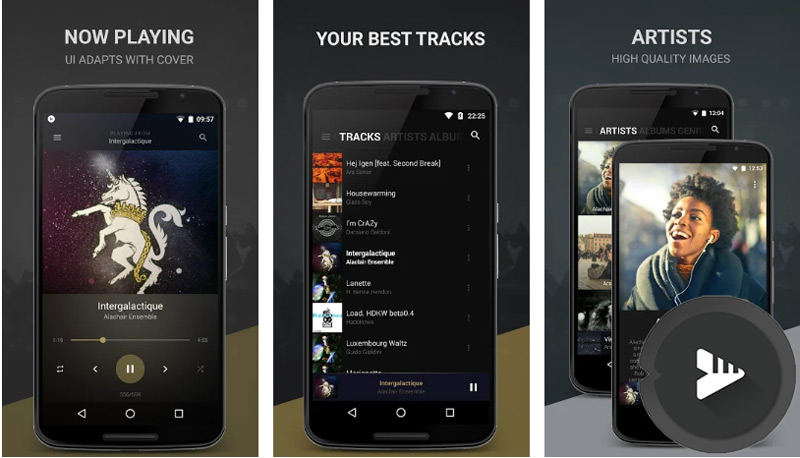 This is an alternative similar to Poweramp. This free music player for Android, provides great aesthetics, excellent audio engine and folder preview.

In short, BlackPlayer EX has a player for locally stored music files, such as MP3, FLAC and WAV. It also has an equalizer, BassBoost, Virtualizer, Left / Right Balance, non-stop playback, tag editor and 3D transition effects . Like 3 widgets, the clear lyrics display and a editing tool . It also has a timer, weekly most played tracks, and source and interchangeable tracks .

As for its additional features, it holds 6 sources, including the option to use the system font . Added to this, 11 color accents, 8 additional themes, white widget, customizable crossfading and the screen option always on.

You also need to emphasize your ability to customize library pages (add, delete and sort), a blacklist of songs and folders , a widget in a floating window, in addition to playing random tracks for 5 seconds each , as a test tool.

Without leaving out, customizable widget and notification, see artists in large grid, see genres in list, modify the background text color and notification , has two additional text animations, an effect additional transition as well and the option to hide any of the pages .