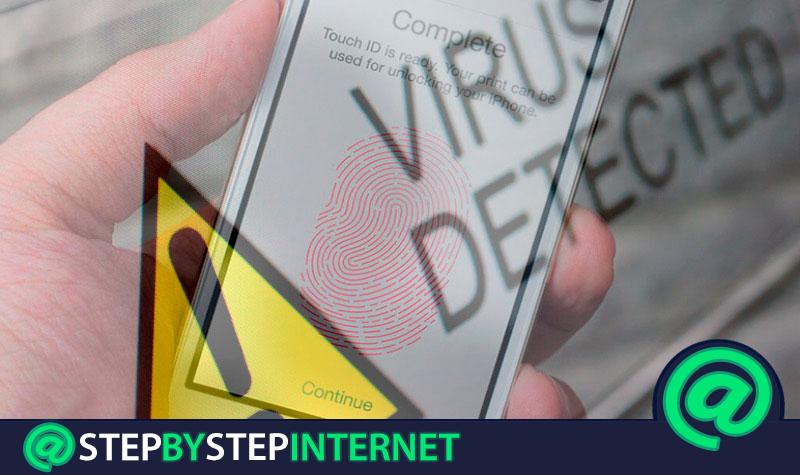 iOS mobile devices are characterized by being much safer than Android devices . However, this does not make them immune to virus and malware attacks. Therefore, every time surfs the web , an application is downloaded or performed any activity on the network there is a danger of being infected by some malicious software.

With this in mind, it is important to take precautions since there is no probability that we are except 100%. For this there are some antivirus applications that are they will be in charge of controlling all these malicious softwares and at the same time increase the protection and security in the terminal .

Therefore, in order to ensure completely secure protection at all times, especially when you are connected to the Internet , it is best to use some of these apps According to this, here we are going to show you which are the best of them currently.

Why is there no antivirus in the Apple Store?

Apple’s operating system has decided not to have any type of antivirus application in its App Store virtual store . This is mainly due to the fact that this system does not need any of these apps, since it alone is capable of providing completely guaranteed and secure protection , or at least it has done so Know all your users.

Because of this, the developer of VirusBarrier, and other companies that also offered their services in the App Store have removed their application arguing that Apple’s description was little clarification . Because of this, there is still doubt whether Apple is right or not with its new strategy.

While it is true, iOS devices have presented some threat problems in recent times, but although it is known, this has happened only with those users who have applied the jailbreak on your system .

Therefore, those users who maintain the originality of their equipment and only make use of the official apps continue to have maximum security and protection . However, many experts presume that this strategy could end with a failure .

According to all this, you will be wondering What do these applications do? Many of the users have come to qualify them as false. However, they they can contain security features that are still allowed and that can be very useful, such as phishing protection, VPN, online tracking, password managers, anti-theft solutions or security locks advertising.

All of them are useful for the security of a device, but they are still not considered antivirus.

With this in mind, and knowing that the iPhone provide many security measures , this does not imply that is less vulnerable to cyber attacks . If we take into account the latest studies conducted the iOS system only 4 vulnerabilities less than the Android operating system , so the difference has really been very little.

These vulnerabilities are product code failures , which are exploited by the attackers to compromise user security . Therefore, although these apps are no longer an antivirus itself, it is advisable to use them, since despite this they still offer some security measures that could help protect privacy at any time and smartphone security .

In general, we have all heard that iOS devices are completely secure and do not need any program to increase security against viruses and malware . However, it is never too much to have a tool that helps to reinforce all this, especially today when the occurrences of malicious software and information theft have become more frequent.

But, we must also take into account everything mentioned above, and that is that none of these applications acts as a real antivirus, even though they express it. But, if they are able to carry out other security functions out.

With this in mind, here we explain the best app apps that can strengthen the security of your iPhone or iPad device:

McAfee is an application well known worldwide for its excellent performance in terms of protection . It is completely free for both iPhone or iPad devices , where it offers a lot of very interesting features for its users.

It is important to mention that this free version offers advertisements , to eliminate them you will need to use the premium version .

It should also be mentioned that it offers a large number of functions to avoid the presence of threats , as well as the possibility of slowing down the computer constantly.

Among some of the features it offers are the following: 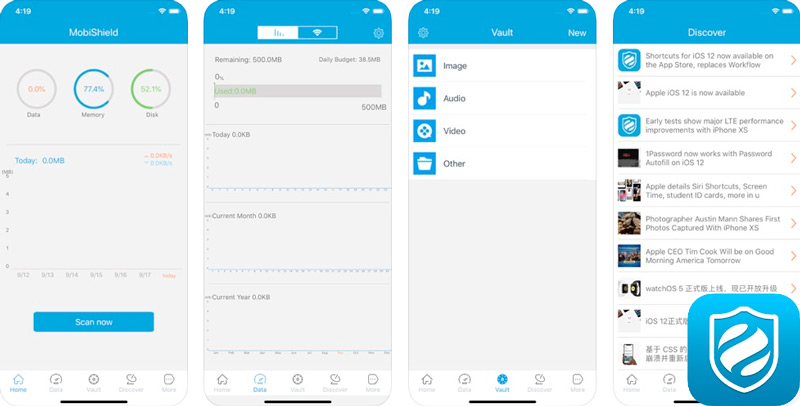 Previously this program was only paid, but nowadays all this has changed and can be found completely free. MobiShield is one of the applications that has more additional options compared to other programs of this type. Ideal for monitoring all system resources , thus avoiding the presence of any type of threat.

Therefore, this app has become one of the best options for iPhone users , a way to track the entire operation of the equipment, the operation of the battery, the use of data , among others. In addition, it has a file encryption system that only very few programs offer.

Here are the main features of MobiShield: 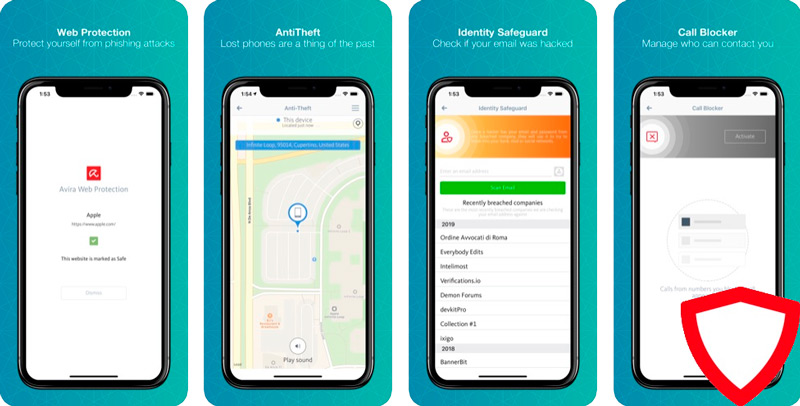 Avira is known to all as one of the best antivirus applications for the iOS operating system . However, with the latest measures taken by Apple , it no longer works directly as an antivirus, but still provides other protection tools for its users < / strong>. It does not offer any premium version and is very broad in features with very good performance.

It has long been considered as one of the best apps for iPhone devices , where it is able to cover almost all basic user needs. In addition , it has a very well developed interface which facilitates its use.

Among its main features we can find the following: 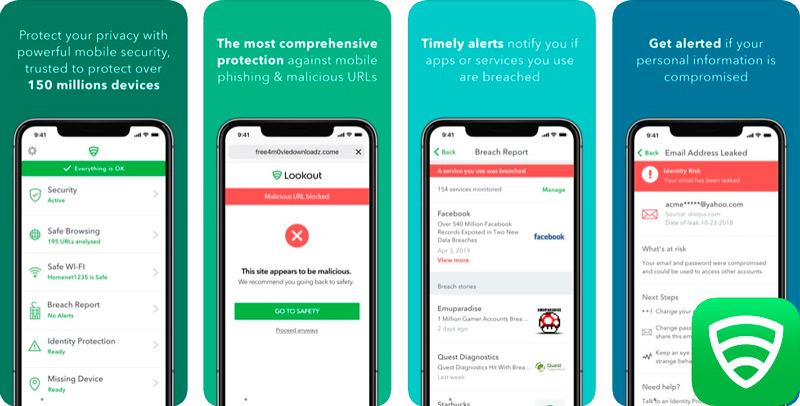 A tool that is still available on iOS and is ideal to avoid what is identity theft . To do this, it offers a security and identity protection system that is very advanced and efficient, avoiding putting any type of personal information of the user at risk. Lookout has a free version and a premium version where you will find more advanced features and features in the protection area.

In the case of the free version it is important that the app is always kept up to date, this will allow you to have the necessary tools to perform the data protection of the equipment . Previously Lookout worked as an antivirus in the iOS operating system , but is currently used as an app for data protection .

With this in mind, here we mention its main features: 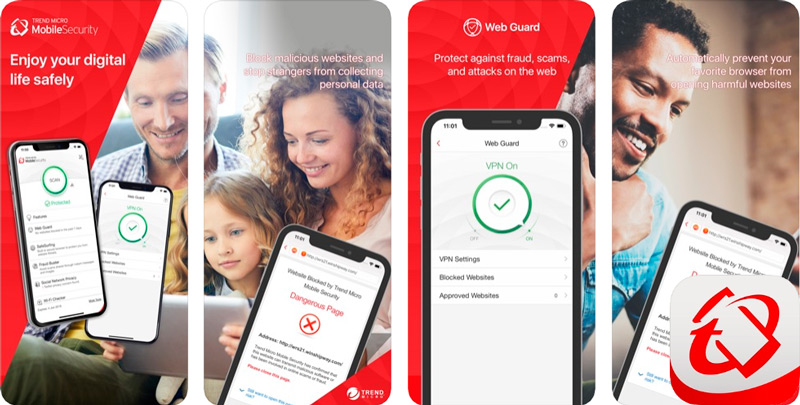 Previously it also worked as an antivirus for iPhone devices. However, today it is used as one more protection tool for the mobile system, avoiding that you have risks when surfing the Internet.

This is how most of the functions offered are intended for what is browsing security in the Safari browser . Therefore, it becomes a very good option to navigate safely from your mobile.

In addition, it offers some very interesting features which we mention below:

Security in iOS How to keep our iPhone safe without antivirus?

As we saw earlier in the post, antivirus have ceased to exist for the iOS operating system. This is because Apple has designed a very secure kernel for devices iOS, preventing them from being infected by some type of malicious software.

However, we cannot fully assure that this is a completely secure system , although there are still no known events where some of these computers have been infected .

It’s important to keep in mind that cybercriminals always get a way to violate security systems , or try to fool Apple security personnel , who are responsible for reviewing each of the applications.

Taking into account all the dangers that we can acquire at the time of surfing the Internet or downloading an app , it would be good to be able to use an antivirus that will analyze each of These movements, but unfortunately those have ceased to exist for this operating system. Fortunately for users, malwares are not very common at the moment , so the chances of being affected are very small.

Therefore, the iOS system has the necessary tools to take care of itself, preventing users from reaching failures or problems with the operation of the smartphone . However, despite being very safe, here are some recommendations so you can keep your iPhone safe and free from viruses or any other type of threats:

Is an anti-malware really necessary for iOS mobile devices and Android?

It is important to keep in mind that today it is not only viruses that can affect the operating system of a specific device, but there are also other elements such as malware, phishing, spam, identity theft, data interception on the network, spyware , among many others. Therefore, it is important that each user has caution when surfing the internet.

For this it is important to take into account what are the rules or the regulation for cybersecurity , as this will help to maintain the security of the equipment and at the same time reduce the risk of being infected .

Some of the rules that we must take into account are the following:

It is also important that you make use of a security application found in the App Store . As we mentioned earlier in the post, these apps are no longer antivirus , but it has some security tools that will help you get more support at any time of irregularity.

In general, these security applications, as they are now known, offer functions such as the VPN , notify when an irregularity occurs in the system , act against phishing and malwares , have an encryption system, advanced parental control , among many other features that will help you further protect your iPhone device. < / p>