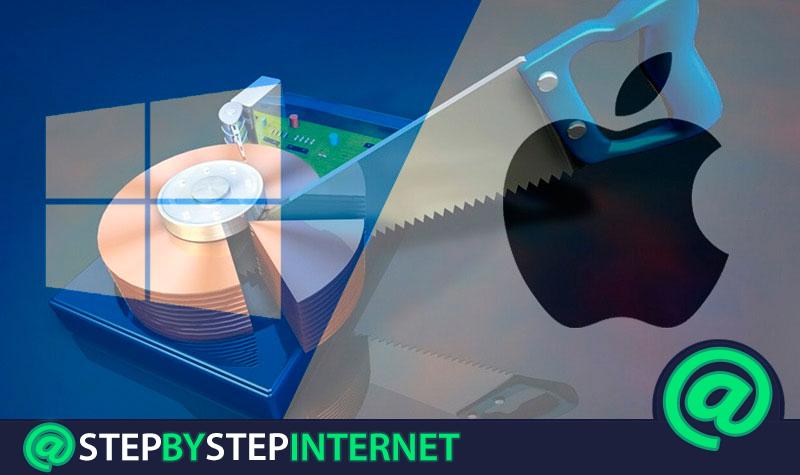 At some point, anyone has faced the situation of having to “partition” the hard drive of their computer . If you don’t know specifically, a partition refers to a division that is located in a single physical storage unit . Which means that owning several partitions is synonymous with holding several hard drives but on a single physical hard drive , either each with its file system and thus, they work differently.

This is usually done to add data based on categories , that is, to keep your work folders in one partition, multimedia files in a different one and also, programs can be installed in the system unit. Even disk partitions are also used to start from scratch with the operating system you are using and for those advanced users, make a hole for another operating system, in order to run double or triple boot on several operating systems , since this is impossible without dividing your HDD or SSD.

Indeed, composing your hard drive partitions in an efficient way is an extremely significant point on your computer. Thus, if you want to have a professional tool to manage (create, delete, format, resize, hide, etc.) without data loss and securely , You can make use of the best partition management software that exists today. That is why, from this post we want to let you know the programs with the most optimal functions to perform hard disk partitions , in both Windows and Mac .

In order to use a fully qualified program to make hard disk partitions on your computer and make them completely effective, we have prepared a count of the best software or tools that you can use for it . Thus, we indicate the most relevant particularities of each of these, below: 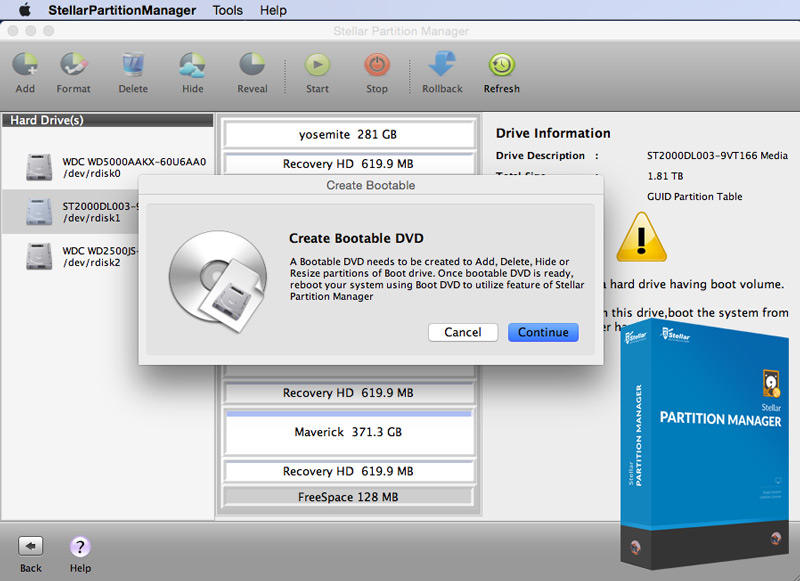 This is a program only available on MacOS X that allows all users to create and modify partition size on their Macintosh HD computers . In addition to this, with Stellar Partition Manager it is possible to create a bootable USB for the creation , elimination or resizing of this depending on a volume of boot.

Taking into account that in addition to the startup disk, this software allows you to carry out all the actions of divisions on an SSD or external hard drive .

For its part, among other notable features of this division management program, we highlight that gives the necessary tools to create a completely new Mac partition . Likewise, it is able to vary the size of the NTFS part in the external unit, resize and optimize the free space in MacOS HD, as well as resize or eliminate any existing ones. As for compatible file systems, they are HFS, NTFS, FAT and ex-FAT . 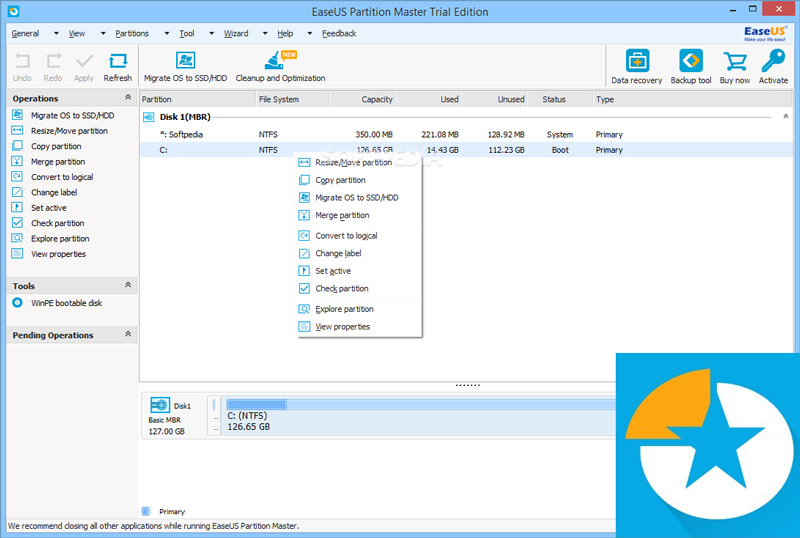 Second, we recommend this software that only supports Windows Server and has two versions; one free and the other is a PRO version that costs $ 39.99 and allows you to migrate your operating system to a new hard drive or SSD. Now, referring in general to this program and distinguishing the most beneficial features of its free version .

It has several options through which you can create, format, resize, move, divide, combine, copy, clean, verify and explore, very easily. Also emphasizing that, supports a maximum size of 8 terabyte of hard disk .

In this sense, EaseUS Partition Master has tools that have the ability to recover lost or deleted partitions , it displays a command line and alternatives to convert MBR systems to GPT . In addition to this, it is for business use and shows a graphical user interface to be completely intuitive . It also allows you FAT to NTFS transformations , primary to logical and vice versa. 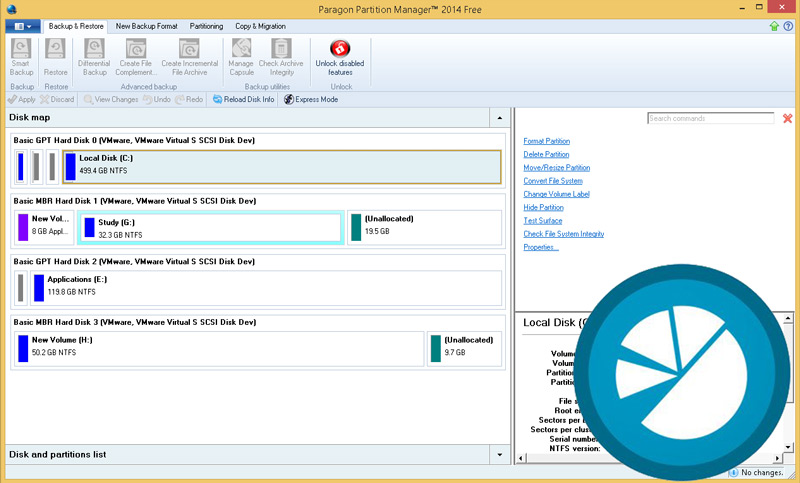 Another free and specialized hard disk partition management program is Paragon Partition Manager that provides support for several versions of Windows , from Windows XP to Windows 8 As with FAT, FAT32 and NTFS files, in addition to the Apple HFS + maker.

Additionally, is an intelligent and reliable assistant that distributes, in the best way, the additional memory by simply sliding, zooming in and out of the partitions made. That way, it allows you to organize and optimize your hard drive with the creation dialogs , magnitude , format and removal of these .

For its part, it is estimated as an excellent file transfer assistant that exports different folders and important documents from one division to another local drive or even, you can burn them to a compact hard disk for emergencies . In reference to its interface, it is easy to use and very intuitive with predefined views. In addition, supports hardware and software in general , GPT / UEFI configuration and convert HFS volumes to NTFS and in the opposite direction without reformatting . 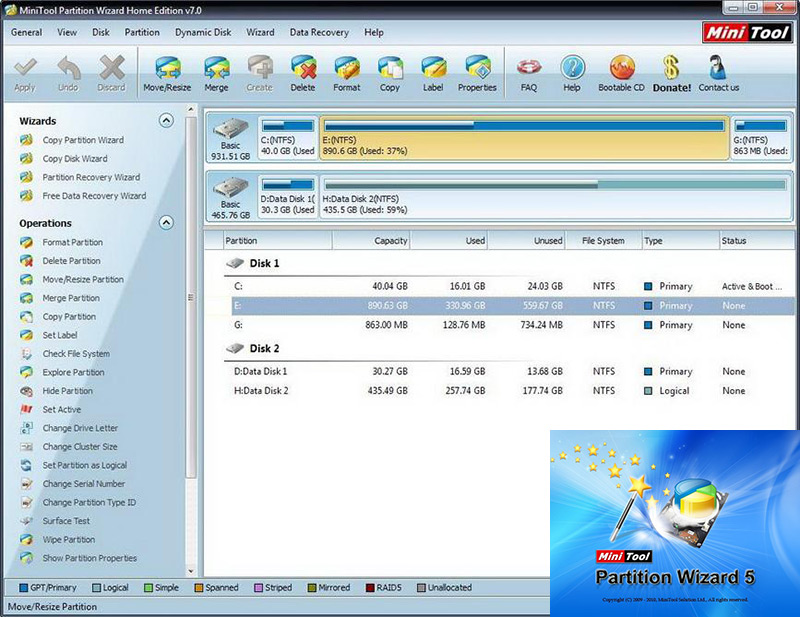 It is a program with a free version and a paid version , which adds excellent functionality to create and manage disk divisions on the computer . It is compatible with Windows versions from XP to Windows 8 and has extremely advanced tools .

Since in addition to creating, editing, formatting and deleting, you can migrate the operating system to another HDD or SDD disk (totally free). You can also correct problems in the Master Boot Record or MBR and retrieve all the information from previous ones.

On the other hand, this program allows to align SSD partitions , verify the file system thoroughly, clone the disk and convert MBR to GTP >. Therefore, it is considered the administrator with the best qualities and the most recognized, by including so many advanced functions and offering it for free. The most advantageous of this is that thanks to its extremely simple interface to use , can be used by any user who does not have professional knowledge in the subject .

Another great alternative for MacOs users is iPartition, which is estimated as a completely complete tool for working with disk partitions on computers . Since, first of all, it exhibits undoubtedly efficient performance in terms of tasks related to hard disk partitions , thus allowing to create, resize and delete any of these belonging to a Mac or even to any PC because it has remarkable compatibility (it also supports Windows).

In short, iPartition has the ability to resize BootCamp volumes , preventing any damage around boot up.

In addition to this, this software supports file systems such as NTFS, HFS and FAR. In reference to HFS, it manages to transform one where the file system stands out from uppercase and lowercase to a normal one. Also, issues cast without reformatting and smart operations for Mac drive .

It is an open source and powerful program, which exhibits compatibility with both Windows and MacOS X , in addition to Linux. Thus, it allows all its users to create, delete, move, copy and modify the size of the divisions on a hard disk.

Added to this, supports multiple file systems , among which ext2, ext3 and ext4 stand out along with NTFS, FAT16 and FAT32. Taking into account that it is one of the most popular software worldwide to perform this type of actions on computers .

It also gives the option of creating a table and activating or deactivating partition indications As a curious fact, to install this program on Windows or MacOS X, you must use a tool or rather, a version known as “ GParted Live ” that you must download in ISO to enter it on a CD or USB . Now, in terms of its user interface, may seem very complicated at first and consequently, many inexperienced choose not to use GParted and turn to another application of this type. 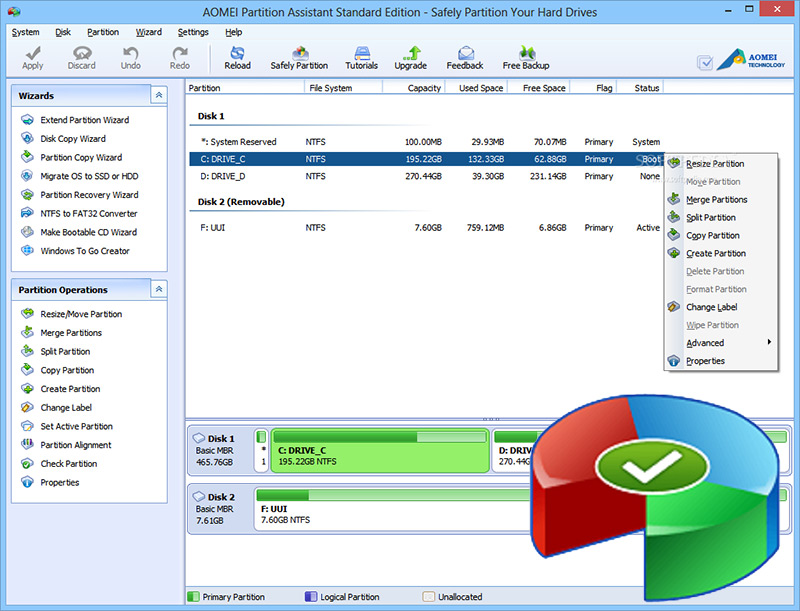 It is an ideal solution for the latest versions of the Windows operating system and in short, it supports the most famous file systems such as FAT32, NTF, EXT2, EXT3, etc. From this highly qualified partition manager, you can make use of basic and somewhat advanced functions , to perform all the operations you need around hard disk divisions, either create boot drives, convert MBR format partitions to GPT and copy them.

All this, without the danger of losing the data stored there.

Although it is a basic option for managing disk partitions on a computer, is recommended by experts thanks to its smooth operation . To start, Wondershare Disk Manager is only compatible with Windows XP, Vista and Windows 7. As for its interface, this program presents a very simple and lightweight platform , which does not It has no complication of use.

In this sense, it is an application that can be considered powerful to create, format, delete, resize, create copies and perform other operations of interest on a computer’s hard drives . Thus, it shows two modes of use (“ Wizard ” and “ Expert “) and its main functions can be summarized in three buttons “ Create Partition ”,“ Delete Partition ”and “ Resize Partition ”.

Which allow various actions that you can handle with great simplicity. Either install a new operating system, increase or decrease the space of a particular partition of the program, among others. 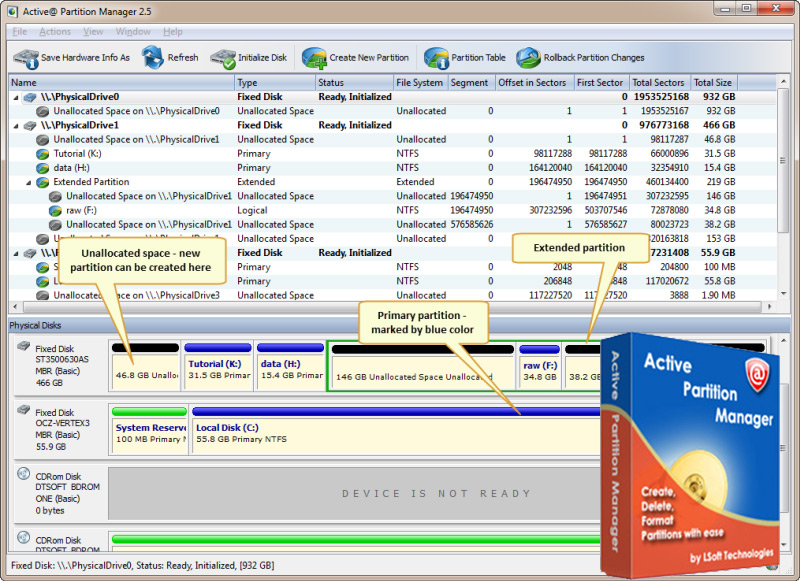 To conclude, we recommend this hard disk division manager that accepts Windows 2003, 2008, 2012 and 2016 servers, as well as Windows Vista, XP, 7, 8 and 10. Although it is not the most complete program of all The listing is a good option to use, in view of that recognizes volumes of formatted partitions , it has the ability to create a logical drive , easily edits and synchronizes FAT boot sectors and convert MBR to GPT or GPT to MBR.

Additionally, Active @ Partition Manager allows you to undo changes in partition design, you can format a flash memory such as NTFS and create FAT32 partitions larger than 32 GB in size and even up to 1 TB . On the other hand, it assigns and changes the attributes, it allows you to see advanced properties and attributes of a partition and also, it has the ability to create several of these in a USB flash memory device.

From each of the programs detailed in this post, you will be able to carry out highly effective divisions on your computer. Simply, you must choose the one that best suits your requirements or you find the most optimal option to use and download it to your device through each of its official pages .