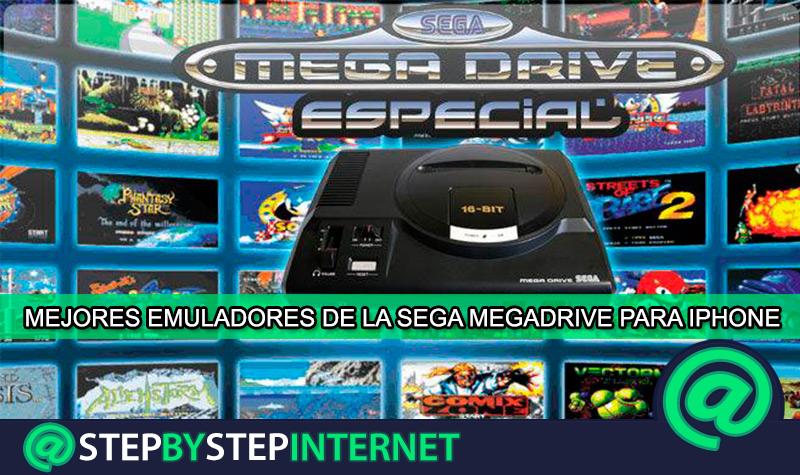 UPDATED ✅ Want to turn your iPhone into a Sega Megadrive console? ⭐ ENTER HERE ⭐ and Meet the Best Emulators ⭐

Today mobile devices are widely used to run different types of games, this thanks to the powerful functions they offer. However, most of the games that are available are modern, but there are some options that will allow you to replay the classic games of the past.

So, if you are a game lover the Megadrive or Genesis console as it is also known, you will be able to make use of some available emulators that will allow you to enjoy each of these games.

That is why we are going to show you a list of The best Sega Megadrive emulators for iPhone. To do this, follow in detail everything that we will teach you throughout the post.

What features are ideal for emulating the Sega Megadrive on iPhone? Before installing any emulator of video games on your smartphone, it is important to know that features are ideal for executing this type of program. This will let you know if you iPhone device It has the necessary requirements to use it as a video game console.

That is why below we show you the minimum requirements to install a Sega Megadrive emulator:

If your mobile device has these two requirementsthen you will be able to install any emulator of the sega megadrive. As they are classic games, the requirements for their execution are usually very minimal, so it can be installed in any mid-range and high-end iPhone device Very easily.

Keep in mind that the options Sega Megadrive console emulators to play on iPhone are very limited, so currently you can find very few programs available for it and that offer you a good service.

Therefore, here we show you a list of the best emulators for iPhone: It is one of the best emulators of the Sega Genesis, Super Nintendo, Master System and Game Gear and that is mainly characterized by its ease of use. In addition, its download is very simple so you can quickly start using it on your iPhone mobile.

It also offers you a game library already integrated into your system as well as the possibility of add new roms from safari. However, to make use of this emulator your device must have install iOS 7 through iOS 8.1 and be the iPhone 5 or higher so that it can be executed correctly. Access this emulator from its GitHub: https://github.com/Provenance-Emu/Provenance. Another option available to be able to playing Sega Megadrive games on iPhone is RetroArchone of the most popular emulators on the market and which is characterized by being multiplatform, that is, it has a large number of independent cores from different video consoles.

RetroArch It has an emulator known as Genesis Plus DX and which is one of the most popular when it comes to emulating this video game console and that you will only find within this program. So you can start taking full advantage of this open source emulation software. It is an emulator with little time in the market and that is responsible for emulate 90s games. It has been created as a new alternative for iPhone users and that basically presents the same idea to that of the MAME emulator.

The best of all is that it has a great compatibility with the existing roms of the Sega-Genesis so the game options are quite wide. In addition, it allows you to save each of your games as well as set the sound and many other options available for you to enhance your gaming experience.

The best Megadrive games to play on your iPhone

If you want to get the most out of your sega megadrive emulatorthen it is essential that have the best games.

That is why we are going to show you a list of the best of them below, which you can start playing right now: This title became Sega’s main game and with which they were able to face all the success of Nintendo and Super NES. It is a blue hedgehog that was moving through several fields at full speed, where you will have to walk through Green Hill and go collecting all the golden rings and avoid being caught by Robotnick. This game showed what it meant megadrive, who was characterized by his speed to process the sprites. It should be noted that this game is a street of rage sequel, but with this second season launched on the market, he managed to make it the most popular of the Saga thanks to its entire history. This title deals with the concept of street fights led by certain bosses and gangs of mobsters. Your objective will be to put an end to all this and expel these gangs from the city. A classic game that is worth remembering and that will help you have fun times. There is no doubt to speak of Golden Ax is talking about Megadrive. If at any time you played with Sega, you most likely played this great title that to this day is still considered one of the best on this platform. In this case you will have to choose between three characters for your adventure, as it is a dwarf, a barbarian and an amazon to try to end the mandate of Death Adder.

The Revenge of Shinobi A game with a lot of action where you will have to put into practice all your ninjutsu techniques to stay alive. This is how you’re going to handle the character of Joe Musashi and with him your mission will be avenge the death of your father, who was a master of martial arts and save your girlfriend who has been kidnapped. To do this, you must end the lives of eight different characters and thus return peace to the city. It is a game that takes place in the third person with a aviation simulator. This is how here you can enjoy a three-dimensional perspective that was very innovative for the time of its launch. A very futuristic game at the time that featured graphics and scenes very interesting that managed to capture the attention of many users of this platform