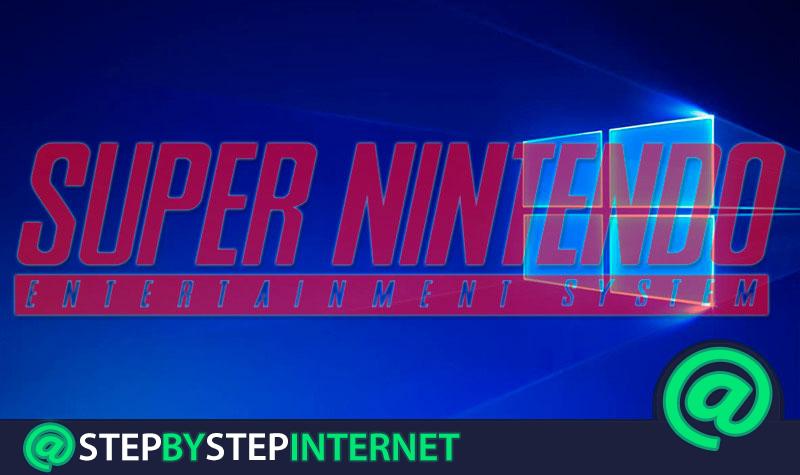 The console known as Super Nintendo Entertainment System or SNES was launched in the early 1990s and was maintained until 1999. That is, during all this time, I managed to offer a great gaming experience to many children and young people worldwide.

Therefore, games like Super Mario or Donkey Kong are very important for those who grew up together with them at some point. Therefore, they are special and although this console is already very obsolete, users want to find some way to enjoy these games and remember their childhood or adolescence.

For this, emulators have been created that offer the same gaming experience , just as if you were using one of these consoles of yesteryear. But, from the comfort of your PC and very easily. Then the best options you have for it.

To begin with, it is valuable to clarify that an emulator refers to a type of software that allows you to run different programs or, in this case, various video games on a platform different from that for which they were designed or registered in a principle . Which means that, these programs allow you to enjoy the gaming experience in an operating system for which a title was not originally created.

Now, given that the golden age of video games began its boom since 1990 with the SNES , many emulators of that console have been created for PC. Especially, thanks to the demand of users who love to enjoy these entertainment programs and, above all, because share a great love for this Nintendo console . Which, has been discontinued and although many users retain it, currently reveals an operation that can be forced and undoubtedly cause discomfort.

Therefore, we have made this post so that you can relive in the best way, those titles like Super Mario, Mortal Kombat 3, Donkey Kong Country and many more, from the comfort of your Windows computer and without even paying a single euro, just by using the following SNES emulators that can be considered as some of the best on the market, nowadays >:

Free and compatible with Windows 7,8 and 10 , as with other operating systems such as Mac OS, Linux and Android, this is one of the main emulators of SNES that presents the ability to run programs converted to dynamic libraries called “ free cores “.

So, thanks to the fact that it uses different release cores, it not only adds support for classic SNES games, but, as if that were not enough, makes it easier for all users to play other titles released on recognized platforms like Game Boy, Nintendo Wii, 3DS, Sega Dreamcast and Game Cube. Thus, a very complete option, since it does not limit games for a particular console.

In addition, it includes support for different controllers with a great variety and facilitates a very clean interface where the user can select and play various classic games on the console. Among other details, RetroArch has advanced features such as network games, shaders and rewind. It allows you to stream and record your game to streaming platforms like YouTube or Twitch , natively.

Another of the best emulators of this type for Windows is ZSNES which is also compatible with Linux and free in both cases. For starters, it is a software that provides excellent emulation accuracy and thanks to that, it gives you a very complete experience. Taking into account that, he is the pioneer of emulators of Super Nintendo SNES and, in addition, he is the first to add diverse functions and features.

Therefore, it is considered a great reference around the emulators of such a console and through it, other emulators were developed that adopted most of its functions. These, are based on a perfect smoothing and image scaling, also allows to increase or decrease the game speed , as well as save screenshots on the computer, it has storage spaces, video recording and network play.

In short, has filters to optimize game output , has a long list of recently played games, because it runs a good follow-up in reference to the 10 most recent games that have been played In the emulator. It also has a user interface very simple to use, but graphically, it is not very nice and, therefore, the menus are not. However, despite the fact that its latest version arrived until January 2007, today it is a program with enough capacity .

Officially, this emulator supports Windows and also others like Mac OS, Linux, NetBSD, OpenBSD, FreeBSD, etc. Which, is high precision and allows you to enjoy the vast majority of SNES console games without any limitations and completely free. In addition to this, is a RetroArch core emulator , so you can also use this, in case you do not want to configure RetroArch that, sometimes, you can be annoying.

Now, in terms of its main features, the emulator includes good functions such as textures scaling and network play , as well as specific palettes specific to the game you want, it features trick support and also from Famicom microphone . Therefore, it is estimated as an ideal choice for any fan of Super Nintendo SNES games .

For its part, it facilitates a simple configuration on Windows computers and also contains a completely easy user interface , so you can install and run games of any category, in just a few minutes. It also adds VSync support , but if you use this function, the program will show a noticeable entry delay. However, it is an emulator that had updates until 2008.

Ideal for Windows and also Mac OS and Linux, SNES 9x is a very simple to use emulator that allows you to play any of the SNES console titles on your computer without any limitation . Taking into account that, it stands out as the best emulator option for low-end hardware devices, even though it offers several very advanced functions and features, with only 2 MB , in reference to the space that occupies.

Now, detailing its main and most important features, this emulator has the ability to output image processing for better graphics , includes 10 save points, allows you to easily record your games , add network play and, if that were not enough, it contains a very relevant function with which it is possible to load several games at the same time and switch between them in real time.

It should be noted that this emulator does not need any significant adjustment and, best of all, allows users to launch games after the first extraction, immediately. It also has a large selection that adds all the SNES titles and is able to execute them virtually , gives the possibility to make rapid progress to accelerate the games and has special features that are based on Snes9k or Snes9x Direct3D .

To conclude this list, we recommend using this great emulator that is available for any version of Windows and is also compatible with Mac OS and Linux. Which, in addition to including the wide variety of games on the SNES console, also supports multiple more consoles , including Famicom, Game Boy, Game Boy Color, Game Boy Advance and including 8 systems most highly recognized.

For its part, Higan contains excellent functions and features that ensure better performance and accuracy during emulation , having a balanced version with which it intends to achieve the best emulation by consuming the least possible resources in the computer. However, is not the best solution for low-end or older devices , as it also stands out for being a demanding emulator.

In addition to this, it presents the ability to execute all Super Nintendo SNES commercial titles, without any exception, offering the highest possible accuracy that, without a doubt, allows you to have an experience completely similar to that of the original hardware Therefore, it must be considered as an exceptional option for SNES game lovers.

Other alternative websites where you can download different emulators:

Where can we download the Roms of Super Nintendo games to play on the PC?

While it is true, emulators are the programs that manage to perform all the functions of a console, in this case of the Super Nintendo, to play on a Windows computer. However, once you have “the console” on the PC, the games that are the most important to maximize the experience are missing. Which, are known as “ROMs” , that is, emulators boot ROMs .

These ROMs refer to the contents of the cartridges, tapes or diskettes that were previously used in this type of consoles to run a game . But, physically on PCs, these are binary files that can be loaded into memory . Which means that, it is considered a file that does the same functions of a CD, tape, cartridge, etc. To, for example, be able to play Mario Bross .

Now, to find these ROMs , there are currently a variety of websites offering these games and for the benefit of users, most of these online platforms contain the games from all consoles that have existed since video games expanded worldwide , practically.

However, many of these are unreliable and operate under the sole objective of displaying malicious advertising or introducing any type of virus on your computer. Therefore, here we present some of those that are considered free of danger and contain a good amount of titles :

CoolROM : Here you can find various ROM files, as well as emulators and tutorials to guide you through the experience.