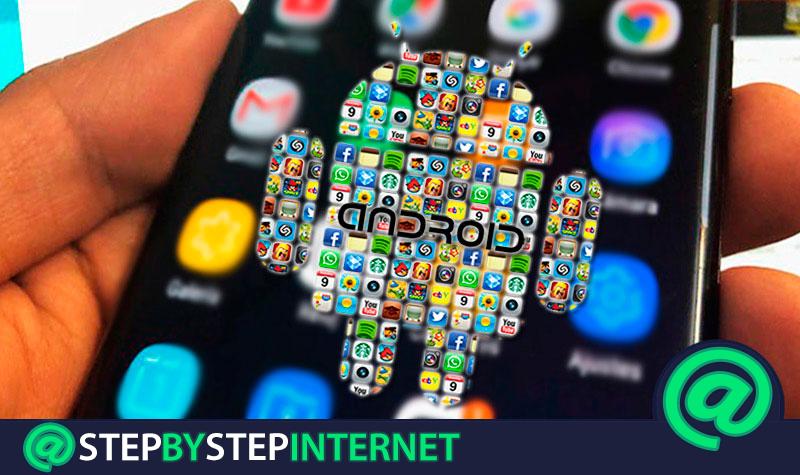 It is no secret to anyone that Android is the leading mobile operating system in the world market and thanks to this, occupies the first place among mobile device users , since it already has more of 2.5 billion customers. It is even a more used proposal than the same OS for computers, such as Windows.

In this sense, Android is also considered as the one that occupies most of the mobile applications market . Taking into account that, currently, it is known that more than one million apps for Android are already downloaded, above iOS. Reason why, more and more developers are interested in working with Android applications and bet on them.

However, many do not dominate the Java language perfectly, which is one of the main ones to create apps of this type. But, fortunately, now there are several ideal tools for Android application developers , which allow them to be created without using Java or Android Studio. Next, learn more about this.

What are the most used programming languages ​​in the creation of mobile apps on Android OS?

But, before starting with the best tools you can use to develop Android apps, it is valuable to consider which are the main programming languages ​​when creating applications in this famous mobile operating system .

So, next we will indicate the most used computer programming languages ​​for it:

As we indicated earlier, Java is the language to program most used in Android. Therefore, it is identified as the native language of this operating system and thus, it is distinguished by being very widespread, since it is present in a large number of devices, both on the network and locally.

It is appropriate to highlight that, in addition to allowing you to make applications for the Google system, learning to program in Java also offers you other possibilities such as developing desktop programs and even video games . It should be noted that, Java is estimated as a n totally robust language , has a Neutral Architecture, offers Object Oriented Programming and can be used with Android Studio, Netbeans, Eclipse, etc.

It refers to a different proposal to the one mentioned above and is defined as in a web language with development platforms from which it is possible to compile, natively, with the ease it provides the renowned Java language.

With regard to its operation, it basically consists of writing the instructions in JavaScript and then Titanium is responsible for “translating” it into the native language , by itself. Thanks to this, in addition to working on Android, it is also ideal for Windows 10 mobile and iOS.

For its part, JavaScript is characterized by containing a large number of tools to create various types of mobile apps , it has the ability to run on most hardware devices, since it is a programming language multi platform. Additionally, it has support for Object Oriented Programming.

This is a more modern or younger programming language , which was developed by Google and since then, it works perfectly with Android and Java. Given that, it is inspired by Java, C ++ and its precedents, so it can be considered as an improved version with powerful features.

Among other details, Kotlin has a much cleaner syntax and allows you to solve a problem by writing less code. Apart from this, this computer programming language stands out for being very concise , it allows you to avoid errors inside the classes of your project or app, it can be used in any Java IDE (especially in Android Studio), is relatively simple and also supports Object Oriented Programming.

Over time, it has been identified as “the Java dance partner” , given that they can work together and XML is a brand programming language based on tags . In this sense, it allows you to store information and data in readable form for both computers and humans. Which is found natively in the renowned Android Studio program.

It is valuable to refer to that XML is also known as a schematization language . This, because with it you can develop the interfaces that you see in your hands with mobile applications, that is, it facilitates the creation of the elements that will be displayed on the screen of the Android device (buttons , letters, etc.).

Clarified the above in informative terms, it is time to start with the list in which we detail the main and best tools that exist, today, for the development of mobile apps on Android devices.

From which, such developers can obtain excellent results, as well as greater productivity and efficiency: 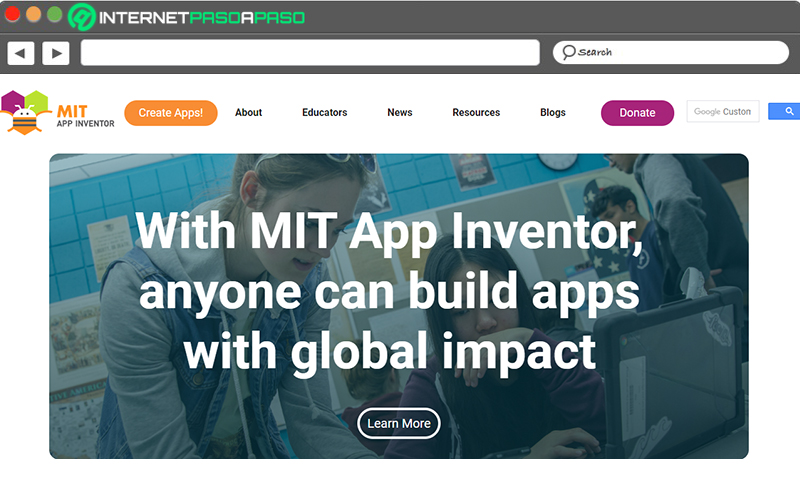 At the top of the list, we place the easiest tool of all when developing applications for Android phones and tablets, it is. Thus, is ideal for beginner developers who want to start in this world , thanks to the fact that it simplifies the development of these apps to the maximum and performs the entire process visually.

Once you decide to use this tool, you only need a web browser and a mobile device that operates under Android, it also allows you to use an emulator to test your apps, which you can install on your computer’s operating system. It is appropriate to note that was created by MIT and after that, was purchased by Google .

However, mobile applications that you can create through this system are considered extremely limited . 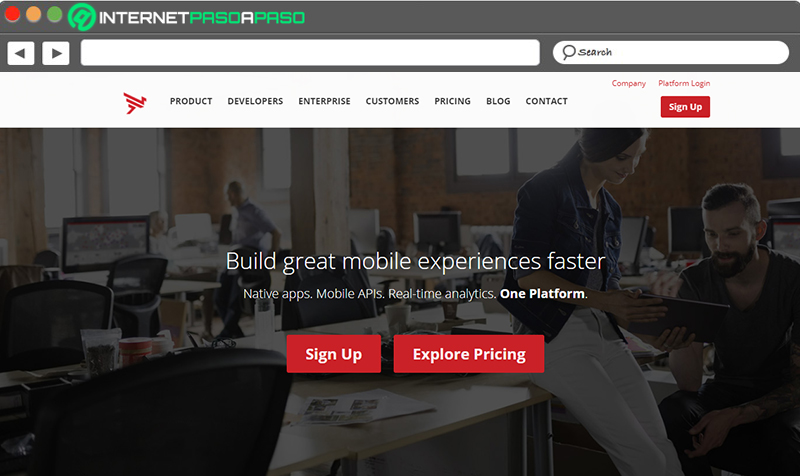 It is one of the most recognized tools to create mobile apps for the Android OS . Which, is based on a suitable software to develop these applications in a similar way to the native of mobile operating systems. In that sense, it uses the recognized JavaScript programming language and with it, it is responsible for translating the programming to the rest of the systems, automatically.

For its part, thanks to its optimal features, this service already has more than 20,000 applications developed and more than half a million active developers worldwide. Among its particularities of greatest interest, we find that it enables the treatment of apps interconnected with both software and hardware, thus enabling the use of micro, GPS and camera.

However, at the time of layout, the tool exhibits remarkable complexity . Because, it does not have an initial HTML where to enter the controls. 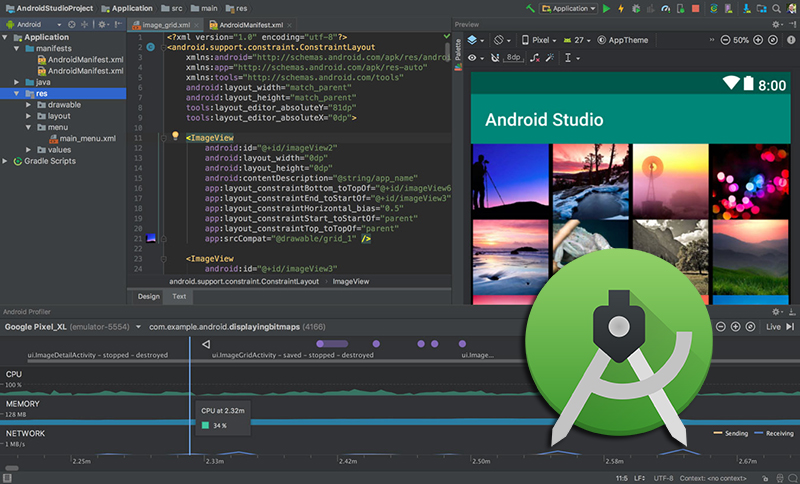 Without a doubt, it is another of the most famous options to create and develop apps for Android. Thus, the official integrated development environment (IDE) of this mobile operating system, which is only aimed at development of all kinds of mobile applications . Since, add everything that is required when creating truly complete and powerful applications .

For its part, Android Studio is based on IntelliJ IDEA and presents the ability to natively support the renowned programming languages ​​ Java, XML and Kotlin . Which means that, it allows you to develop your own apps from any of these languages.

It is valuable to refer to that, This program is perfect for developers looking to create applications in accordance with Google Material Design and with access to all the advanced features of the platform:

But, unfortunately, the requirements are a bit high and for that reason, you will have to have a good machine so that the emulator contained therein works for you. 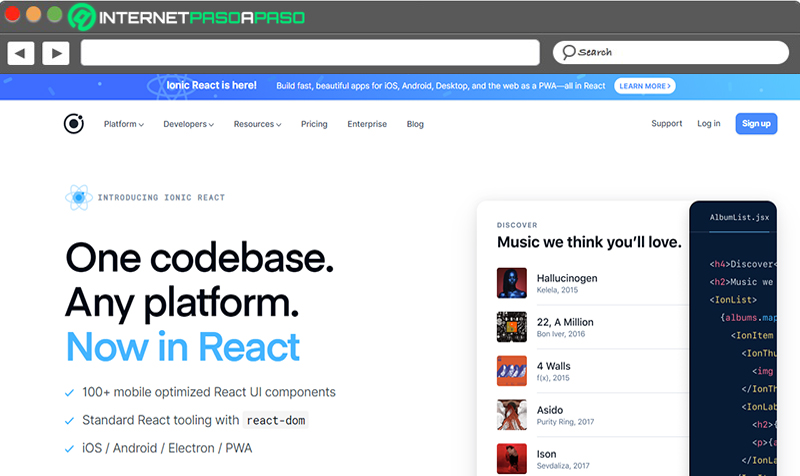 Basically, it is a framework that is based on Apache Cordova and Angular2, which enables the development of hybrid apps for mobile devices . That is, it supports the creation of applications based on JavaScript, HTML and CCS. In addition to this, instead of using native elements, it is rendered within a WebView or they are developed as if you were on a website.

That is why, if you have good knowledge about web development , Ionic is the best tool for you, to be able to create applications aimed at Android without any complications.

This service, is characterized by having a series of components that, when joined, meet the desired objective of the application you are creating:

However, in order to optimally manage this service, you need to learn very well about it. Therefore, is not a good alternative for beginners and for those who do not know the programming with JavaScript, HTML or CCS. 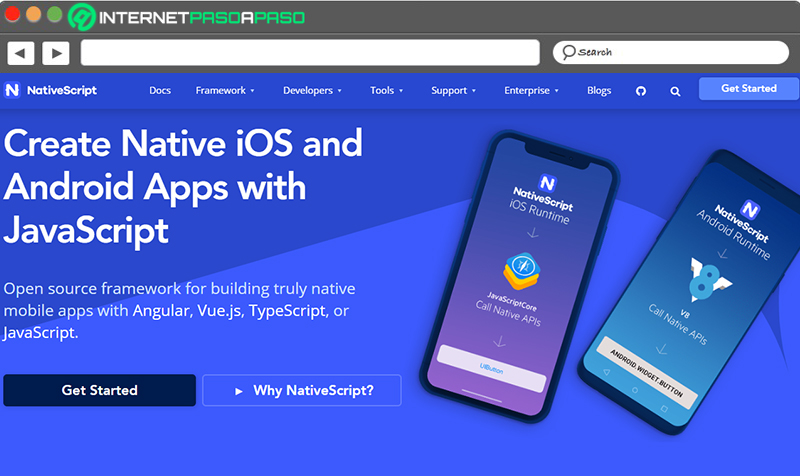 Today, this is one of the most used tools to program apps aimed at Android. Which is based on an open source framework or “open source” that exhibits the ability to develop native mobile applications using extremely popular technologies among web developers, such as JavaScript, XML and CSS .

Now, detailing its particularities of greatest interest, we highlight that this optimal service uses the TypeScript language , but unlike other frameworks, it is responsible for rendering the graphical user interface through a native rendering engine included in the same platform. Therefore, it does not make use of an added web page viewer, like other proposals.

But, it is valuable to note that in NativeScript you cannot reuse a good part of the web code . Reason why, the mechanism to produce the views is not exactly the same, but has a taste more similar to how it is developed in Java for the Android. 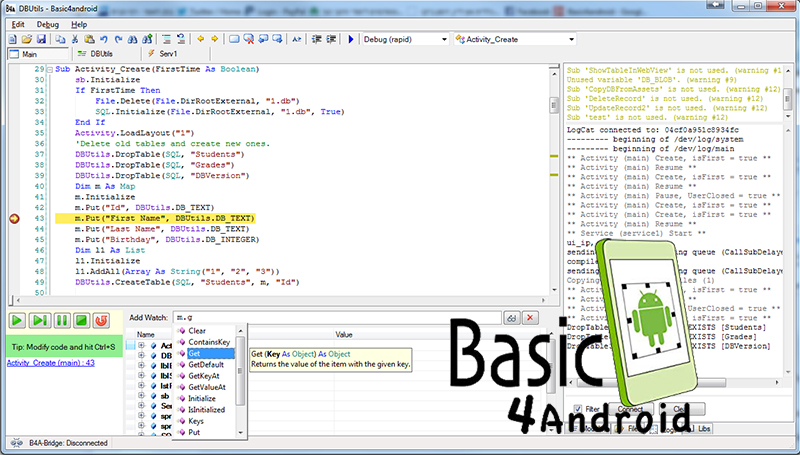 This is a program developed with the renowned programming language Visual BASIC , which has been characterized as one of the main rivals of the famous Android Studio. Given that, Basic 4 Android emerged as one of the greatest competencies for such software and of course, it is also especially suitable for all Android app developers .

For its part, Basic 4 Android has the particularity of providing a much more graphic and less abstract environment , so that developers who use the tool, see the progress of a easier way while programming.

However, the lack of support for object orientation has been noted in this software. 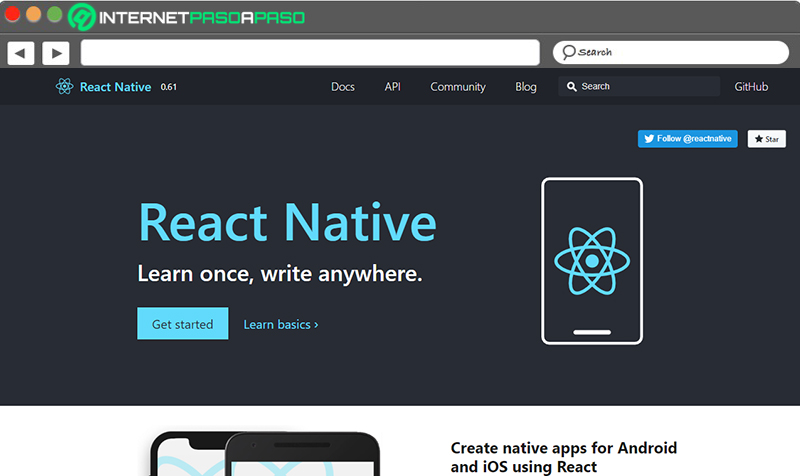 It is based on a framework developed by Facebook itself , seeing the great boom that has taken the market for mobile applications, especially those that are aimed at Android. It should be noted that, through this mechanism, the official mobile app of said social network was programmed in its entirety and also others such as Skype, Instagram and Uber .

Among its most relevant features, we refer to the fact that it is a powerful framework with the ability to create and develop native applications using the famous JavaScript programming language together with the ReactJS library in a very simple way. Since, this tool facilitates the process of developing any type of app.