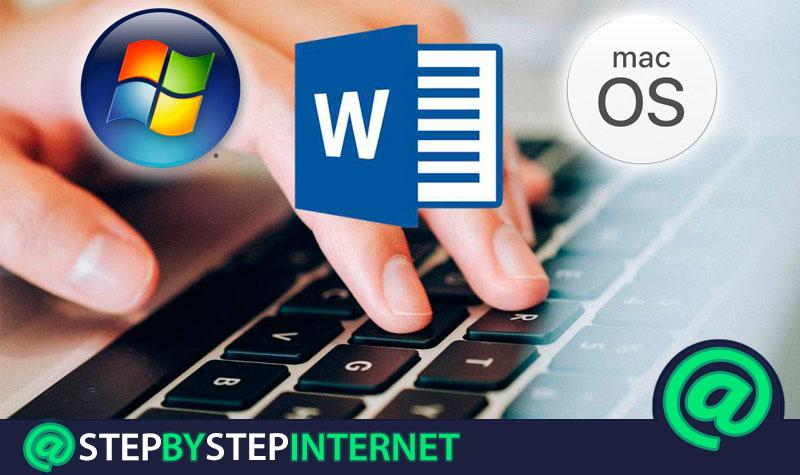 Microsoft Word is one of the most commonly used programs worldwide and in almost all operating systems. This is due to its great utility when you want to create a specific document.

In this way, knowing each one of its shortcuts is one of the most important tools, this will allow you to work on it in a much faster and easier way. It is also important to clarify that these key combinations work according to the language.

That is why here we will explain what are all the shortcuts that you can do within Word when making a document. Both in the Windows and Mac operating system

It is important to mention that the key combinations will basically depend on the operating system you are using, as well as the language of the Microsoft Word program . Basically these shortcuts will help us save time and allow us to work much faster without the need to use the mouse.

Read moreHow to customize the Outlook inbox to the fullest? Step by step guide

These key combinations are responsible for executing actions or commands specifically and at great speed, simply by pressing two or more keys simultaneously. So, here we show you the main Word shortcuts for both the Windows and Mac operating system.

In the case of the Windows operating system we find the following key combinations when using the Microsoft Word program.

Shortcuts using the “Ctrl + other key”

The use of the Ctrl key in Word is the most common, through it we can carry out almost all the functions available within the program. In this way, here we show you what are the main shortcuts that you can do from that key.

Other key combinations using “Shift + another key” on Windows

The Shift key also allows you to perform some functions with which you will not need to use the mouse . Here we leave you the main shortcuts from the repeatedShift•.

Use shortcuts for the basic functions of Word

The following functions are the most common when using this program, usually they are used every time we create a Word document.

Shortcuts for text formation on Mac

Keep in mind that when creating a text document, its formation is essential, for this you must take into account that this well structured, which will allow a good reading of it. Therefore, the following shortcuts will help you make a good layout in the body of the document.

Characters are one of the most important pieces in a Word document, to handle the use of fonts, size, bold, underlined , among others it is essential to give the text a good appearance. In this way, here we show you the main shortcuts that will help you carry this out.

How to change and customize shortcuts and shortcuts in Microsoft Word ?

The shortcuts of the Windows and Mac keyboard in Microsoft Word for people with visual or physical disabilities , is considered one of the most complete today. These methods are very easy to use especially in touch screens and that practically nullifies the need to use the mouse to be able to develop a specific function.

Most commonly used shortcuts in Windows

Scroll in the ribbon via the keyboard

The Word ribbon is nothing more than the tabs located at the top of the screen, each of them offers different options and are composed of different groups, where each of they include some commands. Being able to access each of them from the keyboard is possible, for this it is necessary to use the shortcut and which can be carried out through in two ways:

Use the ribbon command with the keyboard Windows

Use the access keys to view the KeyTips in Windows

To be able to use the access keys you must press the “Alt” key. Then select the letter shown in KeyTips you want use.

Depending on the letter you press, the corresponding KeyTips will be displayed. For example, if you press the “Alt + A” keys, “Office Backstage” will open where you have a set of different KeyTips , if later press “Alt” again the KeyTips.

This allows you to create and edit documents within Word to be able to edit it in the best possible way without using the mouse.

Key combinations to create, view and save documents

Combinations of keys to print and preview of the document

Shortcuts to search, replace items within the document

Keys to move between the document

Keys to mark a table of contents or insert table

Modify, move texts and graphics with the keyboard in Windows

To be able to select the text within the document, you must press and hold the Shift key and with the help of the arrow keys select the corresponding text.

Keys to extend a selection

Shortcuts to delete text and graphics

Shortcuts to copy and move graphics

Shortcuts to move within a table

Apply formats and characters within a paragraph through the Windows keyboard

Most commonly used shortcuts for Mac in Microsoft Word

Move the cursor using the keyboard on Mac

Keys for selecting texts and graphics on Mac

Select texts and graphics in a table on Mac

Keys for editing text and graphics

Align and format the paragraphs