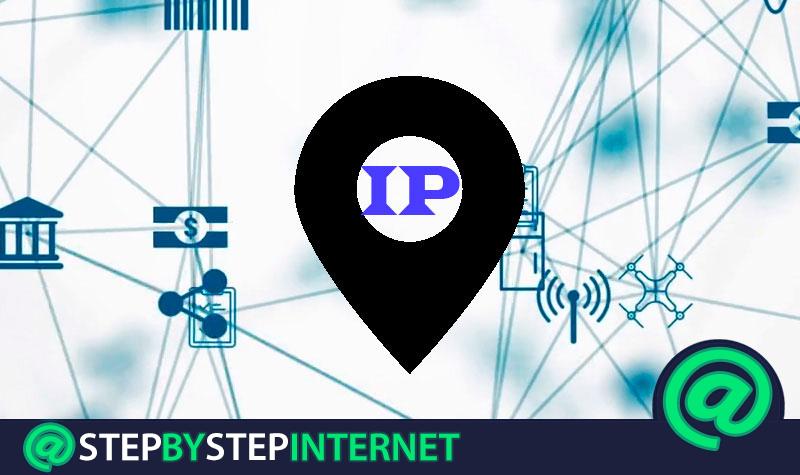 Here you will be able to know what is the IP of your connection to Internet in addition to many other interesting information such as your location where you are accessing, from the country, region, city and even your zip code, thanks to the geolocation of IP through latitude and longitude, information that is possible to know knowing your public IP address .
Read moreWww Betus.com.pa Login

Next you have geographic information of your IP , where it will help you to check the current geolocation of your IP address in a quick, simple and very visual way. It should be known that the data that the IP locator shows on the map using the latitude and longitude coordinates are not accurate and the result is approximate, therefore, they should be taken as estimated data.

What is an IP address and what is it for?

Read moreHow to see the recycle bin in Outlook and know where it is to be able to recover deleted messages? Step by step guide

An IP address is a numerical value with which a device is identified within an interconnected network. This is an indispensable element that is part of one of the most complex processes within the protocol as is the addressing . This refers to the way in which each address is given to each team.

These addresses are not fixed and may vary depending on the network you are in or according to the maintenance given to it. In fact, a device can have two addresses depending on the way it is connected , making it possible for a device to use ethernet and WiFi to be identified with two of them.

How many types of IP addresses exist and what are they?

The Internet protocol is one, but it can assign different types of addresses to the computers that make life in a network. Next we are going to present you all the types that exist and their differences with the others:

The public IP address is a numerical value that is given to a computer and is freely accessible to any user even though it is outside the network. In a way, is the identifier that everyone can know from a computer .

These in turn are divided into two types that you will know right now:

Private addresses are those that are known only to users of a network and generally of the specific equipment being used. This is created every time you use or connect any of your devices to a WiFi network for example . These are usually classified into classes according to their use:

IPv4 and IPv6 What are they and how do they differ ?

You’ll probably wonder what happens with the IPv4 and IPv6 addresses. Well, these are not types of addresses as such, but versions of the same protocol. The Internet Protocol has evolved throughout its history, and multiple versions of it have emerged, however, users have only known 2 of them, which are the ones we just mention .

This has created all kinds of suspicions since the first 3 versions of the protocol were never public use. When version 4 was launched directly, Another thing that also causes controversy is the fact that there is no version 5 of the protocol , since it was never fully developed, and it was again he made people aware of version 6.

This is a protocol that is identified by granting IP addresses of up to 32 bits . This is the most commonly used, but it has a supply problem since the number of addresses it can grant with 32bits is very limited.

This version is born solely because of the need to obtain more addresses. As we mentioned earlier, version 4 has a 32-bit address limit that it can grant, and these are already being exceeded by demand. Version 6 has 128-bit addresses , which allows you to create up to 4 times more addresses than with the previous version.

Comparison table between IPv4 vs IPv6

* If you are viewing the web from your smartphone, slide the table to the right to see all the data

Why do I need to know my Internet Protocol address?

The reality is that the user does not interact directly with anything that happens internally in the protocol, however, one of the most searched answers on Google is «How to see my IP?» or “How to know my IP?”. This makes you wonder Why locate an IP address? Well it’s very simple.

Many Internet services such as MMORPG video games (Massively Multiplayer Online Role-Playing Game – massively multiplayer online role-playing game) or tools need to know this information in order to help you. That is why most people care about knowing this value.

You already know a lot of related technicalities with this important protocol. Now we are going to show you how you can know all the IP addresses linked to your computer. What you should do is follow the steps that we indicate in the main devices currently used.

To know this value in Windows you have several methods, but I will show you two that are very easy and that I applied to know my IP address. The first option is to do it from the system information.

Another way you have is using the console:

On Mac the process is very similar to the one we just taught you in Windows. You can easily do it by opening the «System Preferences» window and once you are inside it, click on «Network» or «Network». After that you will see a list of all the connections you are currently linked to, and you will simply have to select yours to see the information on it.

Linux is an OS that is complicated for many people, so they are always looking for «How to view IP on Linux» on the main search engines. What you need to do is simply dial the « Ctrl + Alt + T » that will automatically open the terminal of the operating system. Once there you simply have to execute the «sudo ip addr show» command and after that enter your administrator password to see your IP information.

Android is a very simple system to use, so the processes that the user runs on it are also. To know your IP, what you should do is simply go to «Settings»> »About the device»> »Status». Once there you will see a section called IP, which gives you both the private address and the public.

In iOS the process is similar to that of Android. What you need to do is open the “Settings” of your device and enter the “WiFi” section. After that select the “i” </ strong> that is next to the connection you are using and you will enter the details of it. In the “DHCP” section you will see your IP.

From an Online tool

Another way to know this information from any device is with the help of an Online IP calculator like the one found in above . Just by entering this same page from your desktop or mobile, you can easily know the address of your Internet Protocol.

Certain doubts accompany this type of concepts, in order to delve deeper into the topic we leave you some questions with their respective answers to clarify other related terms and definitions.