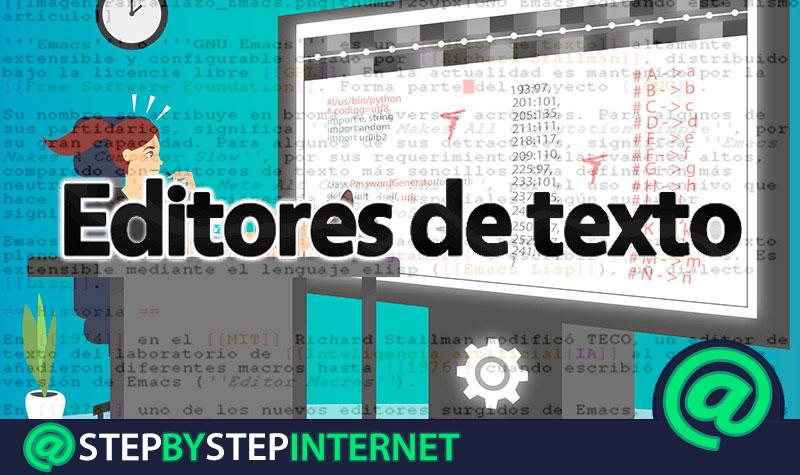 For many years, the creation of digital documents is completely important in the world of computing. Since, these types of writings are the ones with the greatest distribution in the network and are also widely used in many areas of daily life, for example, academics and professionals.

However, all this would not be so easy if the famous text editors did not exist. Because they are very useful tools that allow you to create and edit or modify text in various formats . Which are usually provided along with operating systems and software development packages.

In this sense, text editors also allow you to perform other types of tasks in a very simple and fast way . To learn more about them, we recommend you continue reading this post where we also provide you with 10 of the best alternatives that exist as text editors.

What is a text editor and what can we do with one?

Basically, text editors are computer programs that have the ability to edit digital files in a basic text or plain text format. These, in general, are known as “text files” and so, they are read by the editor program that is responsible for interpreting the decrypted bytes according to the character code that uses that software.

As we indicated earlier, these text editors are offered together with operating systems , usually and also in software development packages. That way, they can be used to change document files, configuration files and programming source codes.

For its part, it should be noted that, through an editor of this type, you can perform different actions because they are specially oriented to manipulate and create plain text files.

Therefore, they have enormous utility, which we detail below:

Before starting with the list of the most optimal text editors that currently exist, it is important to narrow down some of the typical features of these programs. That way, you should know that text editors offer extensive features for search and replace text , as well as for cut, copy and paste .

They also let you undo and redo (such as word processors) and those that are more modern, support filtering to sort a series of lines alphabetically or numerically , contain data transformation and extensibility to be customized according to the needs of the programmer.

Now, it’s time to know which are the best text editors, today , to create online files in different formats.

Next, we present in detail 10 of the best solutions there are for it:

This is a text editor that is included in Microsoft operating systems , since 1985. Thus, the equivalent of the MS-DOS editor edit, but in Windows . In that sense, it has a very simple functionality that is based on the online setting, the insertion of current time and date by pressing F5, just like in case the document starts with “.LOG” .

Added to this, also known as “Notepad” , gives you the possibility to export any formatted text, that is, is very useful as an emergency resource for schedule . It should be noted that, it has become the preferred application for web designers, it is used to write texts as e-mail drafts and its greatest advantage is the possibility of writing texts very quickly .

This is the source code editor for Windows, which is considered as the most popular advanced text editor on the market . This, thanks to the fact that it is a completely free program for all its users, that is, without fees and in addition to that, offers powerful editing components.

Taking into account that, it allows all developers and content creators to take advantage of it, thanks to the fact that comes under a General Public License .

We also highlight that it has easy to understand and very powerful customization tools even for the most advanced developer, in addition to its interface allowing you to switch between tabs and thus, manage multiple accounts simultaneously . Among other details, we indicate that it offers a list of plugins to optimize its functionality, has autocomplete options , is multi-view with highlighting and syntax fold, etc.

It is a text editor that, strictly, works with MacOS and although it offers you a free download, you can also buy its Premium version for around 56 euros. Although it seems very simple, the truth is that it exhibits great functionality, starting because allows you to customize almost any element , be it changing the language, adjusting workflows, etc.

For its part, this lightweight text editor with an intuitive interface , supports all programming languages ​​and offers you a tool for Xcode projects. It also has search and replacement tools, general administration and autocomplete.

In addition, you can generate macros to speed up the production of your processes and its search tool is added along with multiple cards to change and adjust several lines of code simultaneously.

It consists of an open source solution that is specially created and designed for developers. Therefore, it has a large community that contribute to the platform with plugins and themes. In this sense, it refers to a text editor that provides good collaboration tools and excellent organizational tools to manage all your projects .

In addition to this, it is considered a solution “cross-platform” , so it works in the vast majority of operating systems and provides a GitHub package to integrate and do things, how to solve union conflicts.

Among its greatest advantages, we highlight that all creations and editions in Atom can be done in real time , it is very easy to edit your code from the intelligent autocomplete of this program, along with a function search and replace, just like an optimal system file browser.

Created in 1991 and with support for Windows, Mac and Linux , this other text editor is considered one of the most stable and reliable. Which, was clearly designed to be used from a command line interface or CLI and also as a single application in a graphical user interface (GUI).

Thus, it stands out for providing a very simple system to manage with which all users who enjoy using plugins can expand their functionality.

Among its best features, it should be noted that it is a completely free and open source alternative that receives constant updates . It also has the most powerful functions in the market and it doesn’t matter what programming languages ​​you are using, because this program supports hundreds of them . It is also a good place to learn more about extensions, any new script or tools that arise.

Although it is a payment program that costs less than 80 euros, it allows you to make use of a free trial version before paying for it. Being one of the best editors of this type, since is extremely light when using very few resources and still keeps its most advanced functions optimized.

Among other benefits, Sublime Text allows you to make changes to multiple lines at the same time to find certain functions immediately.

For its part, supports several operating systems (including Windows, Mac and Linux) and with your license, you can use it on any number of computers. In addition to this, it offers you split edition to manage and edit files side by side, you can open multiple windows and locate them on different monitors, it provides simple and powerful shortcuts for faster speed, etc.

Refers to an extremely advanced text editing alternative for programming and also for web design control . In this sense, it is an HTML editor with excellent tools that, initially, you can use from your free trial. But then you will have to cancel a fee of around 45 euros so that its functions are not simplified.

For several years, CoffeCup has been listed as one of the best text editors with market themes and although they are not complete websites, some designs may be completely attractive to its customers.

Additionally, is considered one of the most visual text editors that offers a live preview to visualize what your code will create in the frontend and also provides a standard split-screen view.

Although it is not a free text editor, it can be considered a great solution because it offers user support and a large number of functions that can meet all the necessary requirements. It should be noted that, its price is around 96 euros and this will provide you with completely free updates. Being compatible with Windows, Mac OS and Linux .

This program is recognized worldwide for its extensive customization capabilities and remarkable performance, since is one of the fastest publishers of this type that you will find in the market .

Especially when it comes to locating and replacing files, and to choose and edit multiple code snippets. Apart from that, all its tools are configurable and contain several smart templates that can complete some of the codes, automatically, while you type.

Only used on Mac, this program offers you very advanced functions as a text editor and in the most basic way.

Among its main functions, we find autocomplete , in addition to it has a code fold and these two make its interface look much cleaner at the same time as issues faster when programming. Currently, its version costs around 50 euros so you can receive an individual license.

In addition to this, BBEdit has the ability to work with a wide variety of languages, has syntax revision for various scripts, provides quick searches , has replacement functions to adjust individual articles to what Over multiple files, you can insert attributes and tags to your code, just like add special characters while writing your HTML .