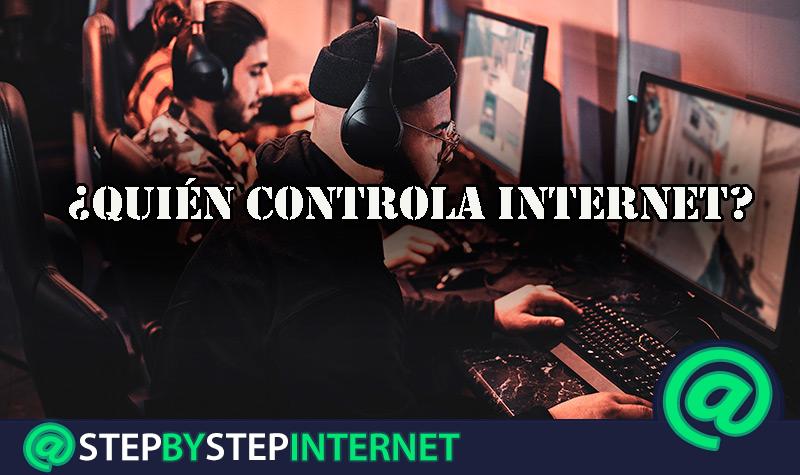 Nowadays, the internet network It is characterized by being one of the most efficient ways to search for information and increase communication worldwide. Accordingly, there is great doubt about this.

Who runs this huge network? And how do they do it? This network is made up of millions of computers and dozens of connection nodes around the world. Its function gives us a variety of utilities in our daily lives, whether in our work, study or personal use.

In this post we will mention the different corporations that control the internet, and what is the function that each one of them fulfill so that this network works in an effective and viable way for all users.

How does the Internet work internationally?

Internet It is a set of networks that interconnect the world, which improves communication and transmission of information. The networks that connect each end are known as optical fibers whose extension is distributed throughout the world, being managed by ICANN (Internet Corporation For Assigned Names and Numbers). Connections are made over an extensive wired network whose information is sent by means of light pulses, allowing all packages to be sent and received in real time.

Just like our home addresses are identified by number and letters, it also happens in the digital world, because each information is stored on a different server that is identified by a DNS and the information or website by an IP address. Although we do not normally make use of the IP addresses In order to investigate on a page or on the Internet in general, these are used, since it is the only way to indicate to the servers what information the user is requesting.

Likewise, the information that we see is encoded by a series of numbers that they are divided into packages and shipped disorderly by different networks. Unordered sending is to ensure the speedy transmission of information and avoid the collapse of the channels. Codes and packages are sorted according to the sequence of its structure and translate into images, videos or informative texts.

If a package arrived incomplete our same browser will request the recharge of the same, ordering a resend of all files. These fiber optic cables, They are distributed around the world crossing seas and mountainous sites, in order to connect all the parts. It should be noted the great importance of the political agreements that allow them to pass.

Governments regulate the operators. How much power do political powers have in the management and freedom of the Internet?

The Internet network is made up of a multilateral system. Therefore, consecutively they are celebrated governance forums from Internet between different countries, where governments, companies and network administrators can present and debate problems or suggestions regarding the security and privacy of the Internet society. Each company has a country code domain or ccTLD domain which is used on the website to help identify the country specifically.

On the other hand, the government is in charge of supervise and regulate telecommunications operators or Internet companies, which limits some communication options and creates problems between the standards possessed in large-scale technology. One of the reasons why it is a shared system, is for the idea of power that this network can grant before a government. Being such a huge network with countless qualities, you can put any matter in the wrong hands at risk.

In addition, it is considered that social networks can be taken for the use of any type of influence, both good or bad, you can add opinions that alter society or generate a revolution. This system protects from situations that may affect users, companies or even a country, such as: massive espionage, expansions of terrorist groups and cybercriminals, among other cases … What makes shared governance a secure and transcendent system among nations.

Most of these organizations are very unknown, however, they have a very important role in the virtual world of the Internet:

This American entity, ICANN, is in charge of distribution of domains and IP addresses, achieving that none is repeated and can be easily identified. A IP adress opts for a large number of numbers that are difficult to memorize, this organization turns those numbers into a Url address, so it organizes each page on its own site.

ITU was founded in 1865, and has been under the responsibility of the UN since 1947. It specializes in streamline the connectivity of communication networks internationally. This body is in charge of distributing radio frequencies, ensuring that telecommunication satellites do not collide with each other. It is also in charge of supervising large companies of any activity, with the idea that each nation has the same right in the network and reducing illegal activities.

The IAB deals with monitor standards network, monitoring the protocol TCP or IP and technical development to make it suitable and efficient for the network. This organization is based on security and privacy for Internet communication, with the function of continuing to grow with the highest possible performance.

This global organization is governed by a board of trustees, with the philosophy of an open Internet with its integrity and without any breakdown of the government or a company, focusing more on user rights.

The large operators how: AT&T, Vodafone, Movistar, Verizon… They grant Internet access to companies or establishments of a universal good, which means good control over the Internet.

Facebook, Amazon and Google What role do these three digital giants play in managing the Internet?

The reality is that the Internet is controlled and monitored by the US secret services, since everything that is uploaded to the Internet stays in the cloud and these hosting services belong to large companies such as Amazon, Google or Facebook. Therefore, the NSA and the CIA (Central Intelligence Agency) control all data that are stored on the Internet. These companies are considered “The giants of the Internet” due to the efficient service that each of these provide.

Being the ones widely used worldwide They could be called the owners of the digital world, since they are present in our day to day. It has in its possession the virtual profiles of its millions of clients, obtaining a communication channel with each of its users and a large amount of additional data.

It should be noted that they have a large advantage in Internet network and technology, Due to its high brand equity and financial strength, it has the cloud infrastructure management, machine learning algorithms, massive data analysis, cybersecurity system, among others …

In addition, each of these platforms offer exclusive Internet services, such as: software, electronic devices, biotechnology, telecommunications, online shopping, etc … With their growth they have been able to improve and have much more control in your own interests and those of the network. For example, Facebook besides being a social networkOver the years, it has appropriated networks such as Instagram, WhatsApp and companies that develop facial recognition technology, devices and photography companies.

Is the Deep Web the only “free” place on the entire Internet?

Deep Web or Deep Internet, is characterized by being an invisible web allowing to show or find all Internet content that, for some reasons, is not indexed by search engines on the superficial Internet, that is, it is not found on Bing, Yahoo, Google, among other networks … Academic Invisible Web, many people think that it is a dangerous or illegal website, since this network in addition to being smaller than the artificial internet, hides some technological and scientific advances

Deep Web remains hidden, using domains with .onion extension; These domain names are encoded with a HASH frame where there is no registration by a DNS server, but rather by a .onion domain. with a specific service. That is it does not use the UDP / IP protocol to identify web pages.

To enter the Deep Web you need a special web browser such as: Tor Browser, one of the best known browsers in this space. This is where the database used in deep web allowing to automatically detect the resources that are not linked to the surface web. There are several deep networks used to define all web pages that are not indexed by traditional search engines, such as: Dark Web, Darknet, Clearnet, among others.

Below, you will be able to see a map of submarine Internet cables around the world: