These computer gadgets they are a very important part for the human being, especially today when through them almost everything can be done type of activity. This is how it is currently used by governments, companies, merchants, student and public institutions, among many others.

And it is that these teams are formed by a large number of items and components they allow its optimal functioning. One of them is the computer case or case which serves to physically ride all the components inside the computer.

Bearing in mind that this is one of the most important parts for a computer, here we will explain a little more about what it is about and what its true function is on these desktops. For this, follow in detail everything that we will teach you below:

What is a computer box or tower and what is it for?

The computer case or tower as they are also known is nothing more than metal part where much of machine components as it is hard drive, motherboard, disk drive, optical drive, among many other elements that are present there. These housings usually come in shape horizontal and vertical depending on the type.

It is also important to mention that mostly these towers usually come with a built-in power supply. The main function of this case is to be able to store and protect each of the components that are present there, thus allowing each of those parts can work properly, especially what it is the central processing unit (CPU).

It is worth mentioning that not only do desktop computers have a box, but also laptops how tablets or notebooks are also considered as a box or case. The only difference is that for this type of equipment it is not so easy to replace said part, so your trading is not as common as on desktop computers.

History and evolution How have the boxes changed over time?

All this began in 1972 when the company of Intel manufactured the first 4004 microprocessor, thanks to this the way would be opened for what would be the computers at home. This is how other companies like Apple in 1976 and a year later Tandy and Commodore they promised manufacturing all of this equipment.

In this way Commodore's company would begin to provide each of its teams with a single block where only what was was the keyboard and the magnetic tape reader, whereas in the case of Tandy would include a TV and a separate cable. But in the case of Apple would begin to commercialize small quantities of these equipment but without boxes.

All this became the beginnings of these teams in the world, where most of Computers began to come on the market including a keyboard in a box. After all this would come what was the third generation, where it starts with the intervention of Amiga 1000 in 1985, at that moment desk boxes were opened.

With this new model of computers it would last several years in the market, until 1992 and 1993 when a housing separately what it was for the keyboard that was connected through a cable with the monitor. In this case the keyboard had to rest on a desk just like the monitor. The next evolution of these devices would occur in the years 1996 when the casing would try to be placed vertically, which allowed to increase greatly measure the volume.

Thanks to this it would be placed data storage devices perpendicular to the housing, managing to take better advantage of all the space. Since then the color of the case was beige with a rectangular shape. But from the 2000s the predominant color would become black. For the year 2003, the apple company decides to bet on the boxes with new designs and more colors, making them many more aesthetic, even achieving reduce their size.

Due to all this, the different companies dedicated to the subject have specialized in making cases that have a more pleasant and delicate appearancewhere a New evolution was that of the fan and noise. Can currently be found very small boxes with very large fans, this is because thanks to all the advances they have been achieving better manage space in them to offer a better organization from all parties.

What are the different types of case that exist in computer science? 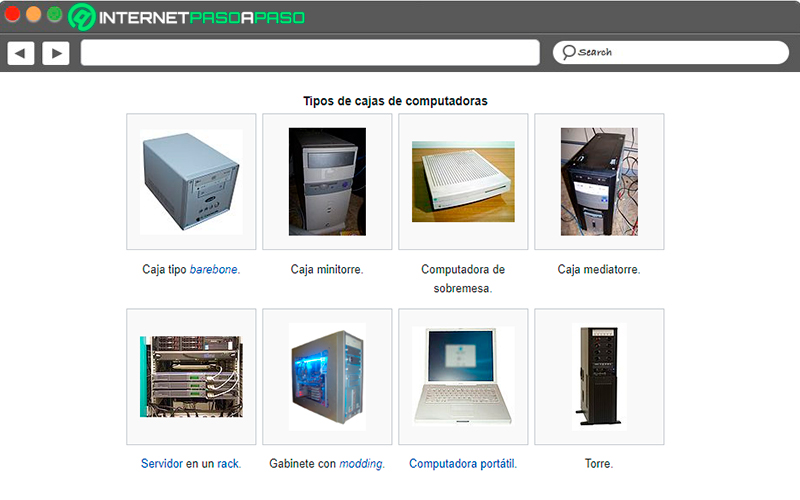 As previously mentioned, these boxes have presented a constant evolution that has gone changing its shape and sizewhere they went from being a robust housing to a more delicate and small. This is how we will show you below which are the different types of cases that exist in computing.

The server usually has more than one hot draw power supply, this will allow the server can continue its operation in case some of the two are damageds. Being so important and fundamental they should always be connected to a power system which will protect equipment of the voltage peaks and in case there is a power outage the computer will continue to run for a few minutes while the user can turn it off.

Parts of a computing tower What are all its parts? 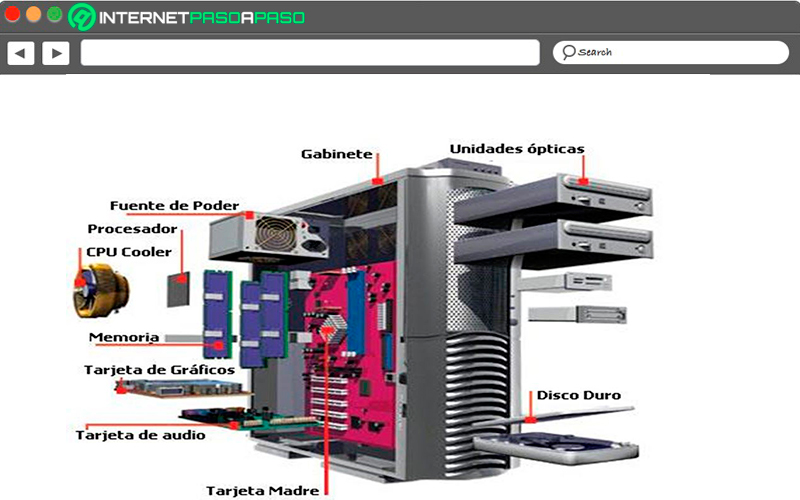 The computer case is that case that is responsible for storing a large number of computer parts and components and which are fundamental for its operation.

According to this, here we show you what are all the parts of a computing tower: