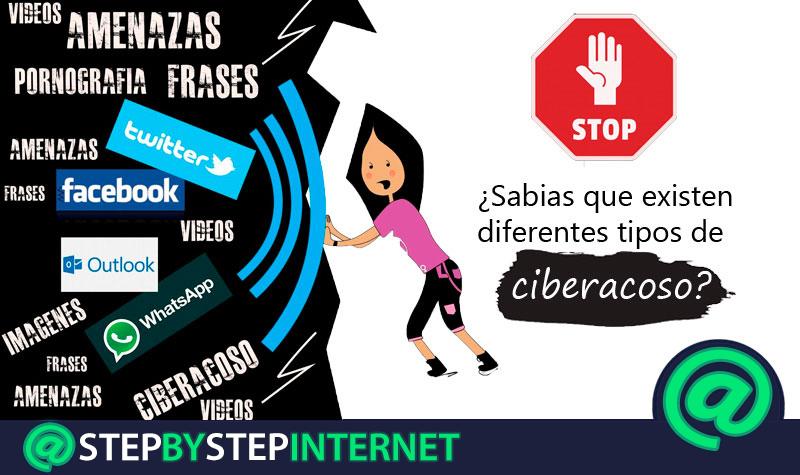 In any part of the web or social networks, there is a great possibility that you have suffered at some point some kind of cyberbullying, so you should know that this has become one of the most dangerous forms of harassment today day. The use of all the possibilities offered by the Internet, including anonymity, helps this fact to proliferate in society.

There are different types and this can affect the victim or her social environment in different ways. Therefore it is important to know the types that currently exist on the network, how they can affect you and the methods to protect you or any member of these stalkers.

For this reason and many more reasons, we are going to give you all the information you may need so that you discover when you or some other cyberbully is affected. In addition, we will mention some measures to take to prevent it from continuing.

What is cyberbullying? The greatest danger of social networks

Cyberbullying can be defined as those threats, harassment, humiliation and any other type of inconvenience caused by an adult against another, a group of people against another group or a single person . As well as adults against minors.

These use as technological tools harassment tools; mainly communication tools, for example: the Internet, mobile telephony, online games and various social networks, etc. It is said that there is greater risk in the latter since it is easier to contact the victim, in turn communicate and find all the necessary information that could harm her.

The World Health Organization (WHO) indicates that Spain is one of the countries where cyberbullying is most practiced. On the other hand, foundations such as ANAR and Mutua Madrileña for the year They published a report where they specify that:

There are different types of cyberbullying, these can be differentiated according to the intentions of the stalker, the type of damage they want to cause and the magnitude.

The latter is known according to the number of people that may be affected and the number of stalkers (participants) in the event.

Cyberbullying in the strict sense of the word

It is the harassment that exists mainly among adults. Although it can also be the case where an adult virtually harasses a minor.

Where, for different reasons and reasons, he has decided to perform such despicable acts, which can be punished according to their severity.

This type of harassment can happen among adults, adults with minors and among minors, aims to achieve sex with the victim or failing that with the dissemination of sexual material.

This can happen under threat of death, labor, family, school, university and / or monetary blackmail. There may even be the disclosure of personal and private information of the victim who is deceived or blackmailed . Where if it does not want such material to be disclosed, it must have sex with the stalker, in order to keep it silent.

This type of cyberbullying is considered one of the most dangerous and existing in social networks.

Also it can enter the diffusion of photos and videos deprived of the victim’s privacy. The already known “Nudes”. Here you can see reflected photos or videos of the couple in relation.

The latter can be known as “Sexual revenge” and it is a fact that can be punished.

This is the type of harassment that happens among minors. It mainly lies in the humiliation of the other, although in extreme cases it can be exaggerated where sexual requests, blackmail, request for money and something else.

It basically lies in the monitoring of the steps and all activity of the victim online. This fact can affect not only the victim, but also friends , family and possible couple.

Since the stalker in these cases, seeks to obtain all the possible data of the person. To thus know more about it and be able to act more precisely in cases of wanting to do so .

Bursting on digital platforms is more common than we think and the event becomes dangerous when the stalker begins to take direct action against his victim and begins to cause anguish, fear and other reactions.

Basically it is to deceive minors, this is done by pedophiles or pedophiles online thanks to different networks. The same is to gain their trust by simulating empathy and affection for them.

Are those tricks or methods that pedophiles use to attract boys or girls to encourage different meetings outside the network and in person, to know them better and then obtain sexual favors or sex. In more dangerous cases kidnappings, rapes and other extreme cases can occur.

By this we do not mean that sex between an adult and a minor is not something dangerous. On the contrary, it is an event that should be avoided and which is risky. But being an act conceived by the participants, the victim’s life is not at risk (many times).

In the same way all these meetings can and are punishable by law, and according to the seriousness of the same the sentence can vary.

It is a website that has been created to do cyberbullying on a minor, exercise harassment and / or ridicule the person in a public way. On many occasions, it seeks to encourage others to participate in the abuse.

It is that provocation through the use of insulting, defamatory, humiliating messages and more, which are sent to a forum, by mailing list or within a game. This aims to provoke altered reactions to the participants.

The word flame is translated as flame, and is the action that the provocateur seeks with his victim that it catches fire with anger and comes to have a pointless argument or fight with the stalker.

How can I protect myself and my children from different types of digital harassment?

In case you are a victim of any type of cyberbullying or your children, even if you suspect that a friend or relative is, it is important to find a solution immediately.

If you are a minor, the best thing you can do is tell your situation to an adult (it could be your parents, a teacher, a relative, someone you trust that can help you …) In turn, seek advice from other experts in the field so that they can act or know what to do in these cases.

You can go directly to a police, security or student counseling department to seek support and guidance. Do not hesitate to make a complaint at any time in cases of extortion, death threat, request for sexual favors, threats of rape, etc. It is important to stop the stalker, as he runs a high risk while that person remains free.

Depending on the type of harassment, a peaceful solution can be reached where the other person desists from performing such harmful and annoying stops without asking for anything in return.

On the contrary, if a calm solution is not possible and the acts of harassment are dangerous and enter the risky barrier, as previously mentioned some. The first thing you should do is keep as many tests as possible that can be used to prove that you have been cyber-harassed. These can be: images, audios, videos, emails, screenshots of the different conversations; whether they are text messages, WhatsApp, Facebook and other social networks that they have used.

All these tests can serve as material to prosecute the stalker and to absolutely demonstrate such events. Try to ensure that such information has as many details as possible, such as date and time.

Other methods to protect yourself from cyberbullying

Other ways you can use to stay protected is to change the security settings of your social networks.

For this you have different things you can do as they are: